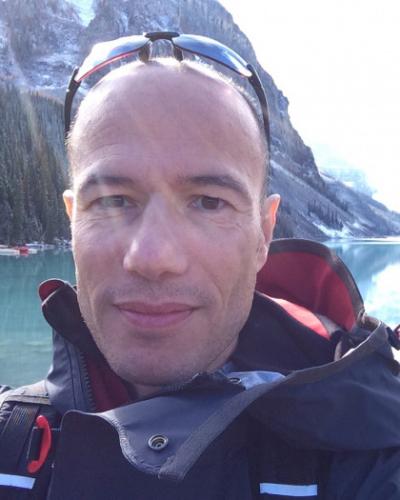 I am a Professor at the University of Texas at Austin in the Department of Geological Sciences (DGS) and joint appointments in the Jackson School of Geosciences (JSG) and the Institute for Geophysics (UTIG). I am a member of the core faculty in the Oden Institute for Computational Engineering and Sciences and hold the W. A. Tex Moncrief, Jr., endowed chair III in Simulation-Based Engineering and Sciences. At the Oden Institute, I direct the Computational Research in Ice and Ocean Systems (CRIOS) group.

Previously, I have worked for 16 years in the physical oceanography group in the Massachusetts Institute of Technology (MIT) Department of Earth, Atmospheric and Planetary Sciences (EAPS), initially as Postdoc with Prof. Carl Wunsch and most recently as Senior Research Scientist and Visiting Associate Professor. I earned my Ph.D. in 1998 from the Max-Planck-Institute for Meteorology and the University of Hamburg, Germany, working with Prof. Klaus Hasselmann on global ocean surface wave remote sensing and modeling.

My main research interest is understanding the general circulation of the ocean and its role in the global climate system. As part of the Estimating the Circulation and Climate of the Ocean (ECCO) consortium, we are applying inverse methods for the purpose of fitting a general circulation model with much of the available satellite and in-situ observations to produce an optimal estimate of the time-evolving state over the past few decades of the global ocean and sea ice. ECCO products support ocean circulation and climate variability research on time scales of days to decades. Emerging research foci are understanding the dynamics of sea level change, the provision of formal uncertainties along with these estimates and implications for improving the global ocean observing system for climate.

I have also become interested in the cryosphere. My group is improving simulations of coupled sea ice-ocean dynamics in the Arctic and the Southern Ocean. Furthermore, we are investigating the polar ice sheets, their dynamics, their interaction with the ocean, and their contributions to sea level change.

Since 2000 I have been responsible for the algorithmic differentiation-enabled adjoint code generation and maintenance of the MITgcm, the core machinery underlying ECCO. It includes a full sea ice model, biogeochemical, and an ice stream/ice shelf module. I have also been closely involved from he outset, together with colleagues at the Argonne National Lab, in the development of the open-source tool OpenAD.

Professional services include:
U.S. National Academy of Sciences Ocean Studies Board (since 2016) and its liaison to the Board on Atmospheric Sciences and Climate (since 2019);
NSF Advisory Committee for the Office of Polar Programs (since 2017);
NSF Advisory Committee for Cyberinfrastructure (since 2017);
co-chair of the international Deep Ocean Observing Strategy (DOOS) initiative (since 2017);
CliC/CLIVAR Northern Ocean Regional Panel (since 2018);
founding co-chair of the U.S. CLIVAR working group on Greenland Ice Sheet-Ocean Interactions (GRISO, 2010-2013);
U.S. CLIVAR Ocean Uncertainty Quantification working group (since 2020);
U.S. National Committee for the UN Decade of Ocean Science for Sustainable Development (since 2020);
WCRP Lighthouse Activity on Explaining and Predicting Earth System Change (since 2020).

I am science team member of NASAs Sea Level Change Team (N-SLCT), as well as member of the
U.S. AMOC science team. I am co-founder and co-organizer of the international UiB/MIT/UW Advanced
Climate Dynamics Courses (ACDC), held annually since 2009, and am involved in various national and
international collaborations.

Heimbach's research group (Computational Research in Ice and Ocean Systems -- (CRIOS)), in the Oden Institute is engaged in a number of projects, with main funding from NASA, NSF, and ONR. (1) Our overarching research focusses on understanding the global ocean circulation, its role in climate variability and change, and its predictability on seasonal to decadal time scales. As part of the NASA-funded "Estimating the Circulation and Climate of the Ocean" (ECCO) consortium involving colleagues at JPL, MIT, AER and Scripps, we are synthesizing much of the available satellite and in-situ observations with a state of the art global coupled ocean general circulation model by means of optimal state and parameter estimation. Results are used to infer, for example heat and freshwater content changes over the last few decades, and their impact on global sea level (via the NASA Sea Level Change science team). Related NASA-funded efforts focus on interpreting measurements from the existing and forthcoming GRACE (Gravity Recovery and Climate Experiment) and SWOT (Surface Water and Ocean Topography) satellite missions in deciphering key dynamical processes in the ocean. (2) As part of an NSF-funded project (Arctic & subpolar gyre State Estimate -- ASTE), we are developing computational frameworks for quantifying the role of the ocean in observed Arctic climate variability and changes over the last few decades. The framework also enables assessment of how to build an improved observing system in support of the Arctic Observing Network (AON) and the Study of Environmental Arctic Change (SEARCH). (3) Our group is also investigating the ocean's role in the observed increasing mass wastage from the two polar ice sheets. Two NSF-funded projects focus on quantifying Greenland ice sheet-ocean interactions (GRISO). In particular, an NSF Research Coordination Network (RCN) project is conducted in collaboration with Co-PI Catania (DGS/UTIG) and other collaborating institutions to improve interdisciplinary data access, standardization and curation and the design of a Greenland Ice Sheet Ocean Observing System.. (4) Optimal control methods play an important role in initializing geophysical models, which are constrained by sparse observations in space and time, for the purpose of prediction. As part of the DOE project PISCEES (Predicting Ice Sheet and Climate Evolution at Extreme Scales), we are collaborating with Co-PI Jackson (DGS/UTIG) to develop concepts for adjoint-based transient ice sheet model calibration, initialization for prediction, and uncertainty quantification. Applications have targeted some of the fastest evolving ice stream-shelf systems in the Amundsen Sea Embayment, West Antarctica. Climate change

Sophie A Goliber , Ph.D., expected 2022 (Committee Member)
Sophie Goliber has been a Geological Sciences PhD student at UTIG since August 2017. She completed her undergraduate degree at the University of Buffalo where she got into remote sensing and glaciology research. Her fascination with the cryosphere drew her to UTIG and working with Ginny Catania who shared her interests in using remote sensing methods and optical remote sensing...