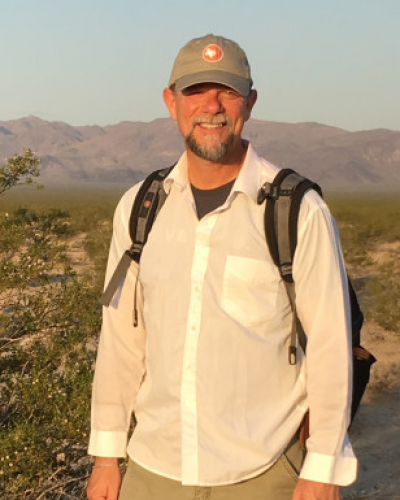 Dr. Michael Young is a Senior Research Scientist at the Bureau of Economic Geology, Jackson School of Geosciences, University of Texas at Austin. His personal research interests and experience are on the movement of water and solutes in arid and semi-arid vadose zones, water/energy nexus, soil/water/plant interactions, groundwater recharge and the connection between water resources, landscape development, and human interactions. Dr. Young has authored or co-authored nearly 100 peer-reviewed journal articles, several book chapters, more than 200 presentations at scholarly meetings and many other technical reports. He recently served as co-Editor of the Vadose Zone Journal and serves on numerous other committees in scholarly organizations. He was elected Fellow of the Geological Society of America and Soil Science Society of America in 2016.

Previously, he served as the Acting Executive Director of the Division of Hydrologic Sciences (he was also Deputy Director for 5 years), Desert Research Institute, in Nevada. He left DRI with the academic rank of Research Professor. He held assistant and senior research scientist positions at the University of Arizona and Georgia Institute of Technology, respectively, between 1995 and 2000, and has more than 35 years of professional experience. Dr. Young received his B.A. and M.S. in Geological Sciences at Hartwick College (Oneonta, NY, 1983) and Ohio University (Athens, OH, 1986), respectively, with a specialty in Hydrogeology at Ohio University. He earned his Ph.D. in Soil and Water Science (specializing in soil physics and hydrology) from the University of Arizona, Tucson in 1995. While at Arizona, he was named Research Specialist of the Year in the College of Agriculture. He a Fellow of the Geological Society of America and Soil Science Society of America, and a recent recipient of the Walter Award at the Jackson School of Geosciences, the top award given for research and administration across the School.

Ecohydrology of arid and semiarid landscapes; groundwater recharge in both managed agriculture and natural (arid and semi-arid) systems; influence of soil structure and vegetation on water cycling; design and implementation of monitoring systems for above-ground and near-surface below ground environments.

Hazal Kirimli (Supervisor)
The focus of my research is on quantification of environmental impacts associated with the full life cycle of the global Nickel and battery supply chain. I am passionate about environmental issues, having completed my undergraduate studies from Koç University (Chemical and Biological Engineering) with additional undergraduate experience at Stanford University (International Honors Program) and Vrije Universiteit of Amsterdam (ERASMUS) in...