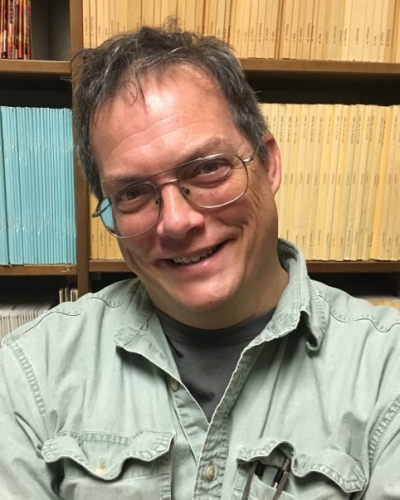 Dr. Bell's research centers on understanding the complex dynamics of vertebrate faunal communities during the Quaternary Period. Chris is interested in investigating patterns of vertebrate evolution, biodiversity and biogeography throughout the Quaternary, and the responses of different vertebrate groups to the various changes in climate that took place during the last two million years. Two major current research areas are: 1) the study of early and middle Pleistocene (Irvingtonian) North American arvicoline rodent biochronology, and 2) the study of anatomy and systematics of extant and fossil turtles and squamate reptiles (lizards, snakes, and amphisbaenians).

Teaching Excellence Award - The College of Natural Sciences, University of Texas at Austin (2000)

William Reyes , Ph.D., expected 2025 (Supervisor)
Generally, I am interested in the macroevolutionary processes that determine how terrestrial vertebrates have responded to periods of climatic fluctuations in earth's history. My research is focused on increasing our understanding of the endocranial morphology, paleoneurology, and paleoecology of Late Triassic pseudosuchians (crocodilian-relatives), particularly that of aetosaurs from North America. Additionally, I'm interested in the origins of the dominant archosaur...

John A Moretti , Ph.D., expected 2024 (Supervisor)
I study changes in vertebrate community composition over the past 3-5 million years in western North America. With a primary focus on the Quaternary, my research occurs at the nexus between vertebrate paleontology, zooarchaeology, and conservation biology. My work involves developing records of biodiversity and biogeography across time in order to examine patterns and processes of faunal change....

Erin M Keenan Early (Co-supervisor)
My research explores the use of geomolecular and biomolecular methodologies to address paleoenvironmental and paleoecological questions. Specifically I am researching the use of proteomics as applied to faunal material as a means of species identification and I am exploring the applications of brGDGTs recovered from various sources to aid in paleotemperature reconstruction. My work is largely restricted to the Quaternary,...

Constraint, homoplasy, and informativeness in the evolution of the medial aperture of the recessus scalae tympani in lizards; Special Symposium 'Recent Advances in Lepidosaurian Evolution and Systematics', 62nd Annual Meeting of the Society of Vertebrate Paleontology, (2002)

Research Triassic vertebrates (Paleontology)
Undergraduates interested in Triassic vertebrates of Texas and the Colorado Plateau!! Get involved with new research including digital segmentation of CT-scanned specimens from Petrified Forest National Park and the University of Texas Vertebrate Paleontology Collections, preparation of vertebrate fossils collected by the WPA in the early 1900s, and photographic documentation of those materials. Opportunities exist for students to develop independent research related to the main questions associated with this project. Projects begin in the Fall, 2022 semester. Interested students should contact Will Reyes (will_reyes@utexas.edu) and Chris Bell (cjbell@jsg.utexas.edu).

Research Phillips Cave fossils (Paleontology)
Dedicated, enthusiastic undergraduate student(s) sought to help work on fossils from Phillips Cave in Crockett County, Texas. Student(s) will help with screen-washing, sorting, identifying, and curating vertebrate fossils from Ice-Age sediments in the cave. Students will learn aspects of the anatomy of the vertebrate skeleton as they contribute to broadening our understanding of vertebrate paleobiogeography on the Edwards Plateau. The project is under way and volunteers can be brought on board immediately. Interested students should contact Stacie Skwarcan (sskwarca@utexas.edu) and Chris Bell (cjbell@jsg.utexas.edu).

Research Inner-Space Cavern fossils (Paleontology)
Dedicated, enthusiastic undergraduate student(s) sought to help work on fossils from Inner Space Cavern in Williamson County, Texas. Student(s) will help with screen-washing, sorting, identifying, and curating vertebrate fossils from Ice-Age sediments in the cave. Students will learn aspects of the anatomy of the vertebrate skeleton as they contribute to studying patterns of vertebrate diversity through time in the context of climate change. Potential opportunities exist for motivated students to pursue independent supervised research related to the main questions associated with this project. Projects begin in the Fall, 2022 semester. Interested students should contact John Moretti (jamoretti@utexas.edu) and Chris Bell (cjbell@jsg.utexas.edu).