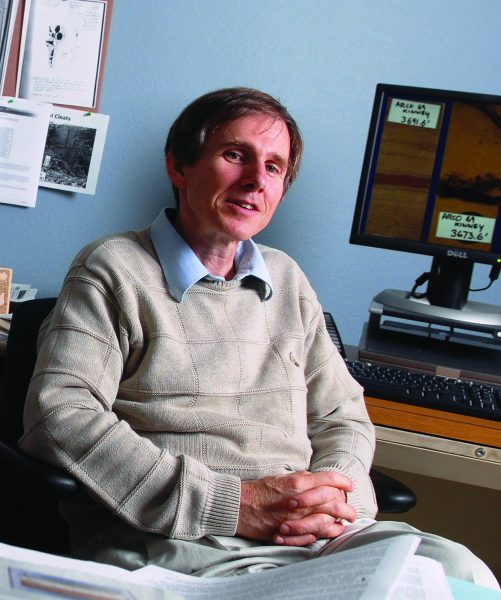 Bill Ambrose built his career at the Bureau of Economic Geology, starting as a graduate research assistant and working his way up to principal investigator of the State of Texas Advanced Resource Recovery group (STARR) before retiring this spring. His work involved collaboration, local and international research projects, and lots and lots of core.

During his long career at the Bureau of Economic Geology, Senior Research Scientist Bill Ambrose started just about every project the same way, with a trip to the bureau’s core repository.

The cavernous repository is filled from floor to ceiling with stacks of narrow, cardboard boxes containing rock cores from Texas and around the world. During his 37 years at the bureau, Ambrose has built up a truly impressive core count.

By the time he retired in March, he calculated that he had examined a total core length of 30,737 feet. Stacked into a single column, the core would tower 1,705 feet over Mount Everest.

“In my opinion, it always starts with the rocks,” said Ambrose, admitting that this axiom was always easy for him to follow. “That has always been personally my favorite thing to do as a geologist, describe core. I could do it all the livelong day.”

Ambrose started at the bureau as a part-time graduate research assistant in 1980, working there while earning a master’s in geology from The University of Texas at Austin. He left for a private company for two years, from 1984 to 1986. But he was back at the bureau for good by the start of 1987.

Ambrose’s research focused on characterizing sedimentary rock formations with energy resources in mind. His early work at the bureau focused on domestic projects. They included finding potential formations for geothermal brine disposal along the Texas coast, determining where pockets of oil may be hiding in old South Texas oil fields, and estimating the extent of coal seams in New Mexico and Wyoming.

Then, in the 1990s, Ambrose went international. He started evaluating the geology of Venezuelan oil reservoirs so companies could make more strategic decisions about where to drill. The work was akin to his South Texas studies, Ambrose said, but with much more oil at stake. Whereas an old Texas well would produce 50 barrels of oil on a good day, a well that produced less than 1,000 barrels per day in Venezuela was considered mediocre.

“Even though the Venezuelan companies were producing oil at prodigious volumes, they were not draining the reservoirs as efficiently as possible,” Ambrose said. “And that’s because the sand bodies that compose the reservoirs are complex.”

Ambrose relied on the core to guide him, and he estimates that about 10,000 feet of his total core count came from Venezuelan rocks.

A decade later, Ambrose was basin hopping along Mexico’s Gulf Coast. He collaborated with PEMEX, the country’s national oil company, starting with the Macuspana Basin hugging the country’s east coast and working his way northward to the Burgos Basin over five years.

But after that, it became all about Texas, with Ambrose joining the STARR group in 2007, under the leadership of Bob Loucks and Ursula Hammes. A year later, Ambrose would be leading the group as its principal investigator.

STARR, or the State of Texas Advanced Resource Recovery group, produces fundamental research about Texas geology that energy companies can leverage in their exploration and production. For Ambrose, his close collaborations with oil and gas companies and experience with careful basin characterization proved to serve STARR well.

Ambrose oversaw a number of regional studies that mapped the geology of multiple counties, and in many cases, contained thousands of oil and gas wells. He said that one of STARR’s biggest success stories was in East Texas, where the group identified areas where existing wells just needed to be drilled a bit deeper — 100 or 200 feet — to access pockets of oil that had never been produced.

But it’s not just the companies that benefit from STARR’s expertise. For every barrel of oil, the state of Texas takes its share in taxes. STARR has proved to be a great return on the state’s investment, with its research helping bring in anywhere from seven to 15 times the amount of money the group received in state funding.

Bureau director Scott Tinker said that Ambrose’s expertise helped define an era of research at STARR and at the bureau as a whole.

“When I think of the STARR program, and the bureau more broadly as the State Geological Survey of Texas, I think of Bill Ambrose,” Tinker said. “He is the ‘type section’ of a state geological survey scientist. He knows rocks, stratigraphy, reservoirs, regional plays, and understands science that matters.”

Ambrose said that STARR is in good hands under the leadership of its new director, Lorena Moscardelli, who, like Ambrose, started her bureau career as a graduate student. But expect to see Ambrose around. He is continuing to contribute to STARR research on a part- time basis and no doubt adding to his core count.