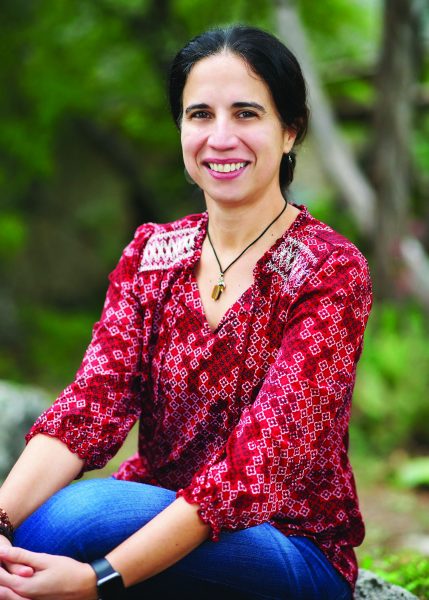 Lorena Moscardelli is applying her experience in both industry and research as the new principal investigator of the State of Texas Advanced Resource Recovery group (STARR) at the Bureau of Economic Geology. Once a research associate in the group, Moscardelli is committed to advancing energy transition research while maintaining close connections between STARR and oil and gas operators.

After eight years away, Lorena Moscardelli is back at the Bureau of Economic Geology. Moscardelli started at the bureau as a research associate at its State of Texas Advanced Resource Recovery group, known as STARR. Now she is leading the group as its principal investigator, filling a space left by William Ambrose, who retired this spring.

“It’s great because it’s both familiar and new,” said Moscardelli, who was previously a principal researcher at Equinor. “There are a wide variety of projects across Texas that cover different basins and geologic formations, a lot of interactions with operators in the state, and we are also kick-starting initiatives linked to the energy transition.”

Ambrose, who still takes part in STARR research on a part-time basis, said that STARR benefits from Moscardelli’s background in industry and bureau research.

“Lorena has already proven to be an exceptional principal investigator,” Ambrose said. “She’s uniquely qualified and uniquely situated with insight into what oil and gas companies consider important in developing oil and gas.”

STARR’s focus is to conduct geoscience and engineering research to increase the production and profitability of earth resources, including oil, natural gas, hydrogen, geothermal and minerals in Texas. Moscardelli started her first stint at STARR as a seismic interpreter in 2007, just after earning a doctoral degree in geological sciences from The University of Texas at Austin.

She grew up in Caracas, Venezuela, and worked in the country’s petroleum industry after college. She decided to come to UT when she was among the thousands of oil and gas workers affected by the Venezuelan political turmoil of the early 2000s.

“I knew that I wanted to further my education,” said Moscardelli, who had met researchers from the bureau, including then-research scientist Lesli Wood, who would go on to supervise her doctoral work. “The Jackson School of Geosciences gave me the opportunity to further my education during a very critical time in my career, and the experience has been truly transformative.”

Moscardelli’s doctoral research focused on deep-water deposits, with emphasis on submarine landslides. Two years into her research associate position, and while also serving as a lecturer teaching subsurface mapping and petroleum geology at the Jackson School, she and Wood cofounded the bureau’s Quantitative Clastics Laboratory (QCL) to concentrate research on clastic depositional systems, with Moscardelli focusing on the deep-water component of the program. Moscardelli’s work at QCL involved collaborating with researchers from Statoil (now Equinor). After she was recruited to the company in 2013, she kept close UT connections, serving as a liaison between Equinor and the Jackson School by following university consortia and overseeing the UT/Equinor fellowship program.

At Equinor, Moscardelli worked in a wide range of regional subsurface characterization projects in the Gulf of Mexico, Nova Scotia and Norway. She conducted most of that work from Equinor’s Austin office but spent 2019-2020 living in Bergen, Norway, where she led overburden management activities in the Tampen-Spur region and updated geological models in the Vøring Basin, while spending her free time mountain hiking around the Bergen region. In late 2020, Moscardelli transferred to the Equinor exploration team in Canada and shortly after decided to return to the bureau as leader of STARR.

“It was too hard to resist,” Moscardelli said.

At the same time as working in industry, Moscardelli remained involved with the submarine landslide research community, serving as the chair of the “Significance of Modern and Ancient Subaqueous Landslides” project also known as S4SLIDE from 2015 to 2020.

Collaboration has always been a fundamental component of Moscardelli’s career and ethos. At STARR, Moscardelli is continuing this by facilitating connections between operators and researchers at the bureau. Moscardelli said working with operators helps inform STARR’s research and define priorities when initiating oil and gas research projects. This close connection also keeps oil and gas operators in the know about energy transition research at STARR and the bureau. Among the many initiatives, STARR is assessing hydrogen storage within salt formations in the Gulf Coast and the Permian Basin and studying the feasibility of in-situ hydrogen generation in depleted reservoirs.

In addition to advancing energy research, Moscardelli said she is also working to foster an inclusive environment at STARR. She said that with an active community of research scientists and industry partners, STARR is a great place for geoscientists from all backgrounds to connect and grow.

“STARR’s biggest asset is its people, and I am committed to create a work environment where they can thrive while making meaningful contributions to both the state of Texas and to science,” she said.