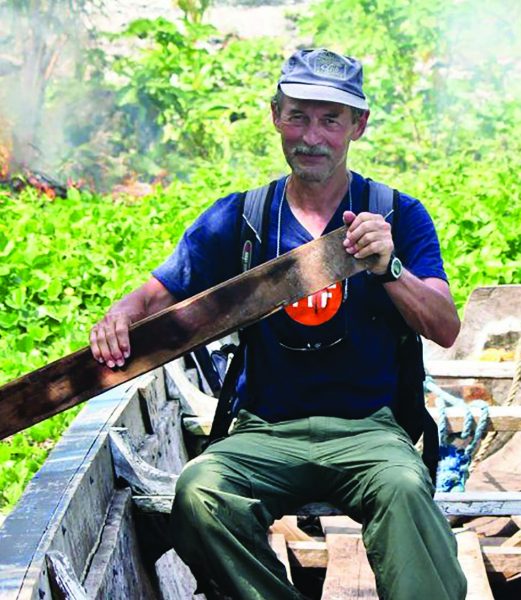 Fred Taylor joined the University of Texas Institute for Geophysics in 1981 with plans to use corals to investigate big questions in geosciences. He made good on that plan, conducting coral research that has unlocked mysteries and earned him a reputation as a pioneering scientist. Now retired and a senior research scientist emeritus, he is continuing to explore and discover.

When Fred Taylor was in the fifth grade, a friend introduced him to rocks. Not the drab marl of North Carolina, but polished rocks and opals from all over. Taylor was smitten, and before long he was hunting for his own among the old wrecks that dotted the fishing and clamming community where he lived.

“I grew up with boats and fooling around in shallow saltwater. The fact I made that into a career is, I think, a logical progression,” Taylor said.

In October 2020, Taylor was appointed Senior Research Scientist Emeritus, the highest honor for a research scientist at The University of Texas at Austin.

Taylor’s career is notable for the part he played bringing corals to the mainstream of geosciences. In his research, he has used corals, both living and fossilized, to measure tectonic deformation, geologic time, the rise and fall of sea level, and climate change. Along the way, he has invented tools and equipment for field research that remain in use today.

Demian Saffer, director of the University of Texas Institute for Geophysics (UTIG) where Taylor has worked for more than 40 years, said his impact on the field is rooted in innovation and good science.

“Fred’s contributions span fundamental science that has impacted a wide swath of the earth sciences,” said Saffer. “He truly embodies the institute’s spirit and mission. We are fortunate to have his continued engagement as an emeritus scientist.”

Taylor’s career with corals began as a grad student at Brown University measuring sea level change in Barbados. He earned a doctoral degree at Cornell University and joined UTIG in 1979 after a college friend and UTIG researcher, Cliff Frohlich, invited him to visit the institute’s then-headquarters in Galveston. UTIG liked Taylor’s proposal to use corals as a tide gauge for measuring tectonic motion, and Taylor liked the freedom the institute offered.

His first assignment took him to the South Pacific archipelago of Vanuatu, where he was the first to use corals to show earthquake deformation and plate motion. Decades later, scientists began using GPS to do the same.

The next breakthrough came by way of corals’ natural atomic clock. When corals absorb naturally occurring uranium, it steadily decays into the element thorium. By comparing thorium isotopes with the remaining uranium, scientists can determine how much time has passed since the coral was alive.

In the mid-1980s, Taylor and Caltech grad student Larry Edwards decided to see how far they could push the technique using a thermal ionization mass spectrometer on 14,000-year-old coral from Barbados. Their findings were so accurate the community used them to calibrate the (then unreliable) technique of radiocarbon dating. Taylor then turned his attention to finding historical changes in the frequency and intensity of the El Niño Southern Oscillation (ENSO), a tropical climate phenomenon with far- reaching effects.

“An ENSO event imposes more climate change on certain parts of the Earth than 2-or-3-degree climate change,” Taylor said. “If it becomes more frequent or significantly stronger in the future, that’s going to be tough for a lot of people.”

Taylor wanted to drill difficult to find corals that grew during the most recent glacial maximum. Undeterred, Taylor used tectonic and sea level modelling to pinpoint where they might be buried. The results took him back to Vanuatu. But the locations were deep and inaccessible by road, so he engineered a drilling rig that could be broken down and carried by hand. On its first outing, the drill recovered lengths of coral that were 16,000 years old and suitable for climate reconstructions, already two millennia older than any useful ones previously found.

“With information like that, you can reconstruct ENSO back to when the global climate regime was totally different and match it with climate models that predict what it does in the future,” he said.

The portable drill was just the latest of Taylor’s innovations. In the early 2000s he designed an underwater coral coring drill that was safe to use in marine parks because it operated with pressurized seawater instead of hydraulic oil. In the 1990s he helped design a single-point GPS mast that has since been adopted by UNAVCO, a geodesy nonprofit that supports geosciences research around the world.

As emeritus scientist, Taylor isn’t ready to hang up his hat quite yet. He’s made improvements to the portable coral coring drill’s design and currently is helping colleague Jud Partin get it ready for an NSF-funded mission to reach 20,000-year-old cores.