Jackson School of Geosciences graduate students were among the top student presenters at the 2020 annual fall meeting of the American Geophysical Union (AGU).

The meeting took place in December 2020, but award winners are now in the process of being notified.

As of March 2, the following students have received an Outstanding Presentation Award (OSPA) from the AGU:

The purpose of the OSPA awards is to “promote, recognize, and reward undergraduate, master’s, and Ph.D. students for quality research in Earth and space science and the ability to effectively communicate it.”

OSPAs are awarded to the top presenters in each of the AGU’s student presentation sections (poster, oral and eLightning) who opt into having their presentations considered by OSPA judges.

Each year, about 2 to 5 percent of each section’s presenters receive an OSPA.

Congratulations to our 2020 winners!

Note:  Please contact the Jackson School’s Office of Communications with additional OSPA awardees who should be added to the list. 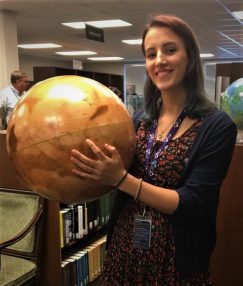 Bamber won an OSPA for her poster presentation on how paleolakes on Mars once filled – and overflowed from – craters.

“I was pretty surprised to have won,” Bamber said. “It was a nice way to end the year and a nice pick-me-up to have positive news.”

2020 was Bamber’s first time attending an AGU annual meeting, although the meeting’s virtual format meant a new experience for everyone. Bamber said that she enjoyed how the virtual setting enabled more interactive posters. Bamber’s own poster includes a slideshow of Martian paleolakes and a recording of her presenting key research takeaways in about two-and-a-half minutes.

Bamber said that an effective research presentation clearly defines the research question and its broader impacts.

“Really pound home why your work is important and how it links to the broader picture, and what’s going on in your sub-field,” she said. 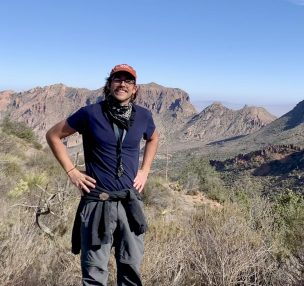 Conrad won an OSPA award for his poster presentation on data from stick-slip experiments aimed at studying materials that can stand in as Earth analogs in laboratory experiments.

“When I learned I won the award I reacted with a combination of disbelief and excitement. I applied for the contest from a hotel room when I was doing fieldwork in California. It really felt like a long shot,” Conrad said. “Overall, I feel encouraged and motivated after winning the award.”

Conrad said that the analog materials are being used in a model that simulates coupled tectonic and geomorphic processes. The research analyzed the material’s deformational behavior with varying parameters, such as varying water content, normal load, and shear loading rate. 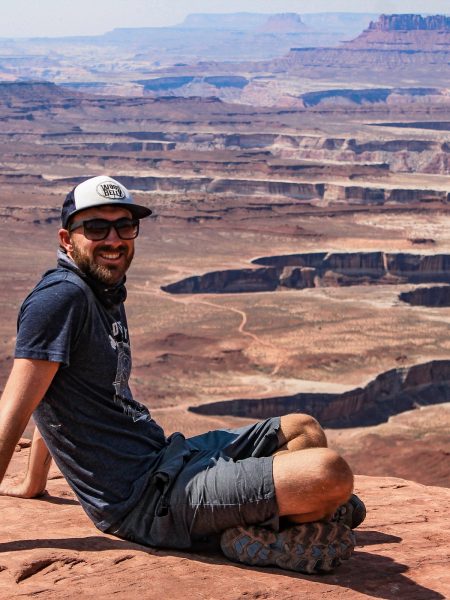 Recorded Talk: Advances in plate tectonics: interdisciplinary approaches to understanding the separation of continents and initiation of subduction zones at GeoPRISMS primary sites.

Shuck won an OSPA award for a talk that highlighted themes from his Ph.D. research. The talk synthesized common geologic elements from subduction zones and continental rifts to illustrate a holistic view of Earth’s plate tectonic cycle.

“It definitely felt great,” Shuck said about winning the award. “I took somewhat of a gamble in that I presented on a synthesis of two separate topics and research areas that are typically considered very different. It was difficult to communicate this connection, but in the end it paid off.”

The OSPA award includes feedback from a panel of presentation evaluators. One evaluator summed up Shuck’s talk with the follow comment: “This was a very good, well-prepared talk, presenting exciting results in proper context. Great science wrapped up in great presentation skills.”