Who were the team members who conducted this study?

Who funded the study?

What is the Bureau of Economic Geology?

What are the previous major studies and assessments of natural gas in the Barnett Shale?

What is distinct about this study?

What are the forecasts of the study for production of natural gas from the Barnett Shale?

Where did the production data on the wells come from? Can others obtain it?

When will assessments be available on other major U.S. shale formations?

How many years of supply of natural gas is there in the Barnett Shale?

Has this study been peer-reviewed?

Why can’t I see the study?

Figures Accompanying the Release and FAQ 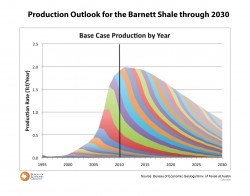 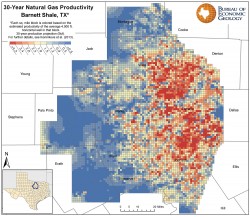 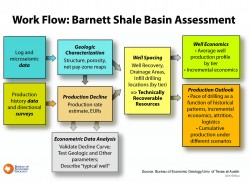 Who were the team members who conducted this study?

Who funded the study?

The Alfred P. Sloan Foundation. The Sloan Foundation is a philanthropic, not-for-profit grantmaking institution based in New York City. Established in 1934 by Alfred Pritchard Sloan Jr., then-President and Chief Executive Officer of the General Motors Corporation, the foundation makes grants in support of original research and education in science, technology, engineering, mathematics and economic performance. For more information, see About the Sloan Foundation.

What is the Bureau of Economic Geology?

The Bureau not only curates the largest volume of subsurface core and cuttings in the United States at three world-class centers located in Houston, Austin, and Midland, but also runs a major Texas well log library, with nearly one million well records on file. The Bureau serves as the managing organization for the Advanced Energy Consortium, a major subsurface nanotechnology research organization. Centers include the Gulf Coast Carbon Center and Center for Energy Economics. Bureau reports, maps, and other publications are available online.

What are the previous major studies and assessments of natural gas in the Barnett Shale?

The U.S. Energy Information Agency (EIA) included an estimate of technically recoverable resources in the Barnett in their 2011 “Review of Emerging Resources: U.S. Shale Gas and Shale Oil Plays.”

Other recent studies, mainly consensus views and literature surveys have been conducted by the National Petroleum Council and the Potential Gas Committee.

In 2003, the U.S. Geological Survey published an assessment (updating an earlier assessment from the late 1990s), but this was done before the advent of horizontal drilling had transformed shale gas exploration, and the reserves number has long since been recognized as well below the now estimated ultimate recovery (EUR) for the formation.

What is distinct about this study?

The BEG assessment is an integrated study of the Barnett shale formation, bringing together the best related research in engineering (reservoir engineering, production engineering), geoscience, and economics. Previous assessments of the Barnett and other major shale plays have taken a top-down approach, using averages to estimate the size of the recoverable resource. In contrast, the BEG assessment takes a bottom-up approach, starting with actual production data from each individual well in the formation.

What are the forecasts of the study for production of natural gas from the Barnett Shale?

At a base price of $4 gas, the Barnett will produce approximately 44 trillion cubic feet (TCF) of natural gas through 2050 based on already drilled wells and the wells that will be drilled through 2030.

In the base case, from a current high of 2 TCF per year, production will plateau and slowly decline to about 900 BCF a year by 2030.

The forecast stops addition of new wells by 2030, with wells started by 2030 continuing to produce through 2050 under the well attrition, economic recovery limits, and decline parameters imposed by the model.

Where did the production data on the wells come from? Can others obtain it?

When will assessments be available on other major U.S. shale formations?

By the end of 2013, the BEG will complete assessments, following the same methodology, of three other major U.S. shale gas basins: the Marcellus, Haynesville and Fayetteville.

How many years of supply of natural gas is there in the Barnett Shale?

While it is common for analysts to report that a formation or county has a certain number of years of natural gas reserves based on current rates of consumption, presenting information in this manner can be misleading because of shifts underway in national energy use. In 2004, for example, the U.S. produced half of its electricity from coal and only about 20 percent from natural gas, whereas in 2012, the resources each accounted for about 35 percent of U.S. electricity generation. For this reason it can be more useful to simply state the production forecasts in trillion cubic feet (TCF).

In 2011, the U.S. consumed about 24.4 TCF of natural gas, according to the U.S. Energy Information Administration and Barnett production supplied nearly 10% of that consumption.

The word “reserves” refers to the amount of a mineral resource that is technically and economically recoverable within a certain area. In an oil or gas formation, the resource base is almost always considerably larger than the recoverable reserves, because in some parts of the formation, it is simply too expensive or technically difficult to extract the resource. When resource prices are high, operators can afford to spend more and take greater technological risks seeking the harder-to-extract parts of the resource base. When prices are low, it does not pay to pursue expensive parts of the formation, and this fact lowers the overall reserves estimate.

Technology also plays a significant role in understanding reserves. Before the advent of hydraulic fracturing, for example, the U.S. was known to have a large resource base of shale gas, but the country did not have economically recoverable reserves. Today, hydraulic fracturing has substantially reduced the cost of obtaining shale gas resources, contributing to much higher natural gas reserves estimates for the U.S. and world. The resource (shale gas) did not change, but the drilling and extraction technology and our understanding of the geology did.

Has this study been peer-reviewed?

Five research papers based on research from the assessment are in review in peer reviewed journals.

Before submitting the papers, the BEG team submitted their research to several other forms of peer review, as part of the research process. The BEG team invited an independent review panel with members from government, industry and academia to critique their research. At an open day for academic, government, NGO representatives and industry scientists, 100 attendees were invited to offer additional feedback. Scientists from two of the largest producers in the Barnett, Devon Energy and ExxonMobil, offered feedback on the methodology during two in-house corporate review days. Finally, the BEG hired a consulting company to critique the draft manuscripts and offer suggestions for their improvement of the study.

Why can’t I see the study?

To answer this question—and see updates on the study as they become public—please visit the Bureau of Economic Geology website for the study at: