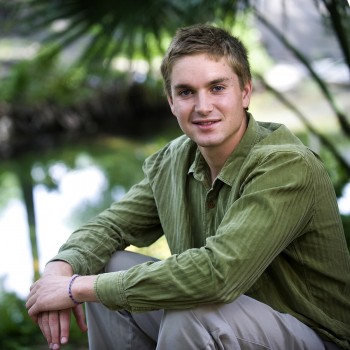 Andrew Smith studies undersea gas vents, large volcano-like features on the seafloor that spew plumes of oil and gas into the ocean. Scientists have long been interested in them because many contain large amounts of gas hydrate, an icy substance made of natural gas and water. Gas hydrates might be mined someday as an alternative energy source, though some experts warn of their potential to cause submarine landslides and maybe even accelerate global warming.

As a master’s degree candidate at The University of Texas at Austin’s Jackson School of Geosciences, Smith focused on a vent in the Gulf of Mexico 130 miles (210 kilometers) from the coast and 3500 feet (1 kilometer) below sea level. In a paper submitted to the journal Nature Geoscience, he and his colleagues estimate that about a fourth as much oil and gas naturally seeps from the floor of the Gulf each year as was released by the entire 2010 Deepwater Horizon oil spill. That’s about 100 times larger than previous estimates of natural background seepage. Many experts now believe these natural seeps helped dramatically blunt the effects of the oil spill by supporting a community of hydrocarbon-degrading bacteria ready to quickly break down the oil.

“This paper is significant because it estimates the natural hydrocarbon flux in a way that no one has done before,” says Peter Flemings, Smith’s graduate advisor and co-author. “This technique can be applied to other places such as the Arctic where people are especially concerned that these vents could act as a feedback to global warming.”

The model that Smith and his colleagues developed uses temperature and salinity measurements taken at a range of depths within the vent by other researchers. Taken separately, the way the temperature and salinity change as you move up through the vent provide two different estimates of the amount of fluid flow from the vent. Taking advantage of the fact that both hydrocarbons and water carry heat but only water carries salt, the scientists can estimate what portion of the flow is made up of hydrocarbons. The team multiplied that flow by the hundreds of known gas vents in the Gulf to get a rough estimate of total seepage in the Gulf.

Now Smith, who completed his master’s degree in May 2012, is in Norway on a year-long Fulbright Student Award to study undersea gas vents in the Arctic and to serve as a kind of scientific and cultural ambassador. The Fulbright program is extremely competitive. Only about 1 in 5 applicants are accepted.

He will work with scientists at the University of Tromsø to map submarine vent systems, document past and present fluid leakage, and use computer modeling to better understand the process of venting.

In the Gulf of Mexico, Smith’s interest and that of many other scientists concerns how these vents relate to economically valuable hydrocarbon deposits far below the seafloor and their ability to unleash submarine landslides.

In Norway, there are additional motivations to the work. As the temperature of the global oceans continues to rise, scientists are concerned that gas hydrates in Arctic gas vents could become unstable and release large amounts of methane into the ocean and possibly the atmosphere, where it would act as a potent greenhouse gas and accelerate global warming. The Arctic is considered more vulnerable because global temperatures are rising faster there than in temperate or tropical locations.

Smith will try to find time for a little fun in Norway. He’s looking forward to immersing himself in Norwegian culture, seeing the northern lights during the roughly two months of complete darkness, and running the Midnight Sun Marathon.

Smith, who says all he thinks about these days is deep water gas vents, hardly knew what they were before he came to the Jackson School. He hadn’t even taken a marine science class. But then he encountered Flemings’ infectious enthusiasm.

“And I knew it was exactly what I wanted to do,” he says. “Not just work on that specific project and try to solve that particular problem, but I knew I wanted to work with Peter and we’d work well together and he was going to put me on a good project and give me all the support I needed.”

He says it was also a very practical choice. The research would give him experience working with industry seismic data, which would allow him to go work in the energy industry if he wanted to. It’s also a topic of great interest in the academic community, so he could instead go in that direction.

Smith said one of his top two reasons for choosing the Jackson School was the Jackson Fellowship, which gave him full funding for his master’s, without the need to work as a teaching assistant or research assistant. The other was the wide range of advisors and research areas he could choose from.

“Because it’s the largest geoscience program in the country, I could come and choose from hundreds of different advisors,” says Smith. “And because of the depth and breadth of the program, I could study literally anything I wanted in the geosciences.”