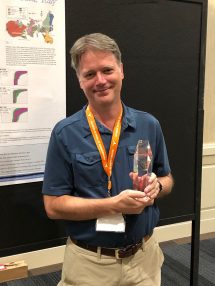 Professor Richard Ketcham was selected as the 2020 recipient of the Martin Dodson Prize, the highest honor bestowed by the International Standing Committee on Thermochronology.

Due to the COVID-19 pandemic ,the prize was not publicly announced until 2021. Ketcham received the award at the committee’s biannual meeting in Santa Fe in September 2021.

“This is a community where everybody knows everybody, knows what they do, and what they contributed, so it’s personal,” Ketcham said. “It’s very nice to get this affirmation from the committee and the community.”

Ketcham is a joint recipient of the award. He shares it with Kerry Gallagher, a professor at
the University of Rennes.

Thermochronology is the study of getting information on rocks’ thermal histories, or the temperatures they have experienced through geologic time. According to the committee, Ketcham and Gallagher were selected for the prize “in recognition of their long term, extraordinary contributions to make mathematically robust, yet user-friendly thermal history modeling tools available to the thermochronology community.”

Ketcham has done extensive research on the theory of how thermochronometric systems work and is best known for developing a thermal history modeling program called “HeFTy”.

The program name references the Helium and Fission-Track thermochronometric methods while also serving as a reminder of the first rule of computer modeling: garbage in, garbage out.

“Naming the software after a trash bag really drives home a message that I want all of HeFTy’s users to keep in mind,” Ketcham said.

Jackson School of Geosciences Professor and Department of Geological Sciences Chair Daniel Stockli, who is also a thermochronologist, said that Ketcham’s contributions to thermochronology science have helped significantly advance the field.

“This is a well-deserved award and recognition by the international thermochronology community for both his groundbreaking work in fission track annealing studies as well as thermal inverse modeling,” Stockli said. “His modeling software packages are widely used and recognizable, have revolutionized thermal modeling, and represent the state of the art.”

The award is named in honor of the late Martin Dodson, who pioneered the method of quantitative thermochronology.