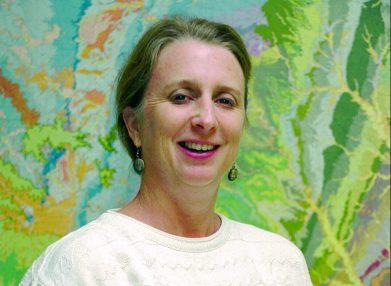 Susan Hovorka, a senior research scientist at The University of Texas at Austin, has won the Greenman Award for her significant contributions to the development of greenhouse gas control technologies.

“I am honored to receive this award in recognition of my team’s work,” Hovorka said. “Joining the ranks of the prestigio

us individuals who have won this in the past illustrates the overall success of our work in greenhouse gas mitigation.”

“Hovorka’s work in carbon dioxide storage has advanced the field of carbon capture and storage (CCS) immeasurably,” said Thambimuthu. “Most priceless of all, she has been a mentor and inspiration to the CCS students she’s advised, and an internationally-influential leader to many technical research teams.”

Only 12 people have received the Greenman Award since its inception in 1996, including this year’s winners.

An ancient symbol found in many cultures throughout the world, the Greenman represents the union of humans and the natural world. The award’s webpage states that the symbol represents a step towards reversing some of the harm done to the environment.

Hovorka and her team at the Gulf Coast Carbon Center (GCCC) have worked on CCS since 1998 and identified potential sites for storage around the U.S. and abroad and monitor storage at seven major field projects, including major commercial sites such as the Air Products facility in Port Arthur, Texas, and the Petra Nova project outside of Houston.

“Sue has shown great leadership in progressing the science and application of carbon dioxide storage technologies, bringing together both research and industry interests,” said Tim Dixon, an IEA program manager who helped coordinate the conference.

Hovorka is the principal investigator and founder of the GCCC within the Bureau of Economic Geology at The University of Texas at Austin Jackson School of Geosciences. The research team focuses on geologic storage, an essential component of CCS. Once carbon dioxide is captured at the source of industrial emissions, the carbon dioxide is transported to sites selected by the team and stored deep below the surface of the Earth in porous rock.

Hovorka has led field and laboratory studies of many aspects of the process, including estimating underground storage capacity, optimizing enhanced oil recovery to both store greenhouse gases and recover cost, and assessing geosystem response to injection. The most recent ongoing project, the Gulf of Mexico Partnership for Offshore Carbon Storage, is one of the first efforts in the U.S. to assess the geologic layers below the seafloor for storage.

The GCCC has developed innovative monitoring plans for two of the three largest U.S. storage sites and conducted studies to ensure that the captured carbon will remain permanently stored. In the past four years, plants have captured more than 4.5 million metric tons of carbon dioxide that would have otherwise been released. Monitoring and risk assessment studies conducted by the center have helped demonstrate the method’s efficacy as a safe, long-term solution to reducing greenhouse emissions.

“I couldn’t think of a more deserving person to win what’s considered the ‘Nobel Prize’ of CCS,” said Katherine Romanak, a GCCC researcher who works with Hovorka. “Not only has she been a pioneer in CCS by running the first pilot project in the U.S. with the Frio project, but she continues to push research forward with the highest degree of innovation and collaboration. We are so proud to work with her in the Gulf Coast Carbon Center.”

CCS is one mitigation technology featured this month in the Intergovernmental Panel on Climate Change’s (IPCC) “Special Report on Global Warming of 1.5°C.” Hovorka and the GCCC are part of only a few dozen research teams in the U.S. that work in CCS. Hovorka said that she and the rest of the GCCC team hope the work contributes to the technology becoming marketable, commercialized, and deployed in the near future to meet the IPCC’s recommended global emissions reduction.