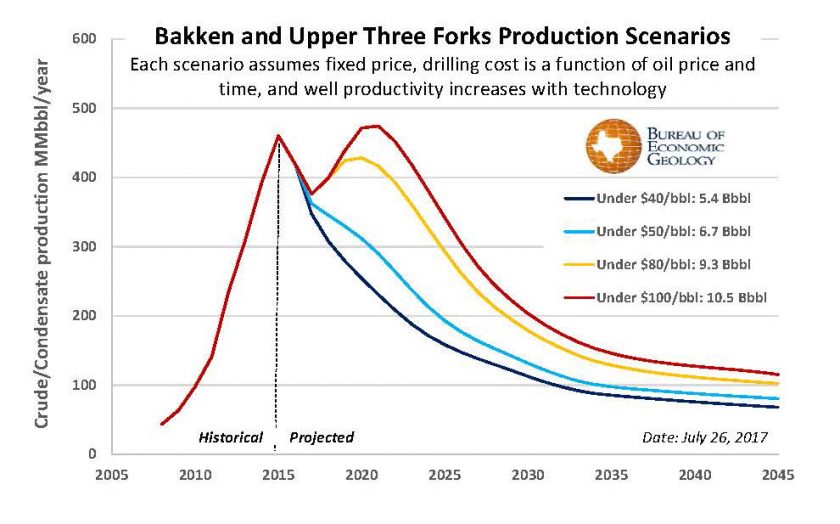 AUSTIN, Texas — The Bureau of Economic Geology has concluded a comprehensive study of the Bakken unconventional resource in North Dakota and Montana and found that it will remain a substantial contributor to U.S. oil production for several decades through a range of projected oil prices.

The study forecasts a wide variation of production outlooks from the Bakken and the deeper Three Forks formations depending primarily on potential future oil prices and other factors. The study does not predict oil prices but looks at scenarios reflecting the economics of the resource development.

For instance, according to the study, future West Texas Intermediate (WTI) oil prices remaining near $40 per barrel would likely lead to declining production from the Bakken and Three Forks formations, resulting in about 14,000 future drilled wells and estimated ultimate recovery of about 5.4 billion barrels of oil. However, if WTI oil prices were to recover to $100 per barrel, it could lead to 60,000 wells added, capturing 10.5 billion barrels of oil, with production increasing to 1.5 million barrels per day. In all projected scenarios, the Bakken and Three Forks formations are projected to have a significant impact on American oil production for many years to come.

“Prices will vary, costs will follow, and operators will adapt by changing their completion strategies. So we can’t simply forecast the future,” said Scott W. Tinker, director of the Bureau of Economic Geology. “What we can do, however, is run scenarios with respect to economic and technical assumptions, representing the range of uncertainties in future production. We designed a model that feeds in the geologic, engineering and economic field data, assumptions, and descriptions to explain how future play development could unfold‎ under various circumstances.”

The Bureau is a unit of The University of Texas at Austin Jackson School of Geosciences.

The study was funded by the nonprofit Alfred P. Sloan Foundation. The initial results were presented in a series of presentations at the Unconventional Resource Technology Conference (URTeC) in Austin on July 25. Final results will be published in industry journals in the coming months. Significant results of the analysis that will be published in the future include:

The study was conducted by a multi-disciplinary team of geologists, petrophysicists, engineers, economists and statisticians. The team performed a ground-up geological assessment of the Bakken and associated Three Forks formations, and developed detailed geologic maps, assessments of the hydrocarbons in place, and estimates of recoverable resources across a wide range of economic scenarios. It is part of a series of studies conducted by the Bureau on the country’s major shale plays that is widely considered to be the most comprehensive public study of its kind.

“The Sloan Foundation’s support of this research is vitally important for everybody who is interested in the country’s energy security,” Tinker said. “And that’s all of us, from the major producers in North Dakota and Texas to the major consumers in California and New York, and everybody in between.”‎

For more information, contact Mark Blount at the Bureau of Economic Geology at 512-471-1509 or mark.blount@beg.utexas.edu.