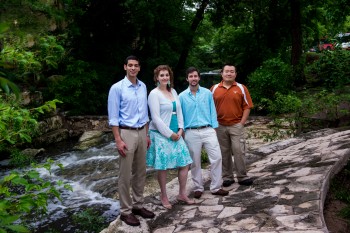 Private companies and government organizations face a growing need for professionals in the energy and resources sectors that can plan, evaluate, and manage complex projects that are often international in scope and include partners with interdisciplinary professional backgrounds.

The Jackson School of Geosciences Energy & Earth Resources Graduate Program (EER) is meeting this need by preparing students for careers in these diverse industries. The program offers classes that touch on all facets of the energy and resources sectors, including geosciences, engineering, management, finance, economics, law and policy.

Dual-degree offerings in public affairs, global policy studies and business administration allow students to specialize within the program. The result is a program that attracts curious people with a wide array of work backgrounds and career goals. We are pleased to introduce you to a few of them.

Allison Pace is all of the above. And through the EER program, she was able to be all three while learning the skills and knowledge needed to pursue a career as an exploration geologist.

Between taking classes in geology, engineering and law, writing her thesis on sediment transport and canyon preserva­tion, and teaching assistant responsibili­ties, she’s learned that geology is much more than the study of the Earth.

Consideration of geopolitical concerns, a company’s particular business goals, and available technical prowess make it so that “a rock is never just a rock,” Pace said.

She earned her master’s degree from the program in the summer of 2015 and has since moved to Midland to stake out a job in the oil and gas industry.

Before enrolling in EER, Pace earned her bachelor’s in geosciences and then her master’s in teaching with a focus on science education from The University of Texas at Dallas and held various teaching positions. After moving to Austin, she was able to continue to apply her experi­ence as an educator by teaching 5th grade science once a week in two Round Rock elementary schools. Pace has been teaching at the schools as part of the Scientist in Residence Program, a joint Jackson School-College of Natural Sciences initiative in the Environmental Science Institute that pairs graduate students in science with K-12 teachers in the classroom.

“It keeps me excited about my research because one of the major aspects is you share your research with the students,” Pace said. “It’s been fantastic. A lot of work, but really rewarding.”

Pace’s lessons often show how major concepts in science are applied within exploration geology. But in one instance, Pace turned a lesson on calculating area and perimeter into an applied exercise in quilting — a passion of hers. Her students did the math and Pace the sewing of a science-themed quilt for each school. The handiwork now hangs in their classrooms.

“I wanted to show them that a concept is just an idea until you can use it in a meaningful way to actually accomplish something,” Pace said.

Before enrolling in the EER program Stevenson Bunn worked for the National Council for Science and the Environment, an environmental policy firm in Washington.

The work provided a unique combi­nation of environmental and business-related challenges. However, the experience made him realize his true passion was geology — the subject Bunn earned his bachelor’s degree in after being first captivated by the topic in an undergraduate course at Washington and Lee University in Virginia.

Bunn selected the EER program specifically to improve upon his geologic background and understanding while continuing to build on his previous work experience.

“It was a program where I could base my experience on geology while supplementing my degree with interde­partmental classes in the kind of environ­mental and business aspects I was able to handle in D.C.,” Bunn said.

Bunn turned back to geology through his research, a requirement of the EER program, with program Director William Fisher introducing him to Lesli Wood at the Bureau of Economic Geology. There he focused his research on using Petrel software to model depositional processes and the impact of architectural elements in tidally influenced systems, specifically looking at the Sego Sandstone in the Book Cliffs of Utah.

The work became the topic of his thesis and the topic of a poster presentation he gave in the summer of 2015 at the annual member meeting of the American Association of Petroleum Geologists, the premier international group for petroleum geologists with over 40,000 members in 129 countries.

Bunn says Fisher’s mentorship in classes, career path and research was a major highlight of his EER experience.

“I think that working with Dr. Fisher was one of the best experiences I had in the EER program,” he said. “He took several of us who were interested in petroleum geology under his wing.”

Bunn earned his master’s in EER in spring 2015. He now lives in Houston and works as an exploration geoscientist for the Apache Corporation, a company he interned with while in the program.

The decision to tap an oil and gas reser­voir begins with insight from geologists and geophysicists about its estimated output. But a successful business won’t even consider drilling unless the project makes economic sense.

Kyle Gabb is equally comfortable talking oil and gas from both perspectives.

As a dual EER and MBA student in The University of Texas at Austin McCombs School of Business with a focus on energy finance, Gabb is learning to approach drilling decisions using scientific metrics while simul­taneously considering the financial impacts.

“A discipline like finance is generally not specialized, so energy companies are very interested in understanding what it is that excites you about working in the industry,” Gabb said. “Being able to discuss my previous energy-related work experience and the technical background that I have developed from the Energy and Earth Resources master’s degree effectively demonstrates my passion for the industry.”

Before enrolling at the university, Gabb earned his bachelor’s in Earth and ocean sciences from Duke University and worked as a landman for Oklahoma City-based Chesapeake Energy. He gained a first-hand appreciation for the intercon­nectivity of business, legal, geologic and engineering decisions, and their impor­tance to the development of successful assets. He decided to enroll in the EER program in 2013 and a year later in the McCombs School of Business to better understand the science-business nexus.

Gabb’s science and finance experience has made him an asset in prestigious industry-sponsored university competi­tions that challenge teams of students to solve real-world inspired problems faced by major oil and gas companies.

He was selected to be on both the Jackson School’s and the McCombs School’s teams for their respective energy competitions. At the Jackson School, the team competed in the 2014 Imperial Barrel Award competition, which presents teams with geological datasets and chooses a winner based on their exploration recommendations. At McCombs, it was the 2014 National Energy Finance Challenge, which pres­ents the teams with a scenario of financial and operational issues and selects a winning team based on the strategic plan it develops. Gabb’s team took first place in the National Energy Finance Challenge, winning the $10,000 prize and lighting the university tower orange in recognition of the achievement.

Gabb will be interning in the finance department at Chevron’s corporate headquarters in San Ramon, California, over the summer of 2015. In the fall he will return to the Forty Acres to complete his final year of the dual-degree program.

Xinggang “Chris” Liu entered into EER a well-trained and well-travelled engineer and researcher.

After earning both his bachelor’s and master’s in petroleum engineering he worked as a reservoir engineer in China and Texas and a petroleum researcher in New Mexico.

What brought him to EER was the desire to understand the oil and gas industry on a more holistic level.

But the program brought more than a broadened perspective; it put him on track for a new career path. After receiving his master’s from EER in the summer of 2015, Liu plans to earn a law degree from the university with a focus on mineral rights and carbonate reservoir characterization. His ultimate goal is to be a professor with expertise in law as it relates to geology and the oil and gas business.

His interest in geology’s legal ques­tions stem from his EER classes in policy, law and economics. Liu said the classes helped him realize that a financially successful reservoir is not built on science and engineering alone.

“The benefits of technological advance­ments could not be maximized, or even might be trivialized, if the potential capacity and political risk of a reservoir are poorly investigated,” Liu said.

The mentorship Liu received throughout the program, particularly from EER Director William Fisher, is what inspired him to pursue a career as a professor.

“So many opportunities I had were from him,” Liu said, crediting Fisher’s guidance and support to introducing him to people and positions, such as a teaching assistant job, that helped grow his knowledge in geology and confidence at the same time.

“It was Dr. Fisher’s mentorship and teaching that made me a more inde­pendent thinker, strategic debater and, most importantly, a more compassionate person,” Liu said, adding that he hopes one day to provide the same sort of support to students as a professor.

“My determination in pursuing a doctoral degree was not only driven by my strong interest in geology but also influenced by Dr. Fisher’s mentorship,” Liu said. “He gave me inspiration to pay it forward by getting a Ph.D. and having the opportunity to mentor other students.”