Measuring Volatiles in a Core 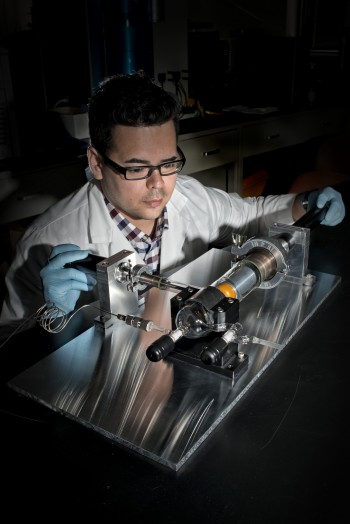 Daniel Enriquez, a research scientist associate at the Bureau of Economic Geology and gas geochemistry laboratory technician, invented a device to solve a long-standing problem of core analysis.

The study of in situ fluid compositions under shale reservoir conditions is problem­atic because volatiles can be easily lost during core drilling and post-core transport. To retain volatiles contained in the sample cores, dips and coatings such as waxes and plas­tics are used when cores will not be tested within a few hours or days, and when the material will be transported over long distances or requires added mechanical integrity.

Accessing and accurately measuring the volatiles within the cores has been difficult. Enriquez’s invention solves the capture and measurement problem by using a cutting blade inside a vacuum chamber to efficiently pierce the core plug’s thick coating and capture gasses for analysis. The instrument was created in collabo­ration with The University of Texas at Austin’s Applied Research Laboratories and the chemistry department. Enriquez is a graduate student at the Jackson School of Geosciences and an alumnus of the school’s GeoFORCE program, where he was instructed by bureau researchers Jeffrey Paine, Sigrid Clift and others. The program left a lasting impression on him, strongly influencing his deci­sion to pursue his studies in geology and a career at the bureau.