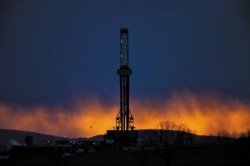 Production of natural gas in the United States is climbing rapidly, and the US Energy Information Administration (EIA) predicts long-term growth. But studies by the University of Texas (UT) challenge that forecast.

The Texas team made forecasts for the four most productive shale-gas formations, or plays. Those forecasts suggest that gas production will peak soon and quickly drop, a much more pessimistic outlook than those offered by the EIA and several companies, such as Goldman Sachs.

Featuring: Scott Tinker, director of the Bureau of Economic Geology, the State Geologist of Texas, a professor in the Jackson School of Geosciences and director of the Advanced Energy Consortium