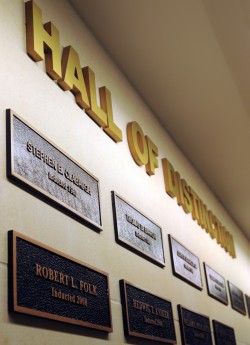 This spring, the Jackson School proudly inducts three legends into its Hall of Distinction. They were selected for their high-level accomplishments in academia, industry or government, as well as a strong affiliation with the Jackson School.

Art Maxwell, a leader in deep sea drilling and marine geophysics, served from 1982 to 1994 as the first director of the Institute for Geophysics. His efforts during his 12-year tenure as director helped develop the Institute into one of the leading geology and geophysical research institutions in the world. He co-led an expedition in 1968 with the Deep Sea Drilling Project that collected some of the first direct geologic evidence in support of sea floor spreading and plate tectonics. He served in key positions at critical times during the “institutionalization” of oceanography in the U.S. He is currently living in Santa Fe, New Mexico.

Elias Sellards served the university as director of the Bureau of Economic Geology (1932-1945) and director of the Texas Memorial Museum (1938-1957). He also served for many years as a professor of geology and a staff geologist for the Bureau. Early in his career, he settled a dispute between Oklahoma and Texas over the state boundary along the Red River. He wrote a two-volume compendium on the stratigraphy and structure of Texas, with accompanying geologic and structural maps of the state, and a book on “Early Man in America.” During the Great Depression, he directed a paleontological survey which assembled an outstanding collection of Pleistocene fossil remains. Read more about Dr. Sellards in Faculty Through Time.

James Lee Wilson, internationally recognized expert on the geology of carbonate rocks, was an associate professor at the University of Texas at Austin (his alma mater) from 1949 to 1952. He served on the Geology Foundation Advisory Council from 1964 to 1967. He worked as a research geologist for the Shell Development Company in Houston, the Netherlands, and the Middle East. Later, he was a professor at Rice University, where he was also chairman of the Geology Department, and at the University of Michigan-Ann Arbor. His 1975 book “Carbonate Facies in Geologic History” is still a standard text on stratigraphy of carbonate rocks. Among his many awards, he received the prestigious Sidney Powers Award from the American Association of Petroleum Geologists.

On March 29, 2012 we welcomed these three new members to the Hall of Distinction. See photos of the induction ceremony