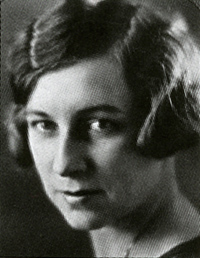 MA University of Texas at Austin, 1917

Joined Johan Udden at the BEG in 1920 after completion of her MA on Cretaceous bivalves under Francis L. Whitney.

Later involved with Joshua Beede in the study of Permian aged fusulinids and their stratigraphic significance.

Ran a flourishing consultancy at a time when female success in business was limited. She advertised her company by initials alone.

Spent about twenty years in Patagonia developing an oilfield for Gulf Oil, gaining international recognition for her work.

Some of her specimens are contained in the NPL’s Type Collection.

Her estate financed the carillon in the Main building on the UT Austin campus.

“The carillon in the tower of the main building consists of fifty-six bells…..The original seventeen bells were installed upon completion of the building in 1936, the centennial of the state of Texas. The remaining thirty-nine bells are the generous bequest of Hedwig T. Kniker….cast in 1986.”