Roemer's map of Texas, 1855. The first geologic map of Texas was made by Ferdinand Roemer and published in Bonn, Germany in 1849. Map image courtesy of Barry Lawrence Ruderman Antique Maps.

The term ‘geologist’ is used here in a broad sense. Our collections derive from the research of paleontologists, stratigraphers, hard and soft rock geologists and in some cases avocational collectors.

These early explorers were of vital importance in the development of the state of Texas, discovering raw materials that had vast economic consequences. They helped to unravel the geologic history of the state. 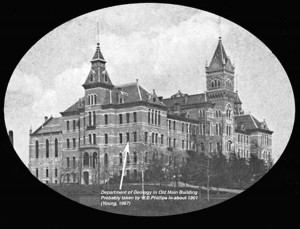 The first home of the collections in about 1900 was the third floor (arrowed) of the Old Main Building. Image probably taken by W. B. Philips, courtesy Young, 1967.

Robert T. Hill became the first chair of the new school of Geology. The first home of this school and its collections in about 1900 was the third floor of the Old Main Building. The building was demolished in the 1930s. The collections then moved into the Will C. Hogg Building, built in 1932 to house the Department of Geological Sciences. The geological frescoes still mark the original purpose of this building.

The early days of geologic mapping of the state were also days of great specimen collection. Many researchers were responsible for these collections and there is space here to mention only a few of them. 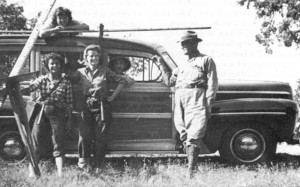 Franics L. Whitney and his students in the field in the summer of 1943.

In the early 20th century, when most of these featured women were working, professional female geologists were quite rare. They were assigned to work on microfossils perhaps because these type fossils were not considered significant at the time. Their work was important often providing oil companies with crucial data.

H. T. Kniker used her initials only to avoid discrimination for a number of years in order to work in her position.