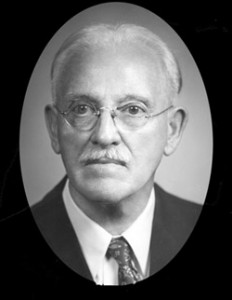 Joined the Department of Geological Sciences (UTDGS) in 1909 where he started one of the first micropaleontology courses.

Whitney and his numerous students are responsible for many of the fossil specimens in the NPL collections.

He was instrumental in acquiring the remarkable Engerrand-Chantegrain European Tertiary mollusc collection. This collection represents material from classic sites and had been initially purchased from S. Chantegrain by George Engerrand, a professor at UT. Whitney realized the importance of the collection and raised funds to purchase the specimens from Engerrand.

NPL has recently acquired several additional specimens from F.L. Whitney via the estate of Marion Whitney.