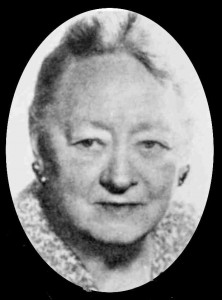 M.A. University of California at Berkeley

Employed as a paleontologist by Edwin T. Dumble at the Rio Bravo Oil Company.

Realized the importance of micropaleontology in the search for oil.

Taught for a short time in the Department of Geological Sciences at UT.

Later joined the USGS where she made important contributions to the seminal work in foraminifera of R. A. Cushman.