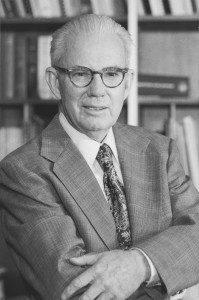 Virgil Everett Barnes was born in Chehalis, Washington, on June 11, 1903, the only child of Charles and Della Barnes. He grew up on a farm and during his teenage years, while attending high school in Adna, worked at times in a lumber mill. After graduating from high school in 1921 (he was one of eight in his graduating class), he matriculated to Washington State College, in Pullman, to become a civil engineer. After his first year in college, and some difficulty with trigonometry, he switched majors to geology, influenced primarily by a course taught by Olaf Pitt Jenkins, a Stanford graduate and the long-time State Mineralogist of California. Dr. Barnes completed his Master’s degree in geology at Washington State College under Harold E. Culver. For his doctoral work, he chose the University of Wisconsin, where his major interests lied in hard-rock geology, mining and metallurgy.

He completed his dissertation, under Professor A. N. Winchell, in 1930, just as the Great Depression was beginning. He had only two job prospects, one as a metallurgist for U.S. Steel in South Chicago and the other, a one-year fellowship with the American Petroleum Institute investigating earth temperature and oil-field waters in Texas. He chose the latter, hoping for more time in the field, rather than looking into a microscope, arriving in Austin in June 1930.

Tektites first came to Dr. Barnes’ attention in 1936 when the Bureau of Economic Geology sponsored a Works Progress Administration (WPA) mineral resource survey of Grimes County, Texas. At the time, it was commonly believed that tektites were meteorites. The Grimes County find piqued Dr. Barnes’ interest; subsequent research and review of published tektite literature resulted in the 1940 publication of the first of his many writings on tektites, “North American Tektites.”

Beginning in 1960, the National Science Foundation began support for Dr. Barnes’ research on tektites. During the ensuing years, Dr. Barnes visited every tektite strewn field: australites in Australia, javanites in Indonesia, indochinites in Thailand, Cambodia, Laos, Vietnam and Malaysia, philippinites in the Philippines, Libyan Desert glass in Egypt, Ivory Coast tektites in the Ivory Coast, and moldivites in Czechoslovakia.  In addition, Dr. Barnes also visited and studied certain impact structures, including among others, the Vredefort structure in South Africa, the Bosumtwi crater in Ghana, the Sudbury structure in Canada, and the nearly inaccessible craters of Wabar in the Rub’ al Khali in Saudi Arabia, and the Oasis structure in Libya.

Dr. Barnes became a professor in the Department of Geological Sciences at the University of Texas at Austin beginning in 1960. In addition to his duties as a professor, from 1961 to 1968, Dr. Barnes served as a research scientist and the Associate Director at the Bureau of Economic Geology. Beginning in 1961, Dr. Barnes directed the creation of the Geologic Atlas of Texas, producing 37, 1:250000 geologic map sheets, covering the entire state of Texas. He was conferred the title of Professor Emeritus in September, 1977.

In his later years, Dr. Barnes was named the Distinguished Texas Scientist in 1988, received the Barringer Medal from the Meteoritical Society at their 1989 meeting in Vienna, and was awarded the 1993 American Association Petroleum Geologists Public Service Award.  Dr. Barnes continued to active until the time of his death in 1998, continuing to hold positions as a Senior Research Scientist at the Bureau of Economic Geology, Professor Emeritus in the UT Department of Geological Sciences, and as the Associate Curator Emeritus of Meteorites and Tektites for the Texas Memorial Museum.