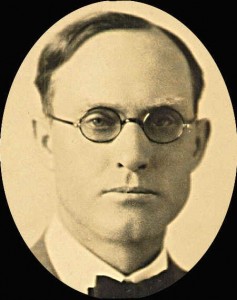 Moved to Texas in 1918 to join the Bureau of Economic Geology (BEG) under Johan A. Udden.

During his career he fulfilled the multiple roles of director of BEG, faculty member at the Department of Geological Sciences (UTDGS), and director of the Texas Memorial Museum (TMM). Director of BEG in 1932.

His early research was in fossil plants and insects from the Late Paleozoic of Kansas. NPL holds some of this collection.

He directed the Works Progress Administration (WPA) project at the Odessa impact site, overseen in the field by Glen L. Evans.

Learn more about Sellards, investigate some of his early research.