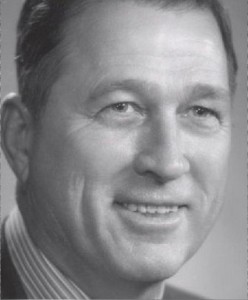 Born and raised in Henrietta, the county seat of Clay County, TX, where he was the fourth of seven children of Clifford and Dena Evans, Glen’s early life was tied to the land. After graduating from high school in 1928 he worked on several farms and for the Texas Highway Department driving horse-drawn equipment. Using his hard earned savings Glen left Henrietta for Austin in 1934 to study geology at the University of Texas.

Instrumental in several Works Progress Administration (WPA) projects and mineral and paleontology surveys for the University of Texas until 1941, Glen finally became the Assistant (and later Associate) Director of the Texas Memorial Museum and worked as a geologist for the Bureau of Economic Geology. Much of his time during the Second World War was spent in locating deposits of strategic minerals within the state of Texas.

His excavation of the Odessa meteor crater produced one of the best documented meteor crater sites in the country. (Read more) When NASA was concerned about the astronauts sinking into dust when they landed on the moon, Glen Evans was called to advise them on the effects of such impacts.

Regarded by many as the expert on Quaternary geology, Glen is responsible for much of the outstanding collection of Pleistocene vertebrate fossils held in the University’s Vertebrate Paleontology Laboratory. Friesenhahn Cave is one of the most important sites excavated by Glen. The Lake Channing Ash beds were an area where Glen collected invertebrate and plant fossils.

He left the University for employment in the oil industry in Midland, TX in 1953.

Then he  moved into managerial positions involving a spell in Canada. He returned to Midland in 1970 as Director of the Minerals Division of Louisiana Land and Exploration, and then on to Denver, Colorado. He ‘retired’ in 1975 and returned to his home state.

Glen, often referred to as the “Dean of Texas Paleontology” and “The Father of Geoarchaeology” passed away July 14, 2010.

Learn more about his life from the virtual exhibit Glen Evans: The Compleat Naturalist. Read his obituary.