The Jackson School of Geosciences’ Demian Saffer and Bridget Scanlon are each to give a Bowie Lecture at the American Geophysical Union’s 2022 Fall Meeting. The AGU’s Bowie Lectures are among the highest honors given to scientists within their fields.

Saffer is the director of the University of Texas Institute for Geophysics (UTIG) and a professor at the Jackson School’s Department of Geological Sciences. He and his research group focus on the mechanics of earthquake fault zones, which they study through a combination of field observations, laboratory experiments, and computer modelling. He has also led five major scientific ocean drilling expeditions to investigate large earthquake faults at the Pacific “Ring of Fire,” like the one that caused the 2011 earthquake and tsunami in northeast Japan.

Scanlon is a senior research scientist at the Bureau of Economic Geology, where she has worked for over 30 years. She is a world-leading authority on water research, its usage, storage and conservation. She has published over 100 articles in numerous peer-reviewed journals, including a 2022 study on water levels and use across Africa’s aquifers. She has served on National Academy of Sciences committees, been involved with U.S. Department of Energy scientific endeavors, and has been a member of the NASA GRACE science team, a group dedicated to using satellite gravity data to study how water is distributed and stored across Earth. 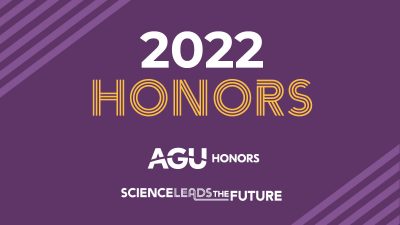 The AGU named lectures were announced September 6, with Jackson School faculty and researchers holding two of the 30 named lectureships in 2022.

AGU is a nonprofit organization that supports 130,000 experts and enthusiasts worldwide in Earth and space sciences. UTIG, the Department of Geological Sciences, and the Bureau of Economic Geology are units of the Jackson School of Geosciences.