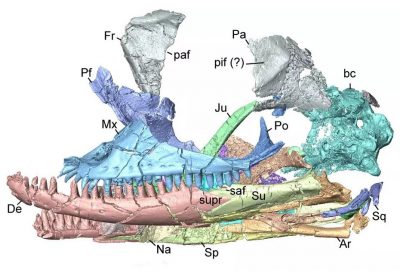 While browsing the fossil collections of Yale’s Peabody Museum of Natural History in 2017, Simon Scarpetta, a Jackson School of Geosciences graduate student, came across a small lizard skull just under an inch long.

The skull was 52 million years old and beautifully preserved, with a mouth full of curved, sharp teeth.

He took the skull back to the Jackson School for a closer look and ended up discovering a new species, which he dubbed Kopidosaurus perplexus.

The first part of the name refers to the lizard’s distinct teeth, which resemble a curved kopis blade. The second part is a nod to the perplexing matter of just where the extinct lizard should be placed on the tree of life.

According to an analysis conducted by Scarpetta and published in September 2020 in Scientific Reports, the evidence points to several plausible spots. The spots can be divided into two groups of lizards, representing two general hypotheses of where the new species belongs. How those two groups relate to each other can shift depending on the particular evolutionary tree that’s examined.

The case of where exactly to put the perplexing lizard highlights an important lesson for paleontologists: Just because a specimen fits in one place doesn’t mean that it won’t fit equally well in another.

Joshua Lively, a curator at the Utah State University Eastern Prehistoric Museum and Jackson School alumnus, said that embracing this uncertainty can lead to better science.

“Something that I think the broader scientific community should pull from this is that you have to be realistic about your data and acknowledge what we can actually pull from our results and conclude, and where there are still uncertainties,” he said.