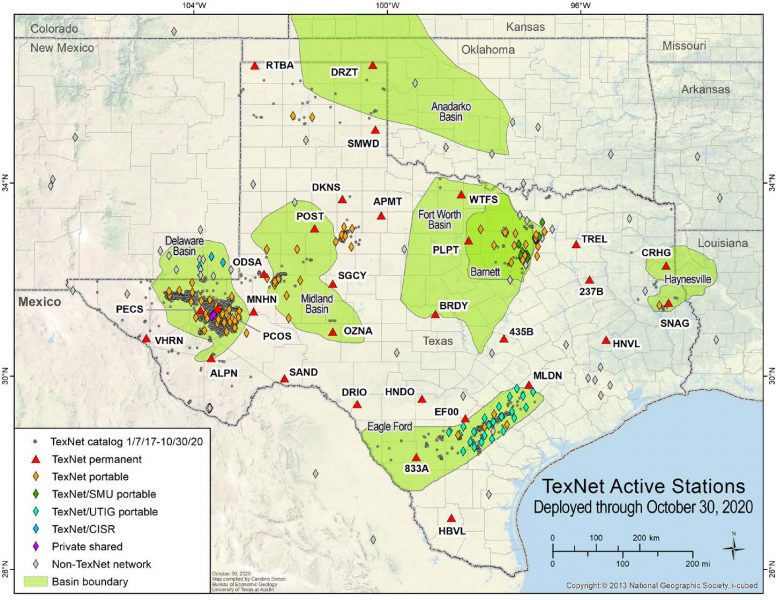 Now in its fifth year of operation, the Bureau of Economic Geology’s TexNet earthquake monitoring system manages more than 150 seismic stations throughout Texas and has been integrated into the country’s national monitoring system operated by the U.S. Geological Survey (USGS).

TexNet helps fill a major coverage hole in the national system, which had sparse coverage of the state. It is now part of the Advanced National Seismic System (ANSS), a network that provides real-time information about seismic activity to researchers and emergency responders. The addition was made possible by TexNet reaching several milestones. These include establishing 24/7 operations at all monitoring locations, having a seismologist on duty around the clock, and creating a backup infrastructure hub to ensure the system will continue operating if the primary hub fails.

“The U.S. Geological Survey’s Advanced National Seismic System is a cooperative effort to further the protection of life and property by monitoring seismic activity and issuing timely and reliable earthquake notifications,” said USGS acting Director David Applegate. “We welcome this new partnership with TexNet, which has successfully demonstrated its ability to meet high ANSS monitoring standards. TexNet earthquake solutions will become the authoritative source for the State of Texas on the earthquakes.usgs.gov webpage, which provides timely and accurate earthquake information to millions of users each month.”

TexNet is operated by the Bureau of Economic Geology at The University of Texas at Austin Jackson School of Geosciences. It was approved for state funding by Texas Gov. Greg Abbot and the state Legislature in 2015 to help determine what was causing an increase in seismic activity in parts of the state. TexNet began operating in late 2016 and now distributes earthquake information in less than 20 minutes from the time of occurrence for all events with magnitude of 3.0 or greater. The information is posted on the publicly available TexNet Earthquake Catalog and now the USGS ComCat catalog.

Before TexNet, only 18 public seismic monitors existed throughout the state. Now, there are more than 150, with a particular focus on areas exhibiting an uptick in seismicity.

The data collected by the seismic system, coupled with ongoing research by TexNet, is designed to help analyze earthquake activity, determine the causes, quantify hazards and future impacts, and provide quantitative data to the public. For instance, based on TexNet research in peer-reviewed publications, TexNet scientists have concluded that recent seismicity in the Delaware Basin (part of the Permian Basin in West Texas) is most likely induced by a combination of hydraulic fracturing and saltwater disposal.

“TexNet is providing critical data and unbiased research to help guide industry and decision makers and make the investigation of seismic data and earthquake activity accessible for all,” said Scott Tinker, the state geologist of Texas and director of the bureau. “This infrastructure is vital for the state of Texas, its continued economic well-being, and the safety of its citizens.”

The Railroad Commission of Texas, the state’s oil and gas regulator, uses information from TexNet to understand, regulate and mitigate seismic hazards. TexNet data and expertise are also used by other state, federal and local agencies as well as academic and research institutions throughout the world.

TexNet is documenting and assessing seismic activity in seven main areas of the state: the Delaware Basin and the Stanton-Midland–Odessa area of West Texas; the Panhandle; the Dallas–Fort Worth area; East Texas; the Eagle Ford area of South Texas; and Cogdell field near Snyder. All of these areas have experienced at least one earthquake event with a magnitude higher than 3.0 since September 2019.

TexNet Manager Alexandros Savvaidis said future plans include adding more stations in the Permian Basin area and the Eagle Ford Shale. Plans also call for further automation to decrease the time between a seismic event and when the information is posted, and to better illustrate when seismicity is occurring in clusters and how it is shifting across the state.