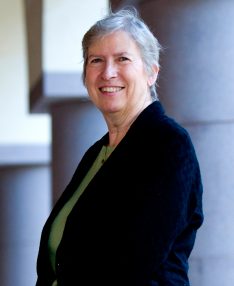 Professor Sharon Mosher, the former dean of the Jackson School of Geosciences and the William Stamps Farish Chair in Geology, has been awarded the 2020 Marcus Milling Legendary Geoscientist Medal by the American Geosciences Institute (AGI). “I am very honored to receive this award, following so many distinguished past recipients,” Mosher said. “Geosciences has been my lifelong passion, and I have been fortunate to have so many opportunities to contribute. But the best part has been working with so many wonderful fellow geoscientists.”

The Marcus Milling Legendary Geoscientist Medal is a lifetime achievement award, given in recognition of an individual’s high quality basic and applied science achievements in the earth sciences. The award, established in 1999, was named in late 2006.

Marcus Milling was an ardent and tireless champion of geoscience education, policy and information services who served as AGI’s executive director from 1992 to July of 2006, when he transitioned to a senior adviser role. “Sharon Mosher’s long service to AGI, as an officer and as a former president, is well known,” said AGI President Carolyn Olson. “What many of us in the geoscience professional community have come to admire most in Sharon is her thoughtful leadership, vision and fortitude in shaping the future of the geoscience community.”

Mosher gained renown as a major contributor to the geological sciences through her research in tectonics, structural geology and petrology, her work improving geoscience education, and her leadership within the geoscience community. She is well known for her recent role as Jackson School dean, where she faced the challenges of leading three independent units of geoscience as one successful school.

Under Mosher’s leadership, the Jackson School earned its ranking as one of the top-rated geoscience schools in the United States. Additionally, Mosher had the vision and accomplishment of leading the development of GeoScienceWorld, an international journal aggregation for geologists and a nonprofit startup that has grown to be a substantial force in worldwide scientific digital access for universities and companies.

Mosher has exerted far-reaching influence through her leadership in developing geoscience curricula for the future by gathering colleagues from around the world. Mosher has served in several society leadership roles, including president of AGI (2012-2013), president of the Geological Society of America (GSA) (2000-2001), and chair of the Council of Scientific Society Presidents (2004). Her awards include the Association of Women Geologists Outstanding Educator Award (1990), the GSA Distinguished Service Award (2003) and the Alumni Achievement Award from the University of Illinois at Urbana-Champaign College of Liberal Arts & Sciences (2016).

“Sharon Mosher is never just a member of anything,” said Robbie Gries, former president of the Geological Society of America, in nominating Mosher for the award. “She puts heart and soul into leadership, direction, fiscal stability, creative innovations and attention to the needs of all — all the while educating students, the public, colleagues and politicians. To follow her path in any organization is to be the lucky beneficiary of her wise impact and trailblazing.”

This text was adapted from a release that originally appeared on the AGI website.