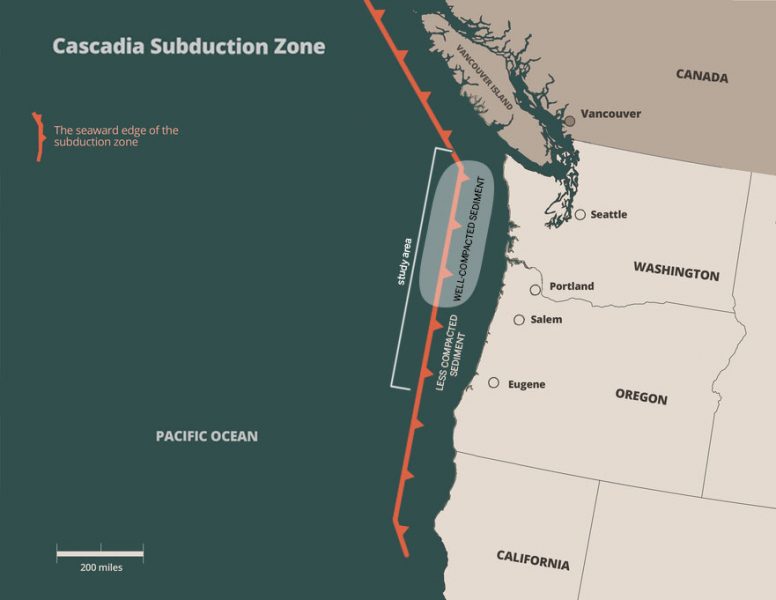 The Cascadia Subduction Zone off the coast of North America spans from northern California to southern British Columbia. This subduction zone can produce earthquakes as large as magnitude 9 and corresponding tsunamis.

The Cascadia Subduction Zone in the Pacific Northwest is an incubator for powerful earthquakes — and according to the geological record, the region is due for a “big one.” Sediment on the seafloor may be a key factor in determining where along the zone the next big quake will strike.

The research, published in Nature Geoscience on Nov. 20, 2017, found that compact sediments along the zone near Washington and northern Oregon could make the tectonic plates more susceptible to sticking to each other. Subduction zones are the places where one tectonic plate dives beneath another, creating a trench. When the plates move after enduring centuries of tension, the released energy creates earthquakes and tsunamis. 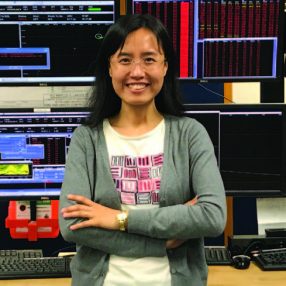 to the trench, which increases both earthquake and tsunami hazards,” said lead author Shuoshuo Han, a University of Texas Institute for Geophysics (UTIG) research associate who conducted the work as a UTIG postdoctoral fellow.

The Cascadia Subduction Zone runs roughly from Vancouver, Canada to northern California. Han and her collaborators conducted a seismic survey off the coast of Washington and Oregon that allowed them to see up to four miles of sediment layers overlying the subduction zone.

According to the geologic record, the Cascadia Subduction Zone generates a large earthquake about every 200-530 years. And with the last large quake occurring in 1700, scientists are expecting another earthquake within the next couple of centuries.

Han’s research could help scientists understand factors that influence how earth-shaking events occur in Cascadia and subduction zones around the world. The researchers note that a large earthquake anywhere along the subduction zone would have serious impacts for Cascadia, not just areas closest to the event.