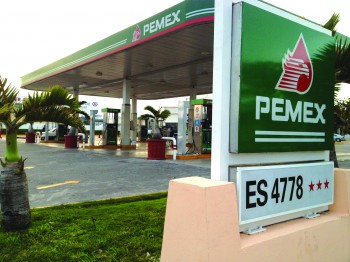 The Congreso Mexicano del Petróleo, or Mexican Petroleum Congress, bills itself as the most important forum for scientific exchange for oil and gas exploration and production in Mexico.

For years it has gathered engineers and executives to share their views on the future of Mexico’s petroleum industry.

This year, however, the crowd was much more diverse.

“It used to be mostly folks from Pemex and those working as service providers in Mexico,” said Scott Tinker, director of the Bureau of Economic Geology (BEG) at the University of Texas at Austin and the luncheon keynote speaker at the Congreso this June. “This year, it was everyone interested in Mexico.”

The increased interest stems from the Mexican government’s December 2013 decision, under the leadership of President Enrique Peña Nieto, to end Pemex’s 75-year monopoly over that nation’s oil and gas industry.

Allowing foreign companies and investment in its energy sector is uncharted territory for Mexico. The country nationalized Pemex in 1938 under President Lázaro Cárdenas with a revolutionary, nationalistic rhetoric that equated state-owned energy resources with sovereignty and national pride.

Oil revenues became a cornerstone of the Mexican economy, with Pemex taxed so heavily it funded as much as 40 percent of the national budget.

For decades, the company did well, buoyed by the country’s rich reserves, rising production and high oil prices. But a lack of investment finally caught up with the company. In 2013, Mexico produced 2.5 million barrels per day of crude oil, down from its peak in 2004 of about 3.4 million barrels per day—roughly a 26 percent decline. And a lack of refinery capacity has meant increased transportation fuel imports from the United States.

Now, Mexican officials preparing to open the country to competition must craft an entirely new regulatory and legal framework to guide the outside exploration and exploitation of its untapped oil fields, shale formations and deep water.

The challenges are tremendous, but so are the opportunities, most obviously for deep-pocketed international oil companies, which have been pushing Mexico to open for years.

But opportunities also abound for Texas companies—mid-sized and small oil and gas independents, equipment and service companies, and consultants who specialize in engineering and construction, environmental issues and financial and legal work.

Overall direct and indirect investment could be $1 trillion from the deregulation of the Mexican oil and gas industry, according to a recent economic impact study from Morgan Stanley.

As the transition occurs, opportunities for the university also abound.

“We have been working on a Mexico strategy,” said Jorge Piñon, who leads the Jackson School of Geosciences’ Latin America and Caribbean Energy Program and is currently serving as interim director of the Center for International Energy and Environmental Policy (CIEEP).

Created in 2005, the CIEEP brought together the Jackson School (which itself was established as a college that year), the College of Engineering and the LBJ School of Public Affairs with the goal of infusing policy-making with scientific and engineering expertise.

As with other countries in Latin America, Piñon said, the challenge for Mexico is not its resource base—it has high potential for shale gas reserves—but in creating the right economic and regulatory model to develop it.

While the Jackson School—particularly the BEG—has enjoyed research and academic relationships with Mexico and Pemex for decades, the liberalization of Mexico’s energy industry offers an unprecedented opportunity for the university to deepen those ties and offer expertise and guidance across disciplines.

“Energy, environment, economics, education,” Tinker rattled off. “We’re pretty passionate that these four E’s need to work hand in hand” to help solve the kinds of challenges facing Mexico as it moves forward.The BEG can help with the technical side of the equation, he said, by working with Pemex and other companies to understand the opportunities in the country’s shale basins and deepwater formations.

The BEG can also help with “above ground” issues such as water, land use and the environment as infrastructure is developed.

“Parallel to that, however, must be the creation of a strong regulatory framework that offers transparency and certainty,” said Tinker.

International oil companies will bring capital and expertise and help spread the risk and costs of exploration, but in exchange they expect a stable, long-term operating environment guided by accountability and the rule of law, he continued.

That’s where the expertise of the university’s business, law and public policy schools could come into play.

John C. Butler is an associate professor with the McCombs School of Business and the academic director of its Energy Management and Innovation Center. He’s been working with Piñon, Melinda Taylor from the Law School and Eugene Gholz of the LBJ School of Public Policy on a Mexico strategy.

Having the university’s various schools collaborate “really encourages open dialogue and opens doors to different ways to attack these kinds of problems,” Butler said. “And as part of that effort, we’ve targeted Jorge as a natural as we look to do more with Latin America.”

Piñon, hired three years ago by the Jackson School after a career in the private energy sector, said his is “an enabler role” to bring together expertise from the various schools to connect and offer guidance, not just to Mexico, but to other Latin American countries as they work through similar transitions.

He, Butler and Tinker pointed to work they’ve done with Brazil and its oil company, Petrobras, and the valuable “lessons learned” that Tinker shared with the Congreso audience of 1,200 in June.“External investment was necessary to share costs and open up the country,” Tinker said.

New players energized the industry. But Petrobras, which remains largely under national control, has struggled to increase oil production while management has been ensnared in political scandals.

Pemex faces similar challenges as it ramps up to compete for the first time in 75 years. The company has not kept pace with exploration or extraction technologies, and many of its engineers are retirement age. Others are sure to be poached by companies entering Mexico, eager to gain local knowledge. The university can help Pemex, and the country, with academic training and research as it develops the next generation of oil industry engineers and executives.

While the main focus of deregulation has been on the oil and gas industry, Mexico has also set targets for a greater reliance on renewables and a reduction in greenhouse gas emissions.

Mexico has “incredible potential in wind, geothermal and solar, as well as small hydroelectric power plants,” said Maria de Lourdes Melgar Palacios, undersecretary of hydrocarbons in the Mexican Ministry of Energy. She spoke at a recent seminar in Houston hosted by the university and the Atlantic Council.

A visiting fellow at CIEEP in 2008 and 2009, Melgar said foreign companies have begun submitting proposals to move into Mexico, but she doesn’t expect the first contracts to be awarded before 2015.

Piñon, who notes that it takes three to five years to bring a deepwater well online, envisions a thriving, highly productive industry in the next 10 to 25 years. He sees the industry bringing in as-yet unrealized revenue streams from taxes and royalties, and creating jobs at every level in the economy.

If successful, the changes have the potential to snowball into far-reaching economic reform in Mexico, Piñon said, through what Tinker calls “social investment” in education, entrepreneurship, infrastructure, health and agriculture.

A successful energy industry in Mexico with good jobs and infrastructure spending would even reduce illegal immigration into the United States, Piñon said.

“This could be huge for U.S.-Mexico relations,” he added. “We all have a role to play to help Mexico achieve its goals.”