From the late 1940s through the early 2000s two colleagues at the University of Texas at Austin amassed a globe-spanning collection of sedimentary rocks. Robert L. Folk (1925-2018) began collecting in childhood and by the time he arrived at the University of Texas at Austin in 1952 he had begun the systematic accumulation of sedimentary rocks from all over the world. With the arrival of colleague Earle McBride in 1960, Folk was joined by a like-minded collaborator and together they systematically collected and thin-sectioned specimens for teaching and research. Today, the collection stands at over 17,000 thin sections, many of which are accompanied by hand specimens and data in publications and student theses.

From a historical standpoint, materials accumulated in the 1950s through 1960s represent the foundation of the Folk classifications for both limestone (Folk, 1959) and sandstone (Folk, 1970), as well as the influential textbook “Petrology of Sedimentary Rocks” (1980). The sandstone classification in particular, based on the concept of classifying sandstones based on the ratio of quartz-feldspar-and lithic (QFL) fragments, drove development of two major research areas (provenance analysis and reservoir quality studies) that remain highly active today.

Materials collected for student theses from the later 1960s to the early 2000s enabled fundamental contributions on reservoir quality prediction using the Gulf of Mexico sedimentary basin as the primary natural laboratory. Seminal papers and concepts on quartz and carbonate cementation, secondary porosity, and compaction were developed on materials contained within the collection.

What We Seek To Support

It’s not just about history, however. The large size of the collection, together with its extensive documentation and data, makes this unique collection a resource for the future. Support for the collection to enable proper storage, archiving, and high-resolution scanning, will prepare the collection for use in modern machine learning and artificial intelligence algorithms. These new avenues of research stand to revolutionize petrography and subsurface science in ways that were scarcely imagined at the collection’s inception.

Storage and archiving will be directed by the Jackson School Museum of Earth History (include link) and the digital “virtual thin sections” will be made publicly available for teaching and research through the Digital Rocks Portal, a project of NSF’s EarthCube collaborative.

The following levels of support are suggested, but any support is welcomed. At currently available pricing (academic rate) it costs $100 to scan a thin section in plane-light and cross-polars modes. View demonstration scans from the collection.

All levels of support are considered a research gift to university. Donations of $1,000 and above will be named on the collection landing page. 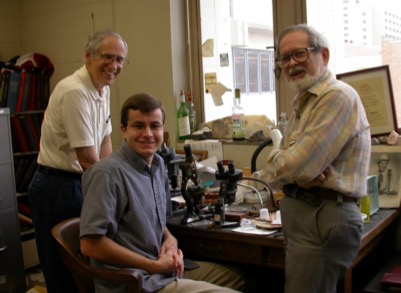