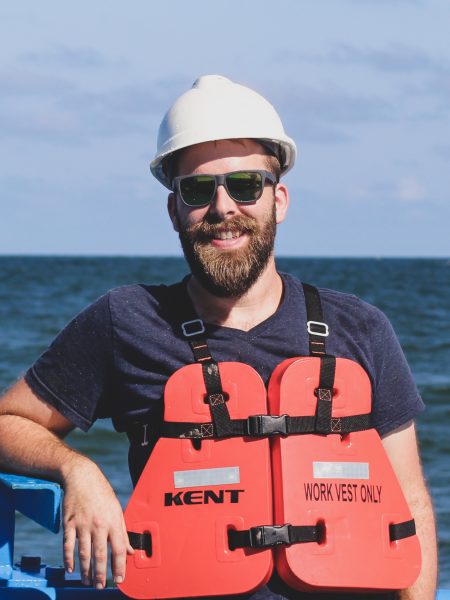 Chris Lowery, a research associate at the University of Texas Institute for Geophysics, has received the James Lee Wilson Award from the Society for Sedimentary Geology (SEPM). The award recognizes significant research accomplishments by an early career scientist.

Lowery’s work has led to advancements in understanding the environment of Earth’s ancient oceans and its marine life. His research has revealed key moments in the Gulf of Mexico’s past including the recovery of life after the extinction of non-avian dinosaurs. He is also highly active in the International Ocean Discovery Program (IODP) and recently co-founded a workshop to engage young scientists with scientific ocean drilling.

“Chris has earned national and international recognition, not just for his work as a micropaleontologist and sedimentologist but in integrating these datasets with tenets of modern life science to illuminate global change and to decipher key events in Earth’s environment and climate,” said UTIG Director Demian Saffer.

Lowery joined UTIG in 2016 as the first Richard T. Buffler postdoctoral fellow, where he soon made his mark mapping a barrier reef system that grew in the Gulf of Mexico over a hundred million years ago.

In 2017, he embarked on the UT-led international scientific ocean drilling expedition that explored the Chicxulub crater – the impact site of the asteroid that wiped out the dinosaurs. Lowery found microfossils buried within sediment cores drilled from the crater’s peak ring, indicating that the crater was already teeming with plankton and algae just a few years after impact. He published his results in a 2018 Nature paper and followed it with evidence that evolution imposes a speed limit on the recovery of life after an extinction event.

“The (IODP) drilling program is foundational to many major discoveries,” he said. “It’s the reason we have good records of climate and sea level change through the past hundred million years. So, I think it’s really important for early career scientists to participate in and try to guide the direction of the program.”

As an early career scientist, Lowery’s doing just that. He helped co-write the IODP’s new science framework (a document outlining priorities for future scientific ocean drilling through 2050), and he has cofounded Demystifying the IODP Proposal Process for Early Career Scientists, a series of workshops aimed at guiding early career scientists through the process of planning their own science expeditions. He is also a regular instructor for the Marine Geology and Geophysics Field Course, a flagship student field experience at UT Jackson School of Geosciences.

“I feel like that the very best thing we can all do as scientists is to build up the next generation and pass the torch to them as early and as often as possible,” Lowery said.

Lowery will be presented the James Lee Wilson Award, in absentia, in April 2022 at the SEPM Science Awards (he will be at sea during this year’s meeting). SEPM is a non-profit society that focuses on enriching professionals and students within sedimentary geology.