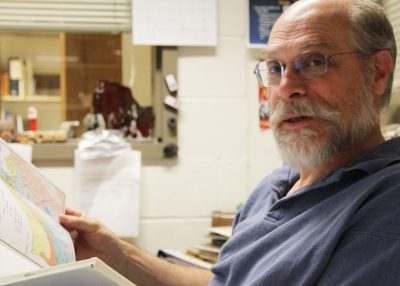 My experience with Dennis Trombatore began shortly after I arrived at UT, with an email introducing me to the Walter Library. The note was long and detailed, and I was struck by Dennis’ encyclopedic knowledge of our library, its challenges and opportunities. Even without meeting him, it was clear that Dennis was a force of nature and that his work greatly benefitted the Jackson School. With the covid shutdown, I was never able to meet Dennis in person, which will forever be my loss. After his passing this weekend, I asked Sharon Mosher, who worked with Dennis for many years, to write the following memorial to this special colleague so that his many contributions could be fully appreciated.

I am deeply saddened to let you know that our dear friend and colleague, Dennis Trombatore died at peace early Sat., July 18th after a long illness.

Dennis Trombatore was the Head Librarian for the Walter Geology Library and the Tobin International Map Collection at the University of Texas at Austin since 1985.  Dennis developed a world-class geosciences library that is renowned throughout the country and was widely respected by the geoscience and librarian community nationwide. He was an integral part of our college, providing a wealth of information, research, and instruction.  He was a fount of knowledge with a savvy perspective on our changing media landscape and the implications for the people who learn and do research here at the Jackson School and in the geosciences. He threaded his expertise and kindness throughout our entire school community.  He not only brought an immense knowledge, but he treated each and every person entering the library as a true guest and strove to have all exit with more knowledge than when they entered.

In 2018 he was awarded the Jackson School of Geosciences highest honor, the Joseph C. Walter Excellence Award, recognizing his demonstrated excellence in all of the areas of the School—research, teaching, service, professional activity, and administration. Nationally Dennis was honored by American Geosciences Institute (AGI) with the 2012 William B. Heroy Award for Distinguished Service. He was a long-time member and Chair of the GeoRef Advisory Committee and represented AGI on the GeoScienceWorld Publisher’s Advisory Council, helping strengthen the relationship between the two organizations.  When we established GeoScienceWorld, Dennis’s advice and counsel was invaluable.

He received many other awards over the years, including the Department of Geological Sciences Distinguished Service Award in 1997, University of Texas Staff Excellence Award in 2001 and Jackson School of Geosciences Staff Excellence Award in 2006.  He was a member of the Geological Society of America, the Geoscience Information Society, and was President of the Austin Geological Society. He received his B.A. and MLS from Louisiana State University in 1975 and 1977, respectively. His extensive library science career began shortly thereafter: acting as the Common Curriculum Librarian at Loyola University for three years, and the Physical Sciences Bibliographer at the Science Library of the University of Georgia for five years.

In 2019, the Dennis Trombatore Excellence Fund for the Walter Geology was established in the Jackson School of Geosciences to honor him.

What made Dennis so special to so many of us?  He would help anyone, graduate student, undergraduate student, faculty, researcher, staff who was searching for information – be it an obscure reference or support for a budding theory.  If he came across something of interest that he knew you were working on, he would send you the article.  He demonstrated a deep concern for the development of students, advising them in the classroom and through individual consultations as they pursue both their immediate research goals, and longer term career goals.  He was always there to help – whether it was a leak in the library roof or if an emeritus faculty member was ill or in the hospital.  The Walter Geology Library was a well-run ship that we can all be proud of thanks to Dennis’ years of hard work and going above-and-beyond.

Dennis, without thinking, conducted himself with an amazing balance of compassion, accountability, and respect; and he quietly challenged others to do the same. He will be deeply missed.