The Arctic covers about 20% of the planet. But almost everything hydrologists know about the carbon-rich soils blanketing its permafrost comes from very few measurements taken just feet from Alaska’s Dalton Highway.

The small sample size is a problem, particularly for scientists studying the role of Arctic hydrology on climate change. Permafrost soils hold vast amounts of carbon, which could turn into greenhouse gasses. But the lack of data makes it difficult to predict what will happen to water and carbon as the permafrost melts due to warming temperatures.

New research led by scientists at The University of Texas at Austin may help solve that problem.

The scientists spent the past four summers measuring permafrost soils across a 5,000 square-mile swath of Alaska’s North Slope, an area about the size of Connecticut. While working to buildup a much-needed soil dataset, their measurements revealed an important pattern: The hydrologic properties of different permafrost soil types are very consistent, and can be predicted based on the surrounding landscape.

“There is a vast swath of land that is eminently predictable,” said Michael O’Connor, who led the research while earning his doctoral degree from the UT Jackson School of Geosciences. “Our paper shows that over an enormous study area, these very simple patterns in these properties hold true.”

The study was published in the journal Geophysical Research Letters. Co-authors include researchers from the Jackson School, UT’s Cockrell School of Engineering, Utah State University and the University of Michigan.

The researchers examined nearly 300 soil samples from different types of terrain. They found that soil types and their thickness are closely associated with the landscape, with the researchers classifying the landscapes into five categories based on the dominant vegetation and whether the environment was on a hill slope or near the bottom of a river valley.

They also found that each of the three soil types had distinct properties that impacted how easily the soil could transfer heat and water – which determine how carbon dioxide and methane, another powerful greenhouse gas, are released.

The findings will allow scientists to look to the landscape to understand how carbon and greenhouse gasses are moving through the soil below.

While the study does not make predictions about carbon release, co-author Bayani Cardenas, a professor in the Jackson School’s Department of Geological Sciences, said that it provides a research framework. 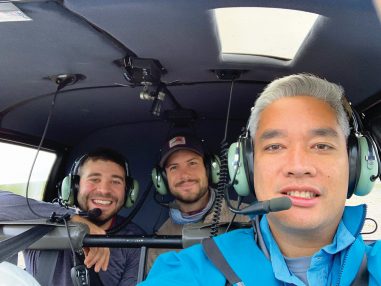 “Our data fills a knowledge gap that has been around for 30 years,” Cardenas said. “The community studying permafrost and climate change will appreciate its inherent value.”

Permafrost locks away about as much carbon as what is already in the atmosphere. However, until this study, climate modelers lacked direct permafrost soil information, with the research record limited to about a dozen samples taken along the Dalton Highway and engineering reports that studied permafrost for road and pipeline construction.

Improving the data available to climate scientists was the primary motivation behind the permafrost collection campaign, said O’Connor. The North Slope of Alaska is almost pure wilderness. The research team relied on a helicopter to get around and an 18-inch breadknife to slice blocks of soil from the earth.

“We were in some places that probably no human had set foot on.” Cardenas said.

Finding a pattern between the landscape and the permafrost soil patterns did not come as a surprise. Plant ecologists working in the region had mentioned it anecdotally. But the newly published data is something the entire research community can draw on.

Cathy Wilson, a hydrologist and climate modeler at Los Alamos National Laboratory who also conducts permafrost research in Alaska, said that the study is a big step for climate models, and that she is looking forward to applying study techniques in her own work.

“This allows us to really start to scale-up this valuable information on soil properties to at least the North Slope, the foothills of mountain ranges, and beyond,” she said.

The research was funded by the National Science Foundation, The University of Texas at Austin Geology Foundation, the Geological Society of America Student Research Grant program, the American Geophysical Union Horton Research Grant, and the NASA Terrestrial Hydrology Program.