A LIVING CLASSROOM: Generations of Geoscientists Will Benefit From Les and Dianne White’s Epic Donation

As Les White walks the 266 acres of his beautiful Hill Country ranch, he’s every bit the geologist. He knows every rock, every stream, every outcrop, and he carries a white board to help him map out the features and explain them to guests. He’s even had a creek on the ranch named Cardium Creek by the USGS, after the fossil mollusks that abound on the property.

White loves the ranch and the opportunity it offers him to spend time outside sharing its natural splendor, and maybe a few geology lessons, with friends and family. But he loves his alma mater even more. That’s why Les and his wife Dianne have gifted the ranch to The University of Texas at Austin Jackson School of Geosciences through the University of Texas Foundation to act as a living classroom for future generations of geoscientists to learn their craft.

“Geologists need to be outside,” said White, who graduated from UT with a degree in geology in 1956.

The property — roughly an hour’s ride southwest of campus outside Dripping Springs — is a game changer for the Jackson School, particularly for hydrogeology research and education. The school’s mission involves tackling the big, hard issues facing Texas and the world. These are issues like how to manage scarce water resources in the face of a booming population or, conversely, how to determine when heavy rains will turn into dangerous floods. 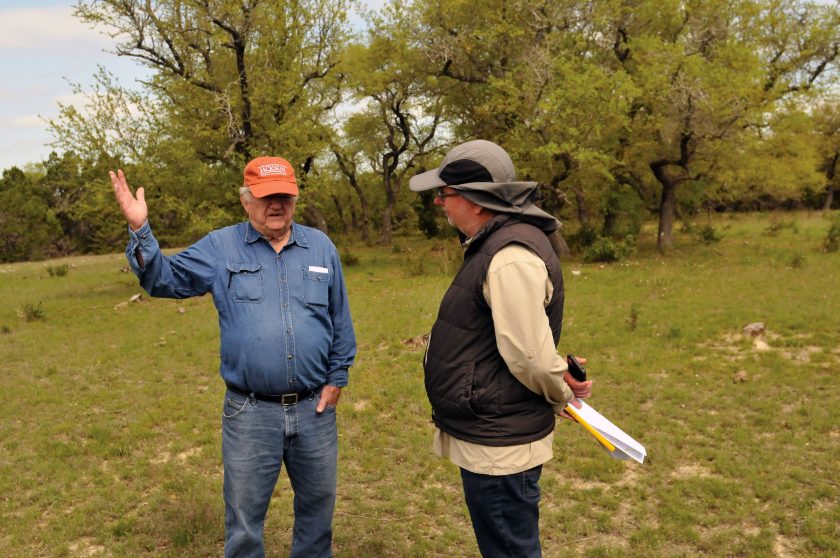 Conducting the type of science that provides the knowledge and understanding of ecological and hydrological processes necessary to tackle these issues requires long-term access to key research sites. Educating students to understand these challenges and someday take leadership roles to overcome them is something that really can’t be taught in the classroom.

“Field work is foundational for geosciences education at every level,” said Jackson School Dean Sharon Mosher. “I can’t stress how important Les and Dianne’s donation is to the school and the opportunities it affords us to educate young geoscientists. Their foresight and generosity will pay dividends for Texas and beyond for generations to come.”

White was at the ranch in May when students had their first look at the property, as Jackson School professors incorporated a visit into the annual hydrology field camp.

“It just thrills me to see these young people out here,” he said.

White passed when given the chance to offer any pearls of wisdom, telling the group that he was “skeptical about the correlation between gray hair and wisdom.” But he did relay wisdom that had been imparted to him as a student; “question all things, do your own thinking.” And he asked them to be sure to save back a little money from their pay checks to give back to the university, particularly to a Jackson School endowment he’s started with matching funds from Exxon. The endowment will pay for the property’s upkeep and eventually pay for a few educational facilities. He had advice for how to do so, even on a potentially meager early career paycheck.

Students were thrilled with their first trip to the property and said that White was inspiring. Master’s student Lakin Beal, who did her undergraduate work at Idaho State University, said she was surprised by how beautiful the property was, having envisioned Texas as flat and barren. Lakin’s research focuses on urban waterways, specifically Austin’s Waller Creek, but she said that the opportunity to visit White’s ranch gave her a perspective that will help her research.

“It was great to span out to the Onion Creek watershed and see what a natural environment in Texas looks like,” she said. “To see what a functional Texas watershed looks like is a view of how we’ve changed these watersheds so much with urban development. The property is just beautiful, and I’m grateful that we were able to spend the day out there and pick his brain on his knowledge of hydrology and what the property has to offer.”

The property contains rolling meadows, wooded hillsides and a 1920s-era windmill. The ranch is transected by South Onion Creek and many smaller waterways, and White has documented over 140 different species of plants on the land.

“It’s absolutely a dream come true in terms of being a hydrologist or an ecohydrologist in particular,” said Assistant Professor Ashley Matheny, who helped lead the field camp. “There are many different avenues for research that we can pursue. Not just the typical hydrology research you think of in terms of stream gauging, well pumping and aquifer testing, but also in terms of understanding how the landscape interacts with hydrology.”

White, who spent a career with Humble Oil and Exxon, began buying the property that would make up the ranch in 1995 and has enjoyed it with family and friends throughout the years. Among his many fond memories is hosting the 92nd birthday party of one of his former UT geology professors, the legendary geologist Stephen Clabaugh. It’s a story he likes to share, as he did with the students, because it shows the lifelong connection he made as a student to a teacher who influenced his life both academically and as a role model.

“The school for me became like extended family,” he said. “I’ll bet you will find that for yourself too.”

White clearly remembers his journey to the Forty Acres more than half a century ago, from hitching a ride from his home
town of Waco to his first nervous days looking for a job that would allow him to pursue his studies. He fondly talks about his time as a student as one of “luxurious poverty” — full of rich learning and life experiences, despite not always being sure of how to scrounge next month’s rent.

Ironically, White wasn’t in love with geology when he came to campus. He was young, bright and hardworking and pursued geology because it offered him a good chance of a productive career. But he developed a lifelong love of the science along the way and said he jumped at the chance to help others do the same.

“I have no doubt this pretty piece of land will yield a rich harvest of learning for the students and faculty of the Jackson School,” White said. “The reward for me and my family is being part of something as great as the Jackson School and helping them be even greater.”

The ultimate plan for the property is still being developed and will likely change over time with research and educational needs. Jackson School Associate Dean for Research David Mohrig said the property can play a big role in the school’s emerging plans to establish a Texas Observatory that focuses on the science and human impacts of water, weather, surface processes, energy resources, tectonics and geochemistry in the state of Texas. But as an educator, Mohrig said he knows the donation will pay dividends far beyond what can be scripted out in an educational or research plan.

“Just having a place like this and getting students out here can change a whole generation’s idea of what the environment is,” he said.