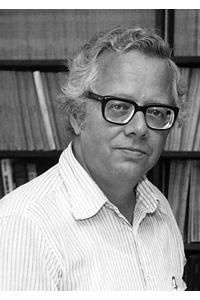 Dr. Milo M. Backus, a giant in geophysical exploration and the Shell Companies Foundation Distinguished Chair Emeritus in Geophysics and Professor Emeritus, died earlier this week. He was an individual of great vision, noted as one of the greatest in the history of the exploration geophysics profession, and a pioneer in 3D seismic imaging.

Milo was awarded the Maurice Ewing Gold Medal in 1990 from the Society of Exploration Geophysicists and the Conrad Schlumberger Award from the European Association of Geoscientists & Engineers (EAGE) in 1975.  He was inducted into the Jackson School of Geosciences Hall of Distinction in 2011.

His citations for these awards highlight his amazing contributions to the profession: He was the mastermind in the creation and application of many digital signal processing techniques, and he personally conceived or contributed to the development of many of the first processing algorithms. A decade later, he thought through and led the development and promotion of the practical application of 3-D methods to exploration and production. These two contributions, in and of themselves, would indisputably elevate Milo into the ranks of the giants of geophysical exploration. He was the chief architect and creator of the digital revolution, both as an individual contributor and as a manager of research.

Milo earned his Ph.D. from MIT in 1956. He joined the Department in 1975 after decades working as a geophysical contractor and consultant.  As a faculty member, he initiated a consortium, Project SEER (Solid Earth Exploration Research), and nurtured the next generation of geophysicists. On retirement in 1998 he became a Senior Research Scientist at the Bureau of Economic Geology. He was the Society of Exploration Geophysicists President from 1979 – 1980 and was made an Honorary Member in 1988. More information about his long legacy can be found here.

His family will have a small, private gathering in Cape Cod later this summer to honor Milo.  They have asked that in lieu of flowers, contributions go to the JSG Milo M. Backus Endowed Fund in Exploration Geophysics. Email gsanders@jsg.utexas.edu to make a gift in his memory.

Milo was a brilliant and insightful faculty colleague. He made a major impact on the field and his students. He will be greatly missed.