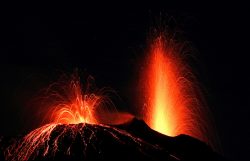 THE WOODLANDS, Texas – Life came back surprisingly quickly to the site of the impact that killed the dinosaurs, new research found.

When a 6-mile (10 kilometers) asteroid slammed into the Gulf of Mexico 66 million years ago, causing the demise of the dinosaurs as part of the largest mass extinction event in the last 100 million years, it took life on the planet at least 30,000 years to bounce back. The space rock also melted the crust and mantle at the point of impact, making modern scientists suspect that life would have had a particularly challenging time recovering at that location.

Yet a core sample from the crater rim has revealed that, even at ground zero, life managed to bounce back rapidly, closely matching the resurgence of life around the globe. [Wipe Out: History’s Most Mysterious Extinctions]

“Life returned to the crater very quickly,” Christopher Lowery, a researcher at the University of Texas-Austin, said during a news conference at the Lunar and Planetary Sciences Conference (LPSC) here in Houston on Tuesday, March 21. Microfossils found in the core sample show that life at the crater reappeared after about 30,000 years, roughly when it reappeared in other locations, according to Lowery.

“You see [that resurgence] across the globe,” Lowery said.