GEO 193 Dives into Carbonate Geology of the Bahamas 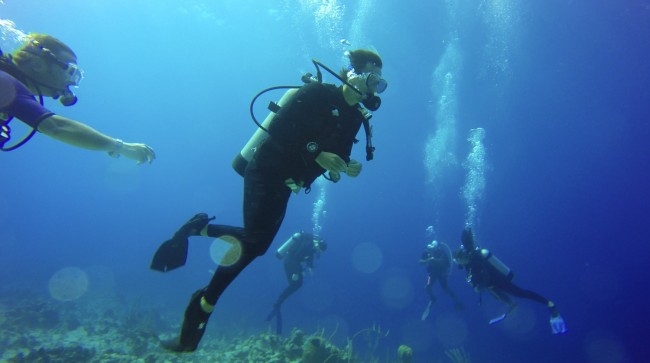 The challenging syllabus for the Jackson School’s new GEO 193 Carbonate Geology of San Salvador, Bahamas featured a unique prerequisite: open water scuba certification. Fortunately, the assembled students were up to the task and those not previously certified achieved certification before heading to San Salvador. Additional training on site was made available by Jackson School alum and Senior Geoscientist at Whiting Petroleum, Jerry Bellian, PhD. He ran eight students and three  instructors (Charlie Kerans, Department of Geological Sciences; Chris Zahm, Bureau of Economic Geology, and Steve Bachtel, Chevron Energy Technology Company, UT Geosciences adjunct professor, and Geology of Turks and Caicos co-instructor) through the PADI Advanced Open Water course during evenings and additional dives, allowing the entire group to descend to the depths necessary to observe processes along the reef front and upper slope. This is a first for the carbonate program at the Jackson School, but one that was well worth the added effort.

The goal of the Geology of San Salvador class is to provide a holistic view of island evolution, including study of the Pleistocene “bedrock” of the island, the shallow marine environments of the surrounding shelf, shelf-edge reefs, and the upper reaches of the slope apron, where enormous blocks that spalled off the reef front could be observed directly.  This first offering of GEO 193 San Salvador was made possible by substantial contributions from the Shell Graduate Field Seminar program and the Jackson School Robert K. Goldhammer Chair. The class is a mix of lectures on campus as well as the eight days on island where the Gerace Research Centre provided economical and superb room, board, and facilities.

Several students in this class had been part of the GEO 293 Modern Carbonate Environments of the Caicos Platform class in Turks and Caicos, BWI, while only a couple had had the opportunity to study the depositional profile as it extends below snorkel depths onto the reef wall and upper slope (60-120 feet and beyond). Kerans, Zahm, and PhD student Andrea Nolting had observed the reef wall and upper slope profiles along the margins of the Caicos Platform during their dives in 2015, and realized the importance of the steep reef wall profile and collapsed margins along the western and southern margins of the Caicos platform for understanding island evolution. They were not prepared, however, for the frequency and scale of collapse features observed by the class along the San Salvador margin during the 11 dives on the western wall that were part of class field work. An imperfect analogy to the observed spalling of reef blocks from the vertical shelf margin is the calving of icebergs observed on the front of active glacial ice shelves, except the carbonate blocks sink and form a steep talus slope. The failure process and linked fracture systems is a current focus of Nolting’s PhD and Chris Zahm’s ongoing study of steep-rimmed platforms.

To build on the understanding of Pleistocene evolution of San Salvador, the class dissected the well-studied Pleistocene stratigraphy of the 125,000-year-old Cockburn Town reef system. This fascinating deposit was mapped using high-resolution UAV imagery and high-resolution sequence stratigraphic analysis. The group hopes to develop and soon submit an abstract to an upcoming meeting with all students and faculty involved.

There are amazing outcrops around the coast of the island, as well as dramatic evidence of the erosive power of recent Hurricane Joaquin that hit the island in October of 2015. The class is currently in its final synthesis stage, compiling dive videos, constructing a revised geologic map, and refining their analysis of both modern and Pleistocene mapping projects. Uniform agreement between students and faculty was that the combination of land, shallow water, and deep diving observations provided an unforgettable image of an evolving carbonate platform, which meshes well with the goal of the course.