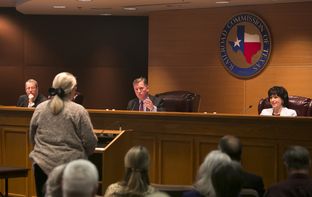 State lawmakers are considering a nearly $2.5 million plan to help answer a pressing question in some Texas communities: Why does the ground keep shaking?

An item hidden in House Speaker Joe Straus’ 991-page budget proposal would fund a “TexNet Seismic Monitoring Program,” at the University of Texas at Austin, aimed at helping Texans understand the unexpected surge of earthquakes underneath their feet.

“TexNet would create an improved statewide seismic monitoring network capable of detecting and locating earthquakes more precisely than can currently be done,” said Scott Tinker, director of the university’s Bureau of Economic Geology, which would manage the project. The program “would also improve our ability to respond to earthquakes quickly, if such a response were deemed appropriate,” he added.