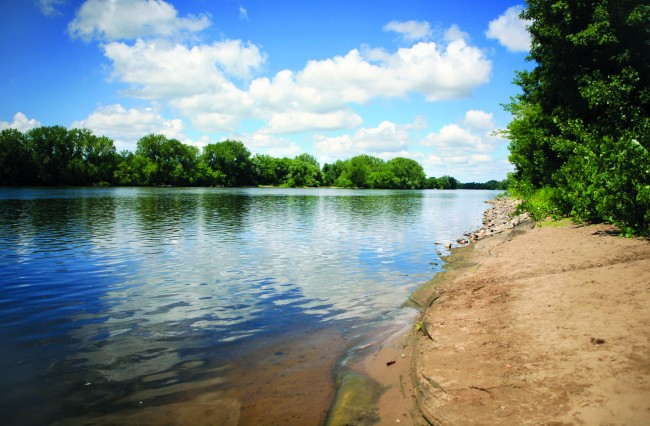 “For whatever we lose…, it’s always our self we find in the sea,”the poet E.E. Cummings once wrote. Cummings was no water-quality expert, but his line unintentionally touches upon a major environmental problem: Pollution, generated by humans on land, is washed into seas and oceans, resulting in the creation of hypoxic areas—or “dead zones”—in coastal waters around the world.

Dead zones are regions unable to sustain fish or other aquatic life. One of the largest, and most persistent, lies in the Gulf of Mexico off the Texas and Louisiana coasts, the result of pollution washed into the Gulf from the Mississippi River, which drains roughly 40 percent of the continental United States. The problem has existed for decades, despite virtually every drop of water in the gigantic Mississippi River system undergoing a natural process to filter out pollution.

Now, research published by two hydrologists from the Jackson School of Geosciences helps explain why that filtering system is not as effective as it could be. That could provide the first step in helping water-quality scientists better understand how to deal with the Gulf’s dead zone.

The research was conducted by Bayani Cardenas, associate professor of hydrogeology, and Brian Kiel, who is scheduled to complete his work for a Ph.D. in geological sciences this December. It was published in the June 2014 issue of the journal Nature Geoscience. Cardenas and Kiel studied the Mississippi River system’s effectiveness in dealing with a particular pollutant—nitrate—and its link to the Gulf’s dead zone.

Water scientists have long known the effects of nitrates on water quality. An overabundance of nitrates can supercharge the growth of algae and other aquatic plants that consume the dissolved oxygen in the water. In rivers, nitrate pollution can result in unsightly “algal blooms” on the water’s surface and, in some extreme situations, kill off fish and other aquatic life that are unable to escape to more oxygen-rich water.

Nitrates have much the same effect in Gulf coastal waters, triggering the rapid growth of free-floating algae and other single-cell organisms. As they die off, they drop to the bottom of the water, displacing live organisms that help produce dissolved oxygen. The lower oxygen levels in the water can impair the ability of some fish to reproduce. Eventually, the fish and other aquatic species swim away to more oxygen-rich zones; slower-moving species, such as clams, oysters and lobsters, begin to die off. The phenomenon is especially worrisome to commercial fisheries that work the Gulf’s coastal waters, as well as those who fish for recreation in the Gulf.

The phenomenon is not unique to the Gulf of Mexico. According to one estimate, more than 400 hypoxic regions have been documented in coastal waters worldwide. But the Gulf of Mexico’s dead zone is worrisome because of its size. By some accounts, it is the largest in the United States and second largest in the world. In summer 2013, it covered at least 5,800 square miles of sea floor—an area roughly the size of Connecticut—according to the National Center for Coastal Oceans Science, an arm of the federal National Oceanic and Atmospheric Administration.

The zone has varied in size, from 15 square miles in 1998 to 8,400 square miles in 2002. Whatever its size, it has existed for decades—shrimp trawlers reported its existence as early as 1950.

Scientists have long tied the Gulf’s dead zone to the nutrient-rich waters discharged by the Mississippi River. One factor is the sheer size of the Mississippi’s basin: Encompassing more than 1.2 million square miles, the basin includes the Ohio River and Missouri River watersheds and covers all or parts of 32 states and two Canadian provinces.

The basin also cuts across the farm belt that produces much of the nation’s agricultural produce. Farmers feed their crops with nitrate-rich fertilizers, and the cattle, hogs and other livestock excrete nitrate-rich manure. Heavy rains wash the fertilizers and manure off the land and into nearby creeks and rivers that eventually flow into the Mississippi and the Gulf of Mexico.

Like any other basin, the Mississippi has a natural buffering system that deals with water pollution. The system consists of hyporheic zones along streambeds, where groundwater and surface water mix. As the water percolates through the soil, the sediment acts as a filter to remove pollutants or initiate chemical changes that render them harmless.

The most effective hyporheic zones appear to be located in places where streams curve and bend (a quality known as sinuosity). At these locations the water spends more time percolating through the sediment, allowing more time for pollutants to be removed or neutralized. Soil composition of the sediment is also a factor: Sediments with larger or rockier grain size are more effective in filtering out pollution than sediments with finer-grained soils. However, if the sediment is too permeable, water flows through too quickly, which doesn’t allow sufficient time for the chemical reactions that reduce pollutants.

A basin the size of the Mississippi has numerous hyporheic zones to deal with pollution. Yet the persistent presence of the Gulf of Mexico’s dead zone indicates there is a problem.

The topic was a natural for Cardenas, a hydrogeologist who joined the Jackson School in 2006 and heads a research group that studies the flow and transport dynamics of natural hydrologic systems.

“I am particularly motivated by problems that cross disciplinary boundaries which require drawing ideas and approaches from different fields,” he wrote on the group’s webpage. He has authored or co-authored more than 80 papers on a variety of issues in this field.

In 2009 he published two papers on the relationship between a stream’s sinuosity and its hyporheic flow and exchange. The papers discussed a theoretical model that could be developed, but Cardenas’ model lacked input from actual conditions that could determine its effectiveness.

Enter Kiel, who as part of his graduate degree research had begun collecting data on the Mississippi basin and the ability of river systems to deal with pollution. The data from Kiel’s studies were “what my model needed,” Cardenas said.

Joining forces in 2013, the two spent more than a year analyzing data from millions of points throughout the Mississippi basin that Kiel had obtained from the U.S. Geological Survey and the Environmental Protection Agency.

The resulting computer model painted a detailed picture of how the Mississippi’s buffering system is dealing with pollution. While nearly every drop of water—99.6 percent—passes through one or more of the Mississippi’s hyporheic zones, the model found a wide variation in the time spent in the zones, from less than an hour in headwaters to more than a month in larger channels. (According to an earlier study, water must spend at least seven hours in hyporheic zones in order for the sediment to deal effectively with pollutants.)

Cardenas and Kiel determined that only about one-fourth of the zones were effective in removing or neutralizing nitrates. In the other zones, the water was not spending sufficient time for the chemical changes to take place that would remove or neutralize the nitrates. Leaving these zones, the nitrate-loaded waters continued their flow into the Mississippi River—in effect turning the river into a “conveyor belt,” as Cardenas put it, for dumping nitrates into Gulf waters.

The findings, Cardenas said, were a “disappointment” in that they illustrated the Mississippi River system’s limited ability to control the nitrates contributing to the Gulf’s dead zone.

“It will require an engineering solution, because the natural system is apparently not capable of dealing with it,” Cardenas said.

While the model is not designed to measure the amount of pollution or propose solutions, it can be a useful tool in studying water-quality issues. Cardenas said the model can be adapted to study problems with phosphorus (another nutrient that, like nitrates, can accelerate unwanted algal growth), as well as dissolved organic carbons and other pollutants.

The model can also be used to analyze other river systems. Cardenas is planning such a study on the Colorado River between Austin and Bastrop. That segment of the river experienced major pollution problems in the 1980s. Cardenas’ study will help determine how water quality has fared since the river segment was cleaned up in the early 1990s.

As the model is adapted to study the pollution problems of the Mississippi and other river basins, the results of those studies could enable water-quality experts to develop more effective solutions that prevent or control pollution. That could one day help reverse the dead zone that has plagued the Gulf of Mexico and other regions, and remove the noxious pollution—that part of “our self,” as E.E. Cummings put it—that we don’t want to find in the sea.