The Past and Future of UTIG's Oldest Industrial Group

In the center of the image rests the world as we know it: seven familiar continents; five recognizable ocean basins. Then, the timestamp at the bottom clicks back 10 million years and it all shifts ever so slightly. The Atlantic Ocean pinches closed. The Pacific gapes wider. Another 10 million years and Australia slips toward Antarctica.

Click backward another 50 million years and the ancient Tethys Ocean to the east is delineated from the massive Pacific by the spinning pieces of future southeast Asia and northern Australia.

March back another 100 million years and Pangea dissolves. The plates twist toward the south, uniting into another supercontinent. By 450 million years ago, they’ve morphed again, separating into eastern and western landmasses that both turn northward toward the equator.

Watching the animation, it’s impossible not to feel a bit theatrical, to see the Earth as a stage on which the continents dance and spin. But what underlies this mind- and land- bending choreography is geology, and it has been the focus of more than three decades of research conducted by the PLATES project at the University of Texas Institute for Geophysics (UTIG), a research unit of the Jackson School of Geosciences. 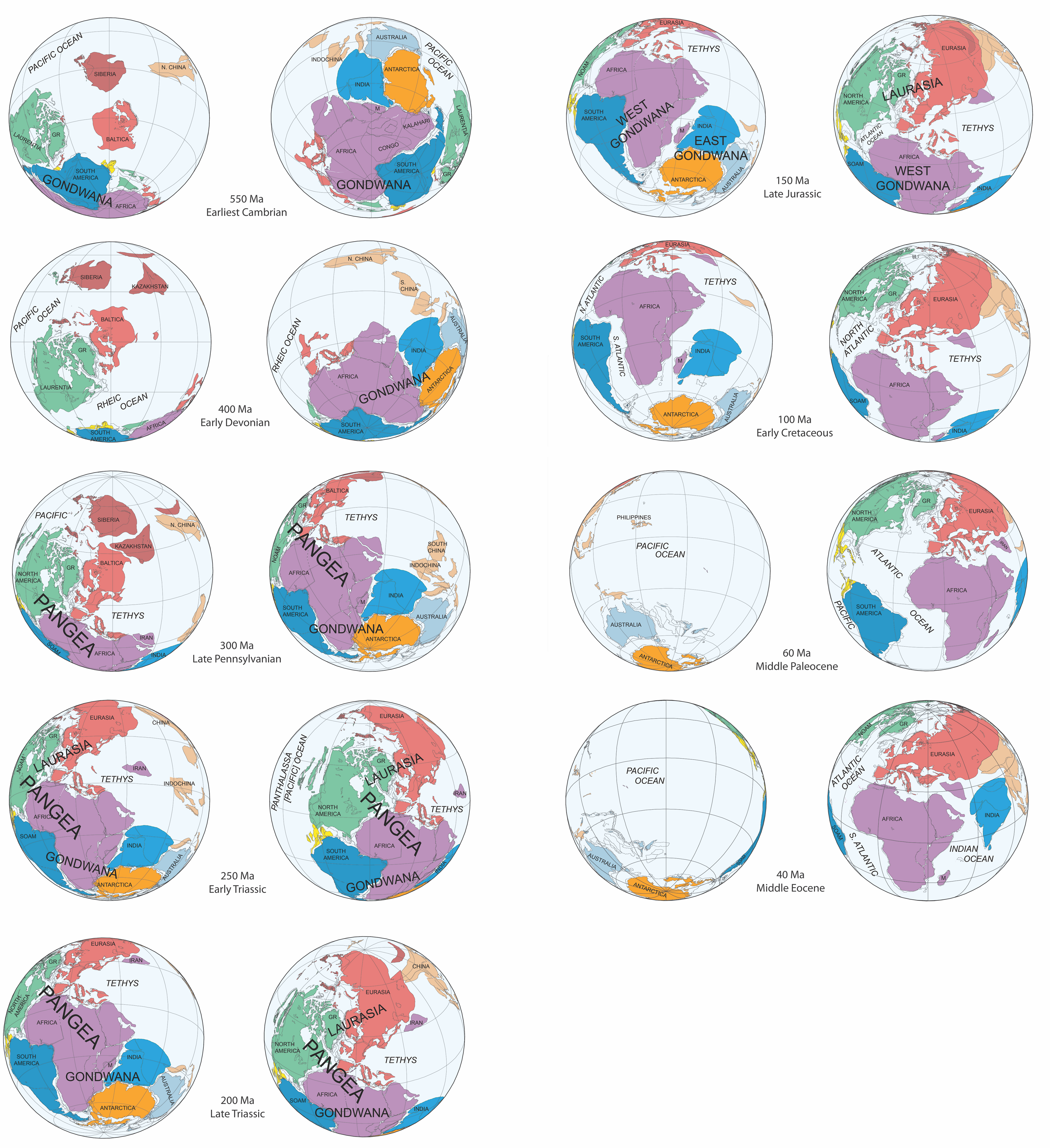 Global reconstructions showing the assembly and breakup of Earth’s supercontinents Gondwana and Pangea from half a billion years ago until today. Credit: UTIG PLATES project

Around 1983, research scientists Lawrence Lawver and Chris Scotese, with Professor John Sclater and then master’s student Lisa Gahagan, began developing the tools to map the movement of the continents by looking at the seafloor. They named the project PLATES, not because it was an acronym, Lawver said, but because it was the clearest description of the focus of the work.

Lawver, a fourth-generation Texan, grew up in northern California, well aware of the tectonic activity around him. His doctoral work at the Scripps Institution of Oceanography elucidated fault lines and heat flow in the Gulf of California.

At first, Lawver recalled, seafloor topography was measured from sensors deployed from ships moving in straight lines at sea. It was like trying to color in a page using a single crayon line every few months. With the advent of satellites, first SeaSat and then GeoSat, data could be collected in thick broad strokes, like using a wider and much faster paintbrush. The satellite coverage revealed a menagerie of topography: fracture zones, active spreading centers, abandoned spreading centers, and features that were not tectonic, like sediment drifts.

“That gave us the railroad tracks on which to reconstruct the continents,” Lawver said, “but one also needed the time basis as well.”

If the continents were trains, you needed to know where they were on the tracks at any time.

In the late 1950s scientists had discovered that the magnetic pole of Earth isn’t stable; it wobbles and repeatedly flips over time. When new rock forms, the magnetic bits of it align with the planet’s current magnetic field and are frozen in place when the rock cools. The frozen magnetic signature in any rock acts as a geologic timestamp.

For years, Lawver and Gahagan, who became an associate research scientist at UTIG after completing her master’s, collected every measurement of these magnetic anomalies that they could get their hands on. They digitized that data and slowly built a robust timetable.

Then, they put the continental plates on the tracks and built the software to show how they moved.

PLATES is UTIG’s oldest industrial consortium, with support from Exxon, Mobil, Total, Equinor, Hess, Conoco Phillips, Shell, BHP, Apache, Unocal, Chevron and BP, among others, including some companies that have now merged.

Ian Norton, who arrived at UTIG from South Africa, moved to ExxonMobil, and then joined the PLATES project in 2007. He explained that industrial groups were so supportive because PLATES helped guide exploration.

“If you find oil on one side [of an ocean basin], you are more than likely to find it on the other,” he said.

And it was more than just tectonics that industry found so valuable, he added. PLATES provided a critical database of bathymetry, earthquakes and magnetic anomalies that gave geological context to exploration. Each year for 30 years, PLATES updated their rotation files, refining the precise turns of the planet’s plates as more data became available. They also published a thick atlas of Earth’s tectonics.

Besides aiding mineral, oil and gas exploration, PLATES played a key role in basic science. Some of the most powerful advances involved illuminating the details of when and where oceanic gateways and land- based bridges opened and closed.

Ian Dalziel, whose scientific career began in Scotland, joined PLATES in 1985. For both Dalziel and Lawver, one of the highlights of the project was unraveling the genesis of Antarctic glaciation. Antarctica has been resting at the southern pole for at least the past 100 million years. Yet, as recently as 35 million years ago, birds flitted among its forests. 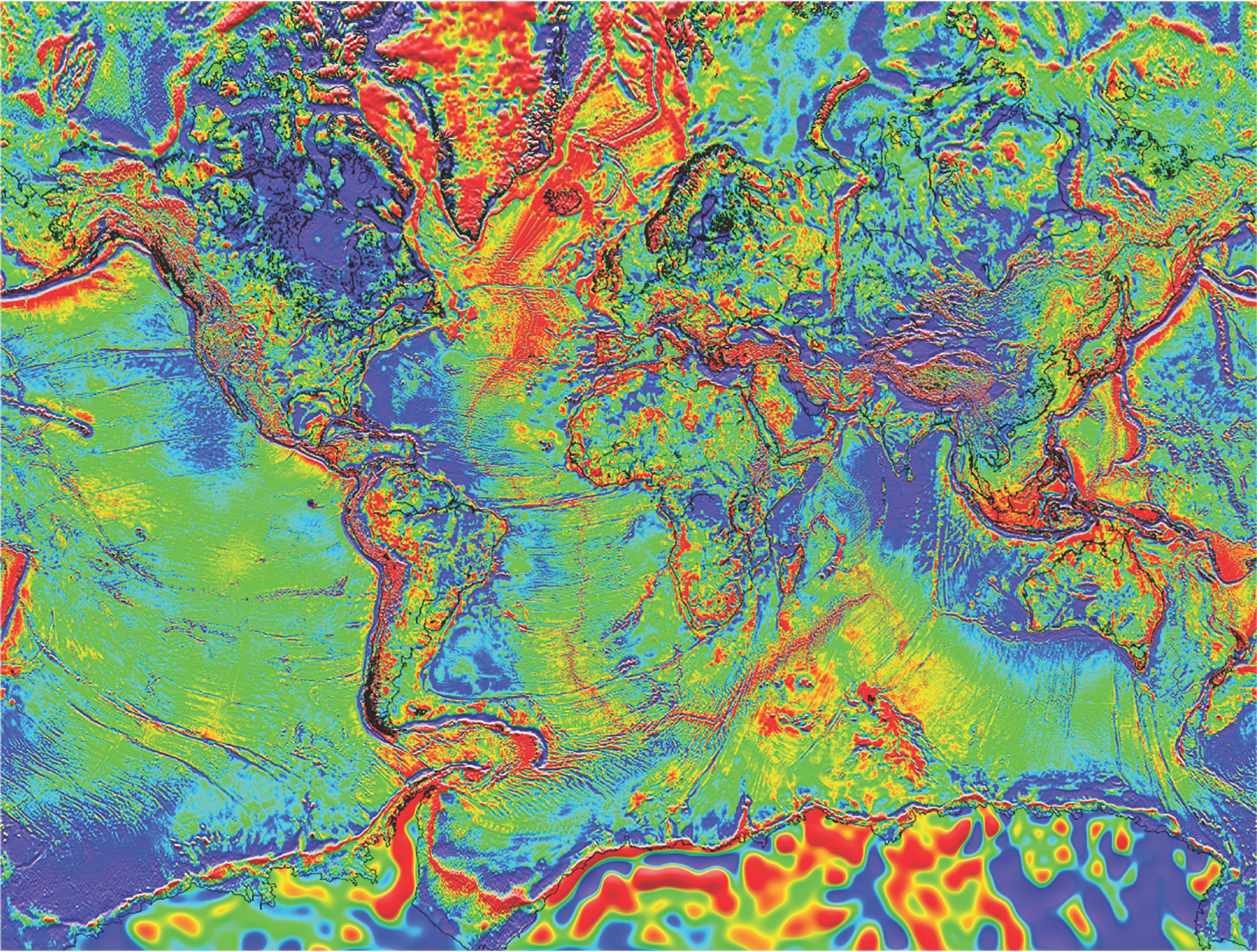 With PLATES, they showed that when Australia and South America pulled away from Antarctica 34 million years ago, a seaway opened encircling the entire southern hemisphere. Coupled with the spinning Earth, a circumpolar current began to flow, whipping up the winds, depressing temperatures and sinking the southern continent into the deep freeze of today.

Insights similarly come from understanding when continents came together, as when North America and South America collided at the isthmus of Panama just 3 million years ago. That cut off flow between the Atlantic and Pacific, allowing for the formation of the Gulf Stream and its modulating effect on the weather of Europe.

“Those gateways, which you can reconstruct using PLATES, have been very critical in the large-scale changes in Earth’s climate,” Dalziel said.

These gateways also shed light on how life moved around on the continents. Recently Lawver and Dalziel collaborated on a study trying to unravel how monkeys, which originated in Africa, arrived in South America. Differing hypotheses suggest that they traveled over a land bridge spanning the South Atlantic, or traveled from Africa through India, Madagascar, Sri Lanka and Antarctica before reaching South America.

Combined with fossil evidence, PLATES indicates the most likely route was floating on natural rafts of vegetation broken off from the Niger Delta or the Congo River. Fist-sized primates could have sailed the equatorial current across a much narrower South Atlantic Ocean in a couple of months before climbing ashore in a new world.

Using the seafloor’s magnetic anomalies as a timetable works until around 180 million years ago. But then, the tracks dead-end. Subduction destroys the older seafloor and with it the rocks’ magnetic timestamps. So, reconstructing the choreography of deeper time requires different tools: continental rocks.

Like the seafloor, continental rocks bear the magnetic imprints of their formation. The minute grains of magnetic material orient vertically downward at the magnetic north and south, horizontally at the equator, and at angles in between, depending on the latitude of the rock when it formed. But that leaves longitude a mystery. So tectonic plate reconstructions older than 180 million years require matching rock types and isotopic fingerprints across continents and then working to fit the pieces together geometrically.

Dalziel advanced this ancient work, which can be just as much art as science. He pointed out, “It’s often a matter of geologic judgment, you could almost say taste, like it or not. What is really important?”In January 1995, the cover of Scientific American sported a newly pieced together supercontinent that was 750 million years old named Rodinia. Within the pages of that issue, Dalziel wrote an article about discovering geologic signatures that support an ancient connection between the southwest United States and East Antarctica.

Accompanying graphics generated from the PLATES project show that after the breakup of Rodinia, North America traveled counterclockwise around neighboring continents like South America, as if in a game of duck-duck-goose. Here and there, the plates collide, exchanging the fragments of rock that are today’s clues to reconstructing those ancient paths. Indeed, a bit of Texas is now lodged in Argentina. 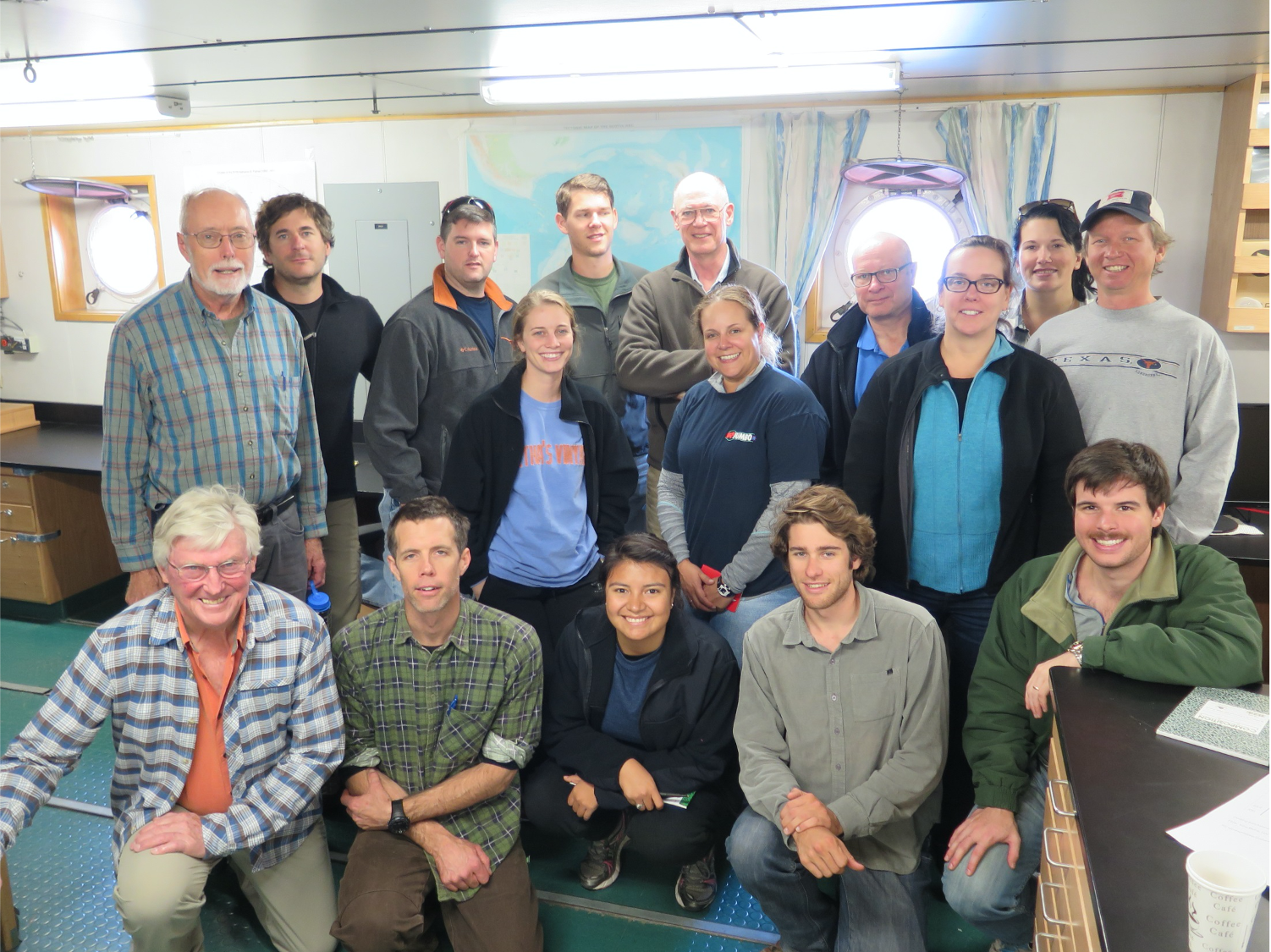 The Wide Reach of PLATES

Between 2000 and 2018, PLATES received hundreds of requests for reconstructions. More than a quarter were from colleagues at the Jackson School, but other academic institutions, television shows and museums also asked for data. The walls of the Smithsonian Institution’s Museum of Natural History and Edinburgh’s Dynamic Earth museum both have PLATES exhibitions. The “Texas through Time” animation, which superimposes the state on the North American continent as it rounds the planet, along with other educational modules, has been used by educators for years.

“One of the most interesting was in 2002,” Lawver said. “We got a request for a book in Japanese on baobab trees.”

When asked about the highlights of working on PLATES, Larry Lawver spoke of the people involved in the project. About a dozen graduate students worked on PLATES through the decades and later scattered throughout the world, carrying their expertise with them. Some have had academic success; others shifted their attention to industry. A lot of undergraduates have spent time in the lab as well.

A couple of years ago, Lisa Gahagan retired from UTIG. Soon after, Lawver also retired and was conferred the title of senior research scientist emeritus. Their retirement has brought PLATES to a transition that Dalziel, who is still active at UTIG, hopes will herald a new phase of the project.

In March 2019, Professor Thorsten Becker from UTIG proposed PLATES- 4D, a project to merge the surface tectonic movement with processes in the mantle below the Earth’s crust.

Another important change that Dalziel has been seeking since the project held a 30-year anniversary symposium in 2019 is to attract experts from other disciplines at the Jackson School, such as paleobiologist Julia Clarke, who might bring new insights on plate reconstructions.

Last year, Becker began working with a new postdoctoral fellow, Eivind Straume, to spearhead the PLATES-4D effort. Straume has already begun building ties across campus, working with Becker’s graduate student, Edward Clennett, to link plate reconstructions with the deep earth, and the Oden Institute’s Patrick Heimbach to show how plate movements could have affected climate and ocean circulation around Africa and Europe 70 million years ago when early hominids were on the rise.
“What we’ve been doing with PLATES so far is looking at three dimensions — two dimensions of the Earth’s surface and time. You usually think of four dimensions as adding time. In this case, you’re adding the fourth dimension
as depth, and that’s really the driving mechanism for plate tectonics,” said Dalziel. “A theme of the Jackson School is studying the earth as a system. And that’s exactly where it’s headed.”

Like the morphing of the continents around our planet, from one formation to the next, the PLATES program, too, is poised to morph into its next incarnation.