The stage is set for a new carbon storage economy to emerge along the Gulf Coast, according to a study led by The University of Texas at Austin, with the region offering ample opportunities to capture and store carbon, and recent state and federal incentives giving an added push to get started.

Carbon capture and storage, or CCS, is a technology that keeps CO2 out of the atmosphere by capturing emissions and storing them deep underground. It can help fight climate change by lowering industrial emissions now while renewable energy sources are being developed, said Tip Meckel, a senior research scientist at the Gulf Coast Carbon Center, a research group at the UT Bureau of Economic Geology that has been studying CCS for the past 20 years.

“This is a viable way to reduce emissions in the near term,” Meckel said. “It’s feasible and has a reasonable economic structure that can support, retain and create jobs.”

The study, which was published in Greenhouse Gases: Science and Technology, provides a high-level overview of policy incentives for CCS and how Texas and Louisiana’s high concentration of industry and unique offshore geology make the region a particularly good spot to build up a carbon storage economy.

The topics explored in the paper are especially relevant considering recent moves that Texas has made to bring carbon storage under a similar regulatory framework as oil and gas. In June, Gov. Greg Abbott signed into law HB 1284, granting the Texas Railroad Commission the same regulatory authority over CO2 injection wells as it has over oil and gas wells. In May, the Texas General Land Office announced that it was accepting lease proposals for CO2 storage sites in state land offshore of Jefferson County. Any royalties or revenues related to storage will benefit the Texas Permanent School Fund, as oil and gas activity does. 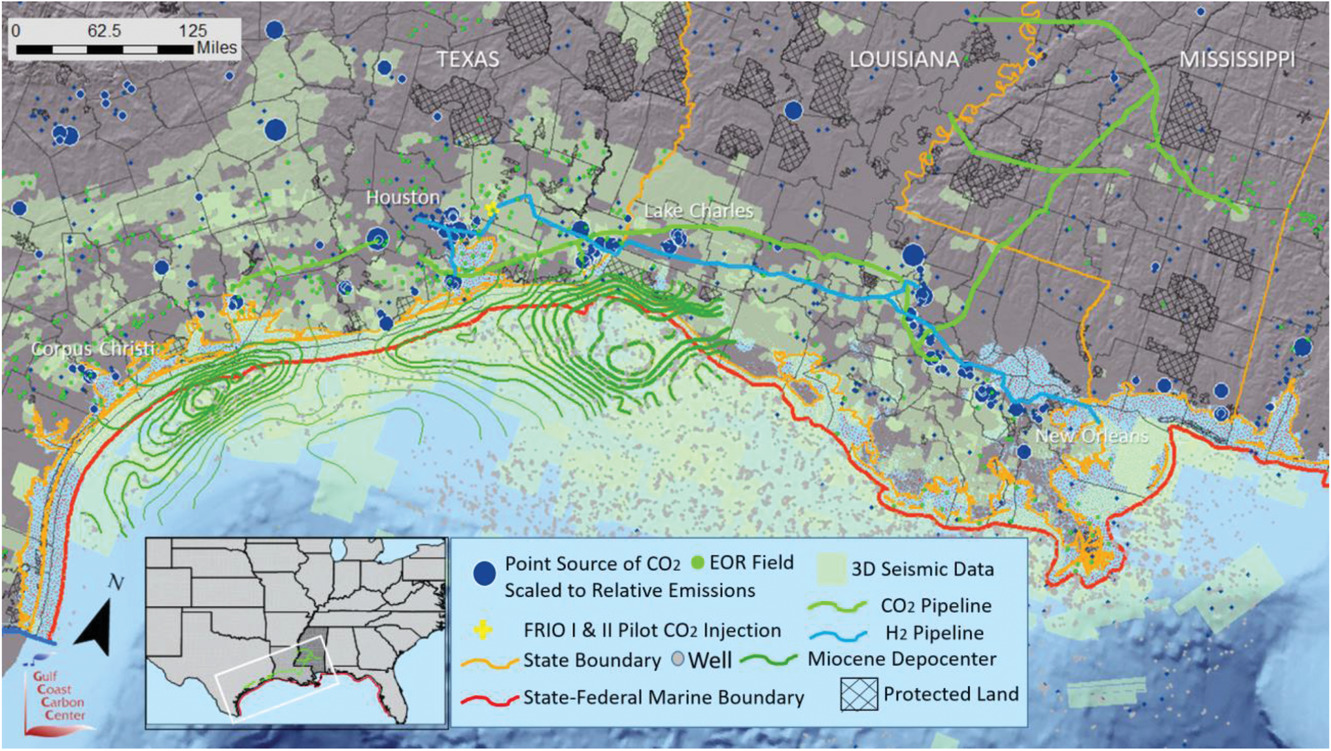 A map of Gulf Coast infrastructure that could help in developing a carbon capture and storage hub in the region, including commercial CO2 pipelines, hydrogen pipelines, and industrial CO2 emission sources. Credit: Meckel et al./ The University of Texas at Austin

In the past, oil and gas companies primarily used carbon storage and capture for enhanced oil recovery, which allows companies to get more oil out of depleted reservoirs by pumping in CO2. Enhanced oil recovery has been in use for decades and has produced an existing network of pipelines for transporting CO2 along the Gulf Coast. In addition, the two existing carbon capture facilities in Texas were built with these measures in mind.

However, the study shows that falling oil and gas prices and an increasing 45Q federal tax credit, which offsets tax liability for industries to different degrees depending on how the CO2 is stored, is making carbon storage for its own sake more attractive.

The researchers also note that in Texas, state-owned lands extend to 10.35 miles offshore instead of the usual 3.45 miles due to a law that went into effect when Texas was a sovereign nation. The historical act ends up simplifying issues of ownership and permitting today.

While geology and infrastructure of the Gulf Coast is a winning combination for boosting a carbon storage economy, the study said that another important fact is simply the amount of CO2 produced in the region. Texas has the highest level of emissions of any state. Louisiana is second.

Capture and storage offers a way to stop a portion of those emissions right at the source, Meckel said, and help flatten CO2 emissions as lower-carbon energy alternatives mature in the market.

“Advancing carbon capture and storage is something that we can do now,” Meckel said. “To take a big bite out of [the carbon] profile, you have to get going now.”

The Department of Energy funded the research.