The Triassic remains one of the most consequential and mysterious geological periods in Earth’s history.

It is a time of evolutionary change, bookended by two mass extinctions and the diversification of early dinosaurs into the wealth of forms that would rule the planet during the Jurassic.

It is also a time of environmental transformation, especially during the Late Triassic, which saw the breakup of the supercontinent Pangaea, pulses of volcanic activity, and at least three asteroid impacts — the largest being the Manicouagan impact in what is presentday Quebec.

On the regional scale, in what is now Arizona’s Petrified Forest National Park, the fossil record shows a “biotic turnover” — a shakeup in the local ecosystem that caused some species to go extinct and others to appear — happening in the middle of the Late Triassic. The timing has prompted debate about whether this turnover could be connected to broader environmental changes.

Different hypotheses have surfaced. Some think the Manicouagan impact event may have caused a sudden shift in the animal and plant community, while others point to regional tectonic events such as the rise of the Cordilleran Arc or global paleogeographic changes induced by the breakup of Pangea.

But a major barrier to evaluating these hypotheses has been the lack of a continuous geochronological timeline that can be used to improve estimates of the ages of animal and plant fossils found in the park and the timing and tempo of environmental change. Cornelia Rasmussen, a research associate at the University of Texas Institute for Geophysics (UTIG), is part of an ambitious project to fill in the gaps in the geological timeline and solve the mystery.

“If you do not understand the timing of different events, you are not able to correlate them with one another,” Rasmussen said. “Without understanding the timeline, you continue to arm wave, which can be fun, coming up with various hypotheses, but you never get around to really test them.”

She has been working on the puzzle since 2013, when, as a doctoral candidate at the University of Utah, she became a science party member of the Colorado Plateau Coring Project’s expedition to take a nearly quarter-mile-long core from Petrified Forest National Park. The core offers a continuous, unbroken stretch of Earth’s history for almost the entirety of the Triassic — including the tumultuous Late Triassic. It also preserves a geologic section called the Chinle Formation, which is known for its rich array of fossils preserved in outcrops in the national park.

“The core lets us wind the clock back to when the Petrified Forest National Park was a tropical hothouse populated by crocodile-like reptiles and turkey-size early dinosaurs,” Rasmussen said. “We can now begin to interpret changes in the fossil record, such as whether changes at the time were caused by an asteroid impact or slow geographic changes of the supercontinent drifting apart.” 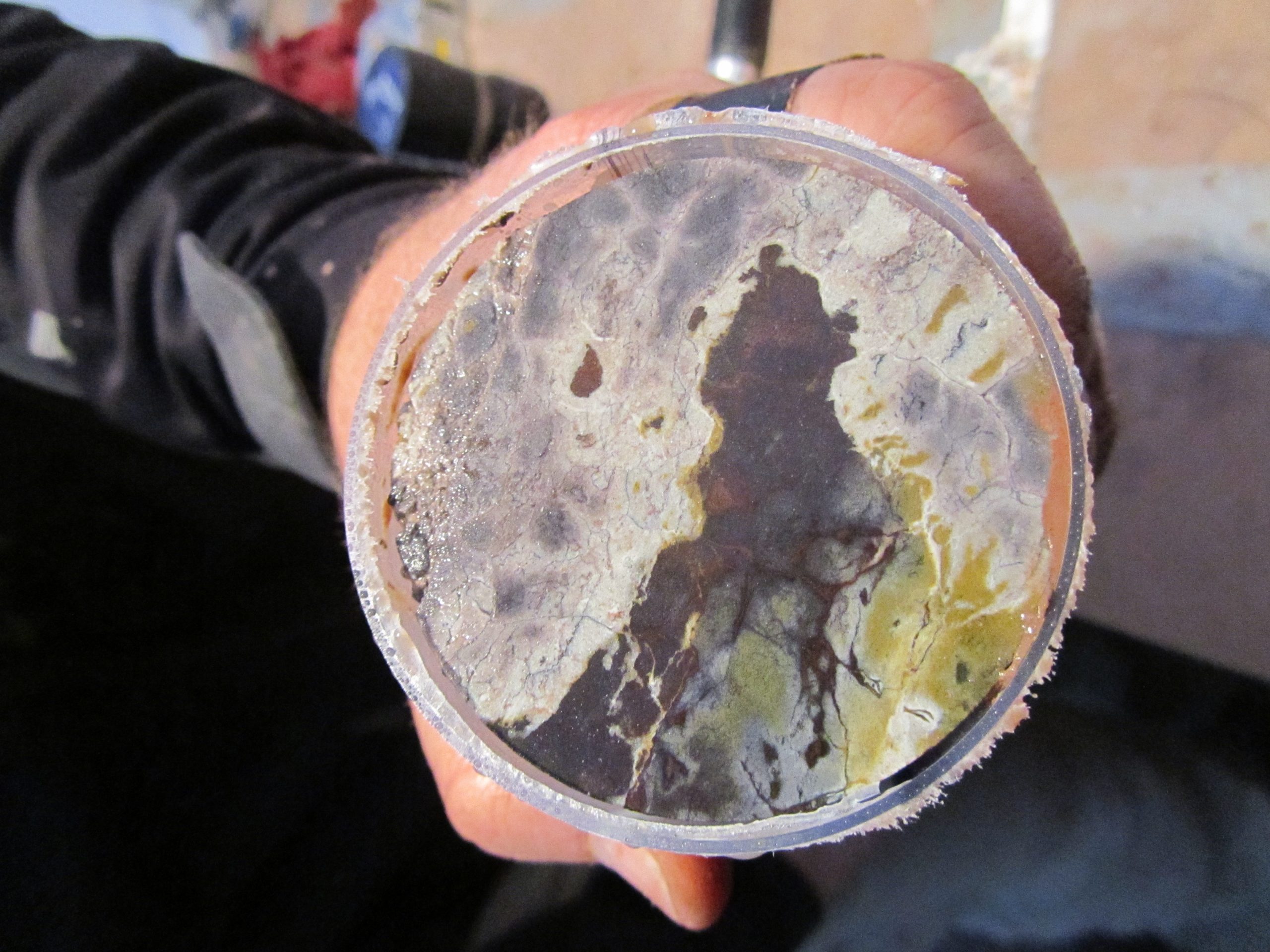 LEFT: Lake Manicouagan as seen from space. the lake fills a crater left by a meteorite impact 215.5 million years ago in what is now Quebec, Canada. RIGHT: A shot of the Triassic core. The core is helping researchers create a geochronological record that may help scientists link ecological changes recorded in the fossil record Lake: NASA. Core: Randy Irmis/Natural History Museum Of Utah.

Rasmussen is especially intrigued by the impact hypothesis. Asteroids have struck the planet many times throughout its history, but scientists have few models of their broader ecological and environmental significance. Rasmussen was part of the science team that analyzed cores taken from the crater of the Chicxulub impact, which wiped out the dinosaurs 66 million years ago. (UTIG Research Professor Sean Gulick co-led the mission to recover the core from the buried crater in the Gulf of Mexico in 2016.)

But Chicxulub isn’t representative of most impacts. The mass extinction that followed had much to do with where the asteroid landed — a continental shelf made up of sulfur-rich carbonate rocks that wreaked more havoc on the global climate than the impact itself.

By placing the Manicouagan event, which occurred 215.5 million years ago, on a geologic timeline with other events, Rasmussen said that scientists might be able to learn whether impacts with less spectacular landing sites can still have significant effects.

“We have so many impact sites that are nothing like Chicxulub,” she said.“That’s why I found this question initially very intriguing to say, ‘OK, we have a big crater but what did this crater actually do to the terrestrial environment?’” However, placing the impact and the turnover on the timeline recorded in the core’s rocks turned out to be not so straightforward.

A study led by Rasmussen and published in the Geological Society of America Bulletin in July 2020 found that the geochronologic age models for the core differ depending on the interpretation of the data analyzed in the study.

The researchers used two methods to determine ages of different core sections. The first method involved extracting tiny crystals of the mineral zircon from the core. Zircons are spewed into the sky during volcanic eruptions and, when combined with uranium-lead (U-Pb) dating, act as a time stamp for the sediments. The second method relied on magnetostratigraphy, a technique that creates a timeline based on signatures of ancient magnetism preserved in the rocks. 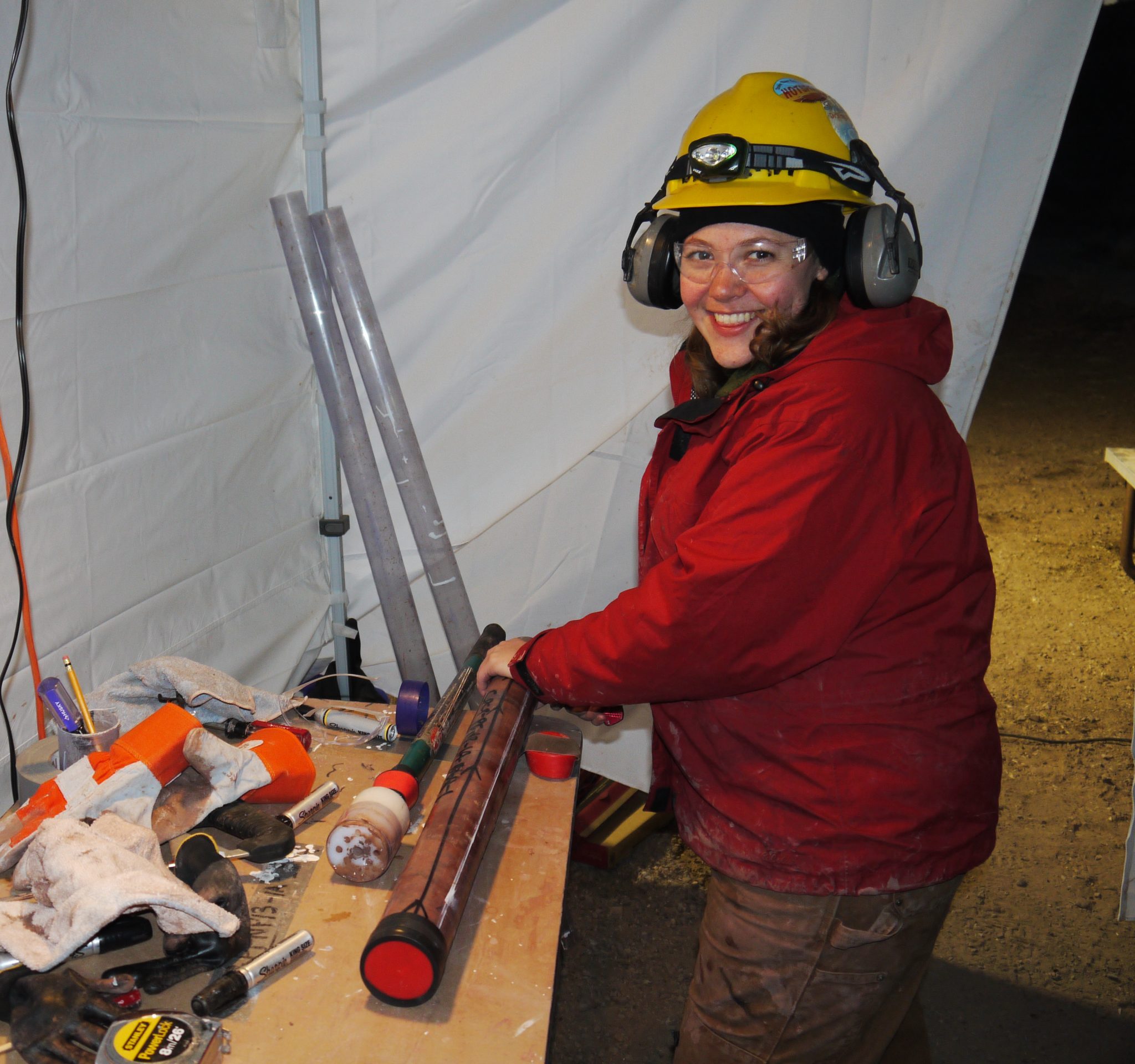 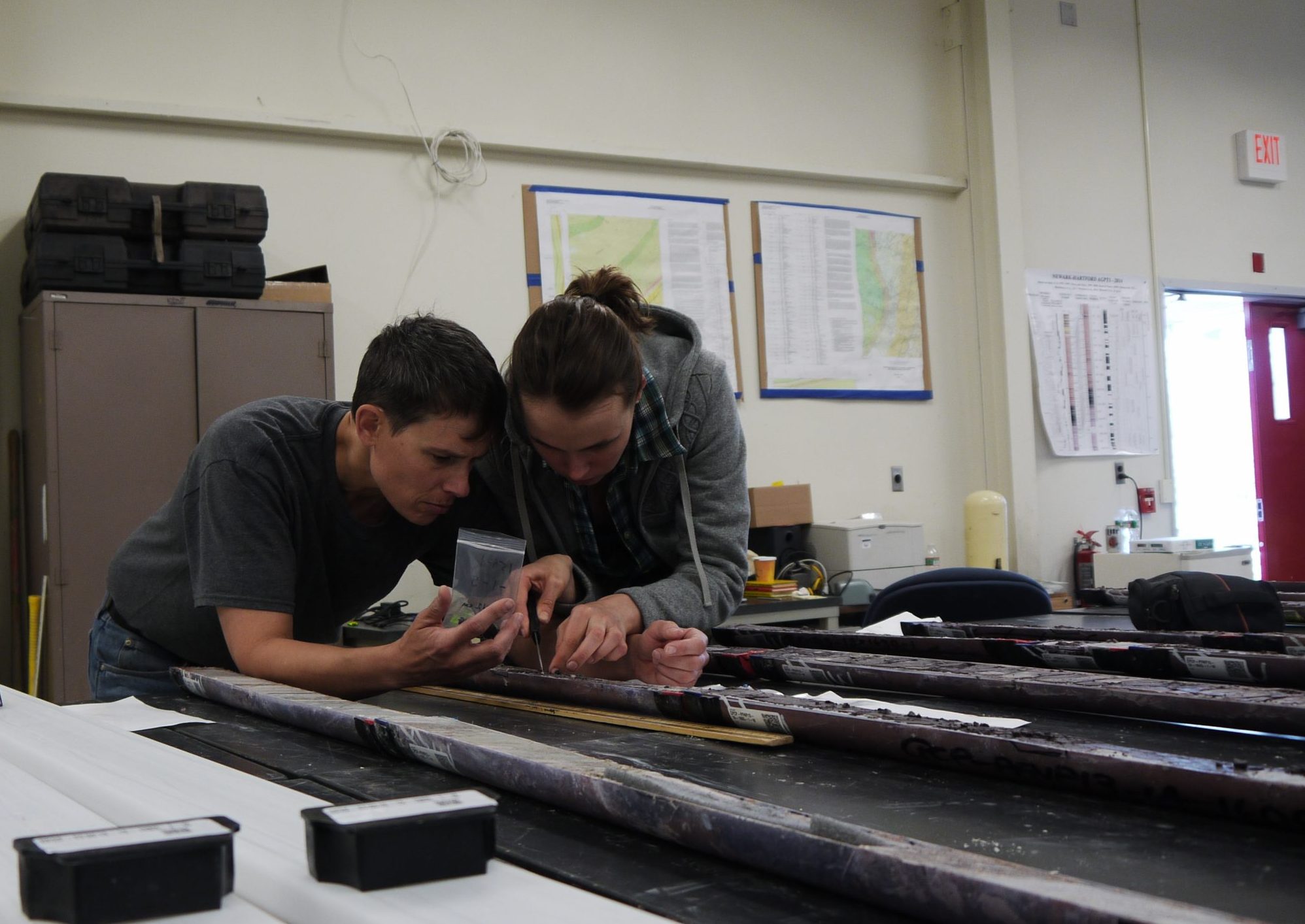 LEFT: Kristina Brady Of The National Lacustrine Core Facility preparing a core for transport at the drill site at Petrified Forest National Park in 2013. RIGHT: Rasmussen and Dominique Giesler of The University Of Arizona sampling different parts of the core for geochronologic dating and stable isotope analysis. Credit: Randy Irmis/Natural History Museum Of Utah.

Although the two models agreed in the upper half of the core, they differ in the lower half — the section that contains both the Manicouagan impact event and the biotic turnover.

The model that gave preference to the zircon U-Pb ages found that the section covering the time of the impact and the biotic turnover suffered from very low sediment accumulation, with only 4.5 meters per million years deposited. This could mean that what looks like a biotic turnover at Petrified Forest National Park could just be the result of a sediment hiatus that resulted in fewer fossils being preserved. If this is the case, it suggests that changes in flora and fauna occurred rather gradually and were not abruptly driven by the asteroid impact.

In contrast, the model that gave preference to the magnetostratigraphy found that the section was deposited much more rapidly, with an average of 34 meters of sediment per million years. In this case, the model allows for a correlation of the asteroid impact event and the biotic turnover.

Coming up with two potential answers is not ideal, but Adam Marsh, the lead paleontologist at Petrified Forest National Park, said that having two plausible hypotheses represents a great leap forward in filling in the timeline that will eventually provide a single robust answer.

“When you read [the study], first you say, ‘Well that’s a problem,’ but it’s not,” he said. “It’s going to help guide, not only future clarifying studies for this project, but also how we sample in the next core.”

Marsh was not part of the 2013 coring expedition, but he has been aware of the study since its early stages and will be part of a second coring project if and when it is funded. He is interested in the work because the park contains a rich collection of fossils from the late Triassic, but until now there was little information on the timeline because most of what scientists knew came from studying outcrops of exposed rock pushed to the surface by tectonic movements. This makes it difficult to address fundamental questions, Marsh said.

“Because we have so many fossil localities throughout the entire section, we can look at things like macroevolution and changing evolution through time, but we can’t do that if we can’t talk about time,” he said.

Marsh also provides another link between the Colorado Plateau Coring Project and the Jackson School of Geosciences. He earned a Ph.D. from the school in 2017, his master’s in 2013, and he holds an appointment as a research associate at the Jackson School Museum of Earth History. 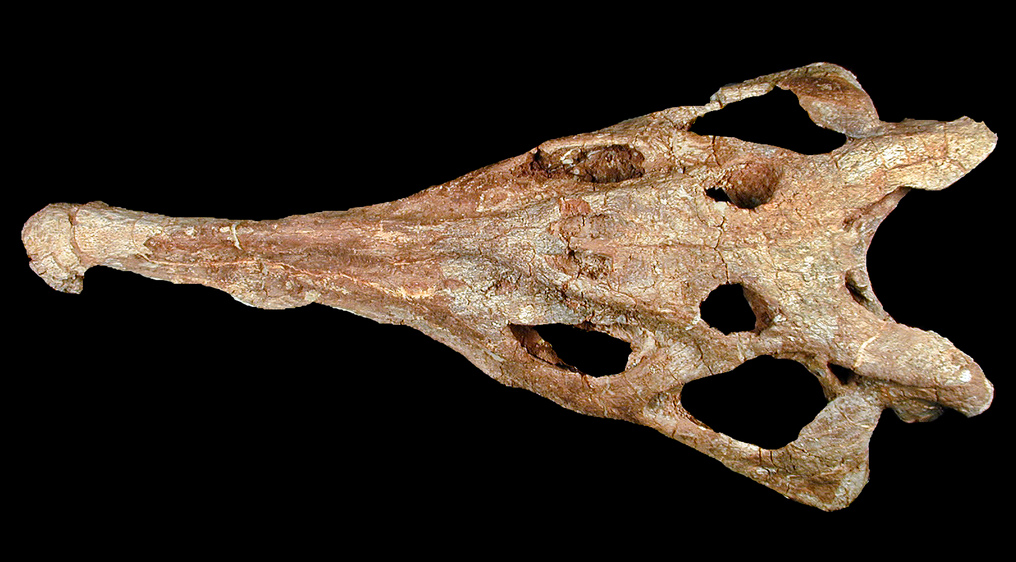 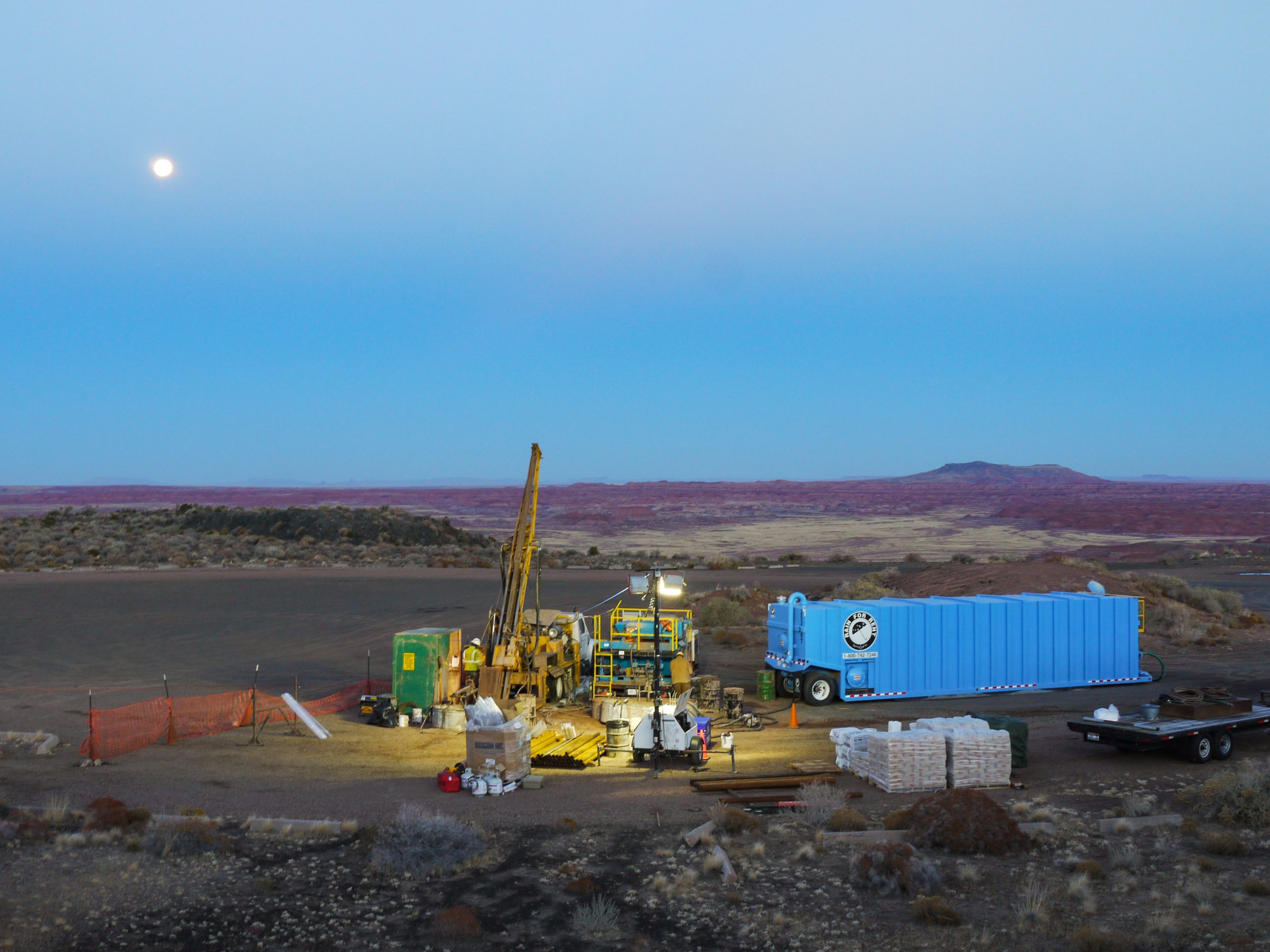 LEFT: the skull of a phytosaur, an extinct reptile that lived during the Late Triassic in what is now Petrified Forest National Park. The fossil record suggests that they were among The species that underwent a biotic turnover during the late Triassic. RIGHT: the Colorado Plateau Coring Project site at Petrified Forest National Park, near the famous Devil’s Playground section of the park. Randy Irmis/Natural History Museum Of Utah.

With the two models in hand and plenty of questions still unanswered, Rasmussen and her colleagues are continuing the work. Rasmussen has been awarded a seed grant from The University of Texas at Austin Center for Planetary Systems Habitability (CPSH) for fieldwork on outcrops in Arizona. She is also awaiting the results of age testing on a thick red silcrete layer in the lower Jim Camp Wash beds of the Sonsela Member that is used as a marker for the biotic turnover in outcrops in the park. Since the core lacks such a distinct marker of the biotic turnover, getting a precise age from the silcrete layer from outcrops could tip the scale toward one model or another.

“It’s just so fundamental, nailing down the age of this marker bed,” Rasmussen said.

The research is uncovering a detailed look at our planet’s past and the potential role played by impacts — or not — in affecting ecology and evolution. Gulick, who is the co-director of the CPSH, said that this topic is important to the center because impacts shape environments on other planets.

“Impacts are the dominant geologic process on most planetary bodies, and their effects on local and global environments are of intense interest,” Gulick said. “In particular, it’s critical to understand potential deleterious effects such as changing climate and positive effects such as creating astrobiological habitat.”

This phase would pull cores that go across the end Triassic extinction into the Jurassic and will collaborate with the Early Jurassic Earth System and Timescale program in the United Kingdom that is drilling into end Triassic and early Jurassic marine records. “Something we are missing is the correlation of the terrestrial with the marine environment and how they were affected by the same environmental changes,” Rasmussen said. “This is one of the questions that are currently being worked on and hopefully being funded in the future.”