GeoFORCE Texas Summer Academies are week-long academies which introduce our students to geological wonders throughout the United States.

Through in-class coursework and hands-on field work, students learn about the formation of the Earth and the geological processes that shape it.  The academies are led by Jackson School professors and research scientists. High school science teachers and industry professionals often help with the trips, and many GeoFORCE alumni who are now in college serve as counselors.

These hands-on experiences offer students the opportunity to learn about science in ways they simply can’t in the classroom.  They will be fascinated, awestruck, and amazed.  They will learn more than they ever expected, and they will form deep and lasting friendships.

Check out where students in the Summer Academies get to go each summer: 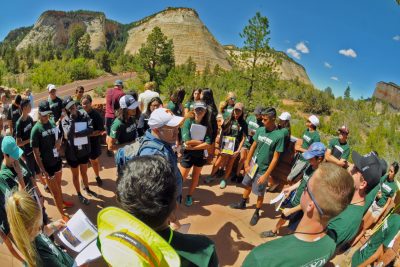 The 9th grade Summer Academy is where students are first introduced to geology as part of their GeoFORCE Texas adventure. The trip focuses on coastal processes and sedimentary environments. We begin in central Texas to take a look at river processes in places like McKinney Falls State Park.

After taking a bus to the Texas Coast, students begin their study of the geology of coastal environments. The trip includes time at Texas beaches measuring the beach profile, trenching to investigate different layers of sediment and studying longshore drift. Students also visit the Texas State Aquarium and may take a trip on a scientific research vessel. Returning home, students will be able to use their geologic knowledge and the confidence they have gained on this field trip as incoming high school freshman. 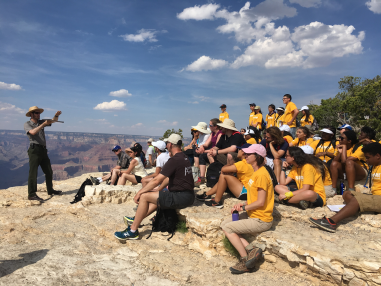 The 10th grade Summer Academy is the second year of the program.  Students have their freshman year of high school under their belt and are ready to open their eyes to the geology of the Southwest United States.

The group will fly into Las Vegas, Nevada and head to Utah, crossing into Arizona briefly on the way, meaning that students will travel to four states in a few hours.  On the trip, students encounter some of the most spectacular scenery of the United States and learn about the rocks and the processes that created them over millions of years.  The group visit Zion National Park, Glen Canyon Dam, and Grand Canyon National Park. The students get the opportunity to take a gentle raft ride down the Colorado River and an awesome hike in the Grand Canyon on the South Kaibab Trail.  The trip builds on the Coastal Texas experience by introducing a wider variety of sedimentary rocks, older rocks, and discussions of deep geologic time. 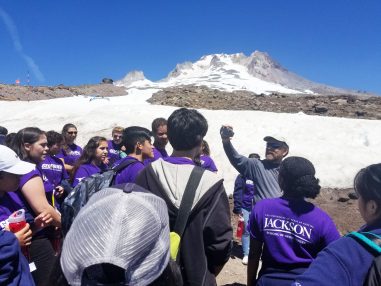 In the previous two academies, students studied carbonate rocks and coastal processes in Texas (year 1) and ancient sedimentary rocks in Arizona (year 2). In year 3, they travel to an active plate boundary to see how volcanoes and mountain ranges are formed and to compare higher-energy coastal processes with those seen on their first trip. Students will learn what causes earthquakes and will visit several active volcanoes, walk across recent lava flows, and traverse the heart of the Cascades along Lewis and Clark’s historic route to the Pacific Ocean.

Field stops include such geologically renowned places as Mt. St. Helens, Mt. Hood, the Columbia River Gorge, Crater Lake and its world-class clear blue water, and the sandy, gravelly, and rocky shores of the Pacific coast. This trip adds igneous rocks, geologic hazards, and active tectonic processes to the students’ growing geologic knowledge and prepares them for the final Academy trip to experience the complex geology of ancient rocks within the Texas Hill Country. 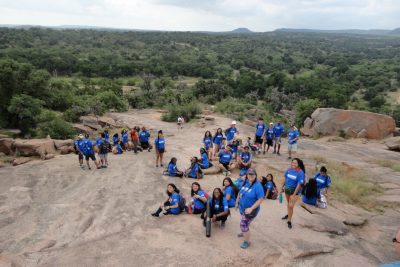 The 12th grade Summer Academy completes the GeoFORCE adventure.  Students have learned about the basic principles of geology and are ready to apply them in a more complex environment.

The final trip brings the students back to Texas, where they study the rocks of the Texas Hill Country and experience what research scientists do in the lab. The Texas Hill Country bears witness to the story of a dynamic and constantly changing Earth and reveals the existence of ancient mountains, inland seas, earthquakes, uplift, and the power of water to dissolve rocks. All of the geologic concepts studied over their previous three summers culminate with the 12th grade Summer Academy, completing a geologic education that has taken the students across the country to spectacular sites, through increasingly more complex geology.

The students will visit several points of geologic interest such as Longhorn Caverns, Pedernales Falls, Enchanted Rock, and Inks Lake. Additionally the students will complete a capstone group research project that encourages them to connect the knowledge they’ve learned throughout their summers with the GeoFORCE program.

Jackson School of Geosciences,
The University of Texas at Austin