It’s mid-March on the Texas prairie outside the city of Cameron.

Peter Flemings, a professor at the Jackson School of Geosciences, watches the rig hands lower the prototype sensor into the well. The counter still reads 1,000 feet from bottom when the thick steel cable suddenly goes slack. Moments later a dull clang echoes across the rig floor.

Ominous words, but if Flemings has learned one thing, it’s that engineering development is a slow and brutal process. With each failure, however, the team of scientists and engineers are one step closer to achieving a goal few have even attempted – reliably capturing cores of methane hydrate from beneath the seafloor and returning them to the surface at the high pressure and low temperature necessary to keep the substance stable. It’s all part of a $100 million Department of Energy funded project led by UT to study methane hydrate as a potential energy source of the future.

“We verified the latest round of design changes and revealed a problem we’d struggled with since 2017,” said research associate Steve Phillips, a co-investigator on the methane hydrates project. “With the problem isolated we can now engineer a solution.”

That’s good news and bodes well for the team as they’re preparing to return to the Gulf of Mexico for a much larger coring mission in 2022.

The mission’s goal is to drill over half a mile into the seafloor and bring back sealed cores rich in methane hydrate – an energy-dense material that forms readily along continental coastlines and beneath permafrost but is unstable on the Earth’s surface.

To prepare, Flemings and a team of Jackson School researchers oversaw the technology test at a Schlumberger-operated rig near Cameron.

The team also included UT graduate students, technical staff and postdoctoral researchers who learned first-hand how the technology works — experience that will be invaluable when they join the deepwater expedition in 2022. 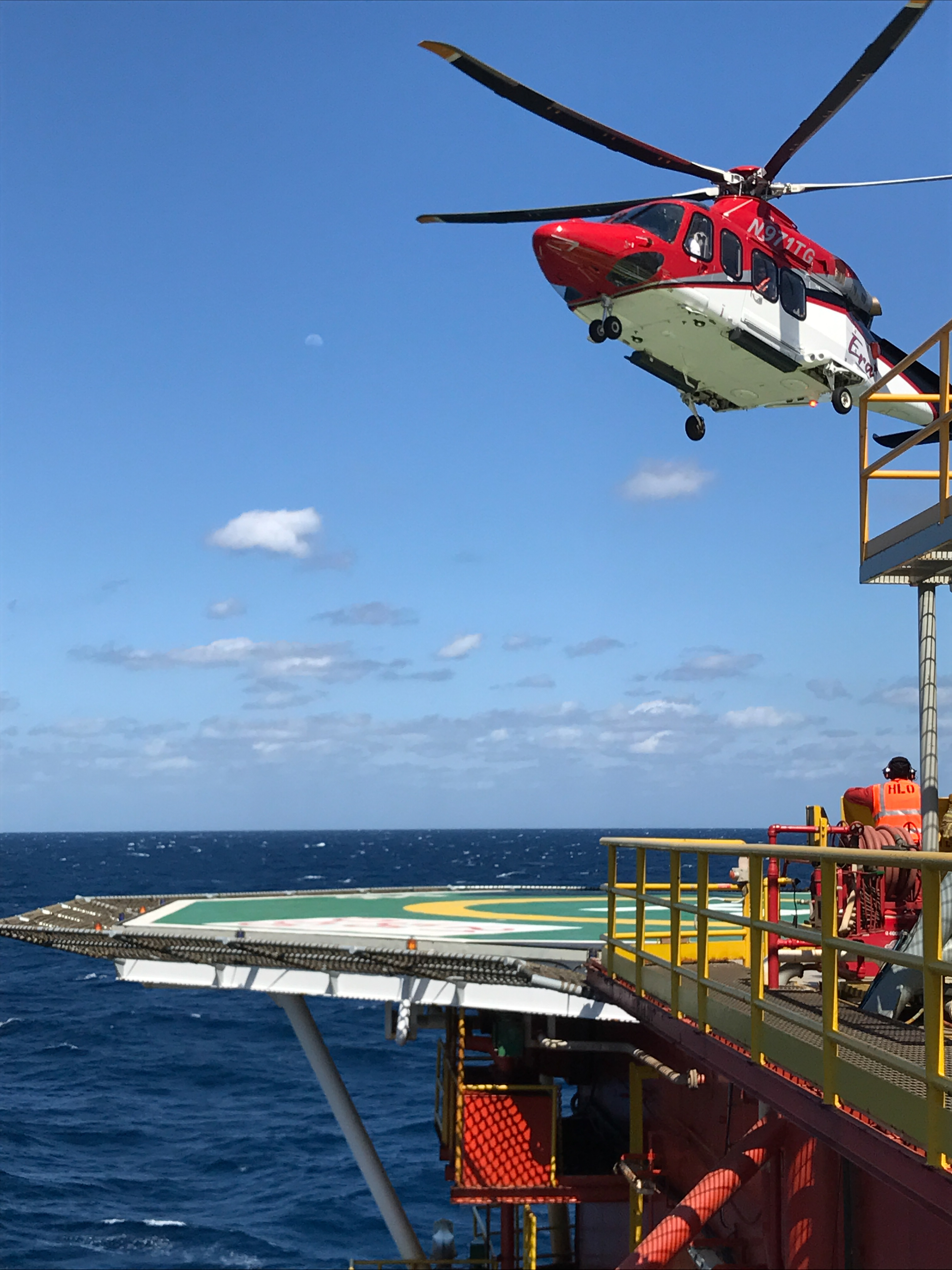 In 2017, Peter Flemings and a team of UT researchers led a mission to retrieve pressurized methane hydrate cores from the Gulf of Mexico. L) The UT team arrive by helicopter at the Helix Q4000, the Brownsville, Texas-constructed drilling rig which conducted the operation. R) Exhausted but triumphant, UTIG research scientist, Steve Phillips (back row, center), Jackson School professor, Peter Flemings (front row, second from left), and the research team at the end of the mission. Credit: Peter Flemings.

Although the tool saw moderate success in 2017, the new tests revealed that during coring, tiny rock chips could clog up the mechanism that seals the core. Despite rigorous lab tests, the problem only emerged when the tool was actually cutting into rock.

With the land test now behind them, the team has turned to experiments currently ongoing at the Jackson School’s Pressure Core Center, the only university-based facility equipped to safely store and study pressurized methane hydrate cores. Projects include a student-led experiment that will, for the first time, replicate production conditions in the lab, and an experiment simulating injecting carbon dioxide mixtures directly into hydrate reservoirs. Both experiments could play a vital role in turning methane hydrate into a future fuel while also storing greenhouse gases underground.

The group is also in the final stages of compiling a set of scientific findings from the first expedition, due to be published later this year in the first of two special bulletins from the American Association of Petroleum Geologists about UT methane hydrates research.

Lab manager Josh O’Connell and undergrad research assistant Addison Savage monitor equipment in the UT Pressure Core Center. On the left are rows of pressure cores retrieved from the Gulf of Mexico in 2017.

With two years to go until the next marine expedition, the group still has work to do. At the top of the to-do list is the drilling permit, which will require coordination and effort at all levels of The University of Texas at Austin’s administration, including the president’s office. The team also needs to secure a drilling vessel and hire the personnel required to run a two-month deepwater drilling operation. Fortunately, one of the biggest hurdles, the expedition’s science plan, is now complete.

Unlike the 2017 expedition, which brought back 20 pressurized cores from a single hydrate deposit in the northern Gulf of Mexico, the plan for the second expedition calls for at least 50 cores from two different reservoir types, totaling 500 feet of carefully sealed methane hydrate cores. Studying different types of reservoirs will give a much clearer picture of how the deposits form, and how they could be put to use.

The researchers are also planning on learning more about the methane-producing microbes that feed the reservoirs by taking hundreds of feet of conventional samples, and by deploying a newly developed instrument that measures temperature and pressure within the sandy reservoirs where methane hydrates accumulate, something never done before.

The data will answer fundamental questions about the source of the methane and how it moves through the Earth’s subsurface, squeezing through tiny gaps and fractures in the rock to form hydrate reservoirs.

Phillips said that with the science plan set, the team feels well prepared to tackle the final phase before the expedition. He added that being in the front seat of pioneering potentially world-changing science is a really great place to be.