NEW RESEARCH IS REDEFINING INTERACTIONS BETWEEN GEOLOGY AND THE WATER CYCLE

By Anton Caputo and Monica Kortsha

You can’t squeeze water from stones. But tree roots can tap them. It’s a phenomenon that has been documented for more than a century and one that’s easy to observe. We have all seen seemingly thriving trees perched on rocky outcrops.

The scene is mostly treated as a curiosity in the scientific community, with soil being accepted as the de facto source of water for most trees.

But emerging science being spearheaded by researchers at the Jackson School of Geosciences is painting a different picture. Using remote sensing and on-the-ground fieldwork, scientists are finding that trees are routinely accessing significant amounts of water stored in bedrock. This is happening across diverse climates and biomes throughout the continental United

States and, probably, the world. What’s more, the trees are turning to water in bedrock more frequently than scientists previously thought, with data showing that they use it as a regular source of water, not just an emergency reserve.

It’s a paradigm shifting finding that overturns long-held assumptions about where trees get their water.

Scientists say the dynamic seems to be particularly important in some drought- prone areas of the country such as California and Texas.

The science also demonstrates the need to account for rock moisture — the water clinging to cracks and pores in otherwise dry underground rocks — when making predictions about how forests will respond to climate change.

“[Rock moisture] is a critical part of the water supply for plants and trees,” said Daniella Rempe, an assistant professor at the Jackson School who is leading research on rock moisture in the environment and co-authored a study offering the first estimate of how frequently forests tap bedrock across the continental United States. “This impacts a number of fields in the earth sciences. We need to start incorporating this water into our conceptual models.”

The study was published in Nature in September 2021. It was led by Jackson School undergraduate Erica McCormick, who graduated with a bachelor’s degree in geology in 2020 but stayed on as a research assistant in Rempe’s lab during the COVID-19 pandemic while she waited to travel to Australia to pursue a Ph.D.

The researchers found that trees tapping bedrock is far from rare: It’s happening across the country, with the scientists detecting the behavior in about 24% of forests and shrubland — an area greater than the size of Texas — during the 14-year study period of 2003-2017, about 36% of trees tapped into bedrock every year. 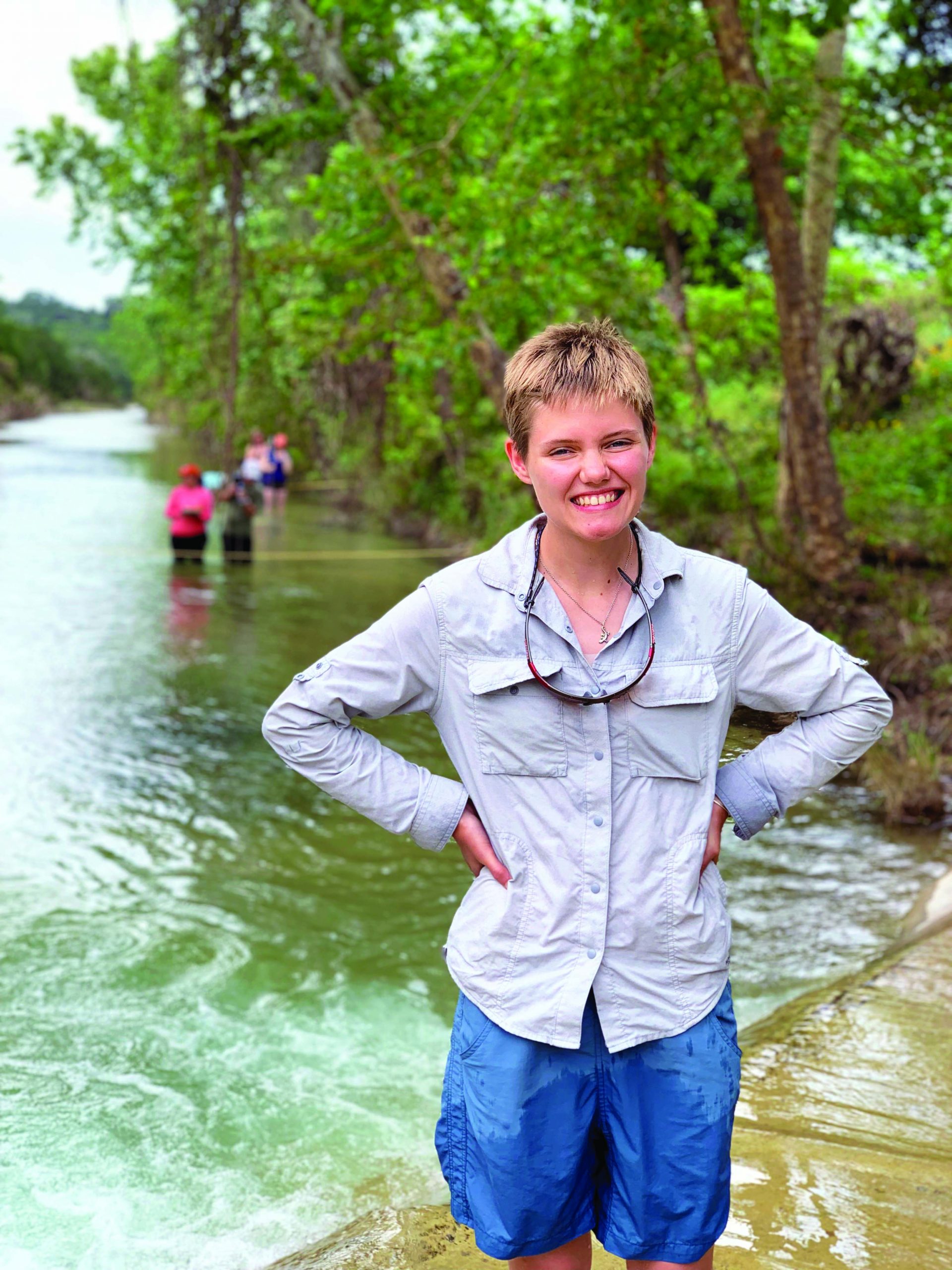 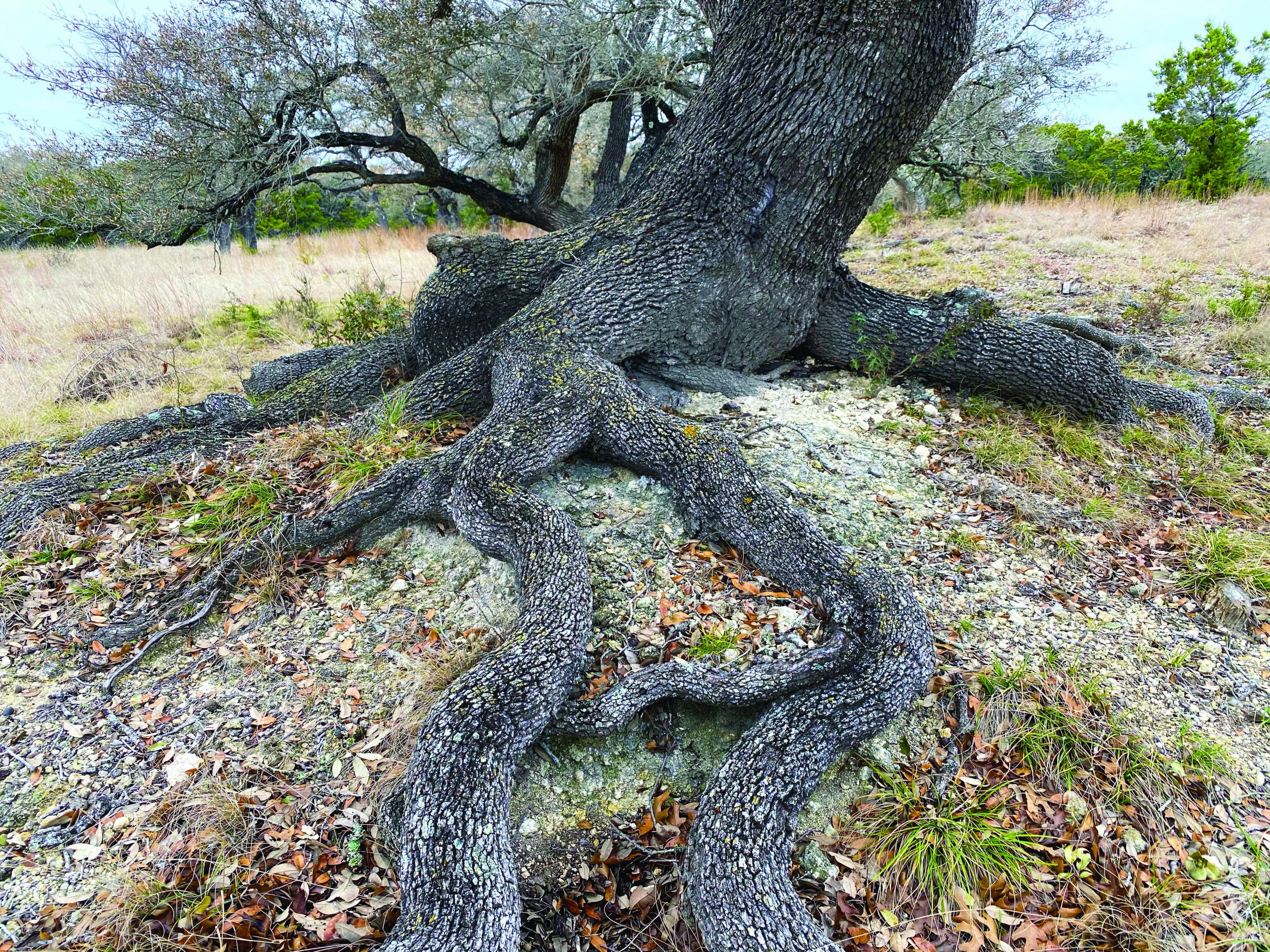 To Rempe, finally putting numbers to a phenomenon that everyone suspected was happening to some degree is a big first step in the emerging research. But she’s most proud of the fact that the notable finding was possible only because of the research — both in the field and with data sets — of Jackson School students and postdocs. Co-authors include Jackson School graduate students Alison Tune and Logan Schmidt and research associate Dana Chadwick. David Dralle, a research hydrologist with the U.S. Forest Service, and Jesse Hahm, an assistant professor at Simon Fraser University and former Jackson School postdoc, were also part of the team.

Little pieces of the project were attacked by different lab group members over the years, but it didn’t come together until Erica combined her extensive literature review with a new method for estimating water storage,” Rempe said. “It’s a big accomplishment for the group.”

McCormick and the team used a combination of public data sets that track precipitation, soil depth and water storage, snow cover and evapotranspiration (the amount of water evaporating from the land surface and transpiring from plants) in forests across the country. They concentrated on areas with shallow bedrock (less than 1.5 meters underground) and eliminated all areas that offered another source of water to trees aside from bedrock and soil, like a nearby stream. The remote sensing data came from satellites. The scientists also compared the results with ground measurements taken in past studies from sites in Texas and California.

What they found was that the numbers didn’t add up. There simply wasn’t enough water in the soil

in many places to account for the amount of moisture being released into the atmosphere through evapotranspiration.     Moisture from bedrock had to be making up the difference — which could be

significant. The researchers found that forests in California alone take up about 16.2 million acre-feet of rock moisture each year, a volume about equal to the storage capacity of all the state’s human-made reservoirs and nearly three times that of the state’s annual domestic water use.

McCormick said the study’s results should be a wakeup call for hydrologists and others trying to predict and manage water supplies.

“If you are trying to figure out how much water there will be in a stream at the end of summer, how much water will actually recharge groundwater when it rains, you have to account for where water gets stored,” she said. “By assuming that trees are just using soil, you could be missing a huge component.”

Rempe has already demonstrated how important rock moisture can be for forests facing drought. In a 2018 study, she found evidence that rock moisture helped trees at field sites in Northern California survive a severe drought that killed 100 million trees across the state from 2010 to 2015. As climate change is expected to intensify both rain and drought, getting a handle on the storage capacity of rock moisture in bedrock and how much trees depend on it is important for projecting the long-term fate of forests, Rempe said.

“We have conceptual models for how the subsurface impacts a plant community, but we don’t have the volumes and the timescales of this reservoir to incorporate into our predictions,” she said.

The latest study is an important first step in that regard. However, the researchers were very conservative with their this point the researchers only definitively say trees are methods, Rempe said. They excluded all areas where spotty data or uncertain sources of water could muddy the numbers. And at using rock moisture in areas where annual rainfall did not cover the amount of water evapotranspired from a forest in a year. 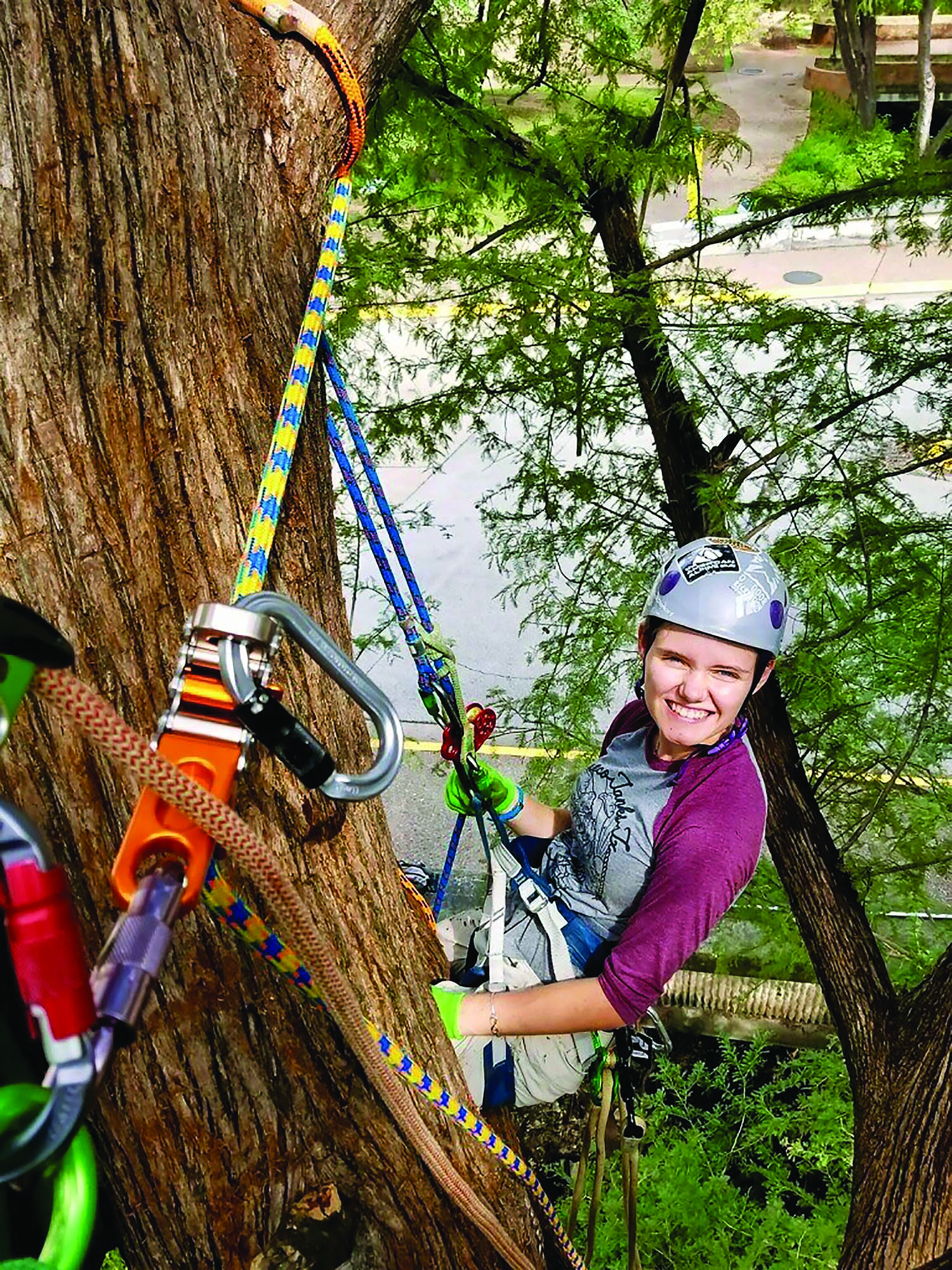 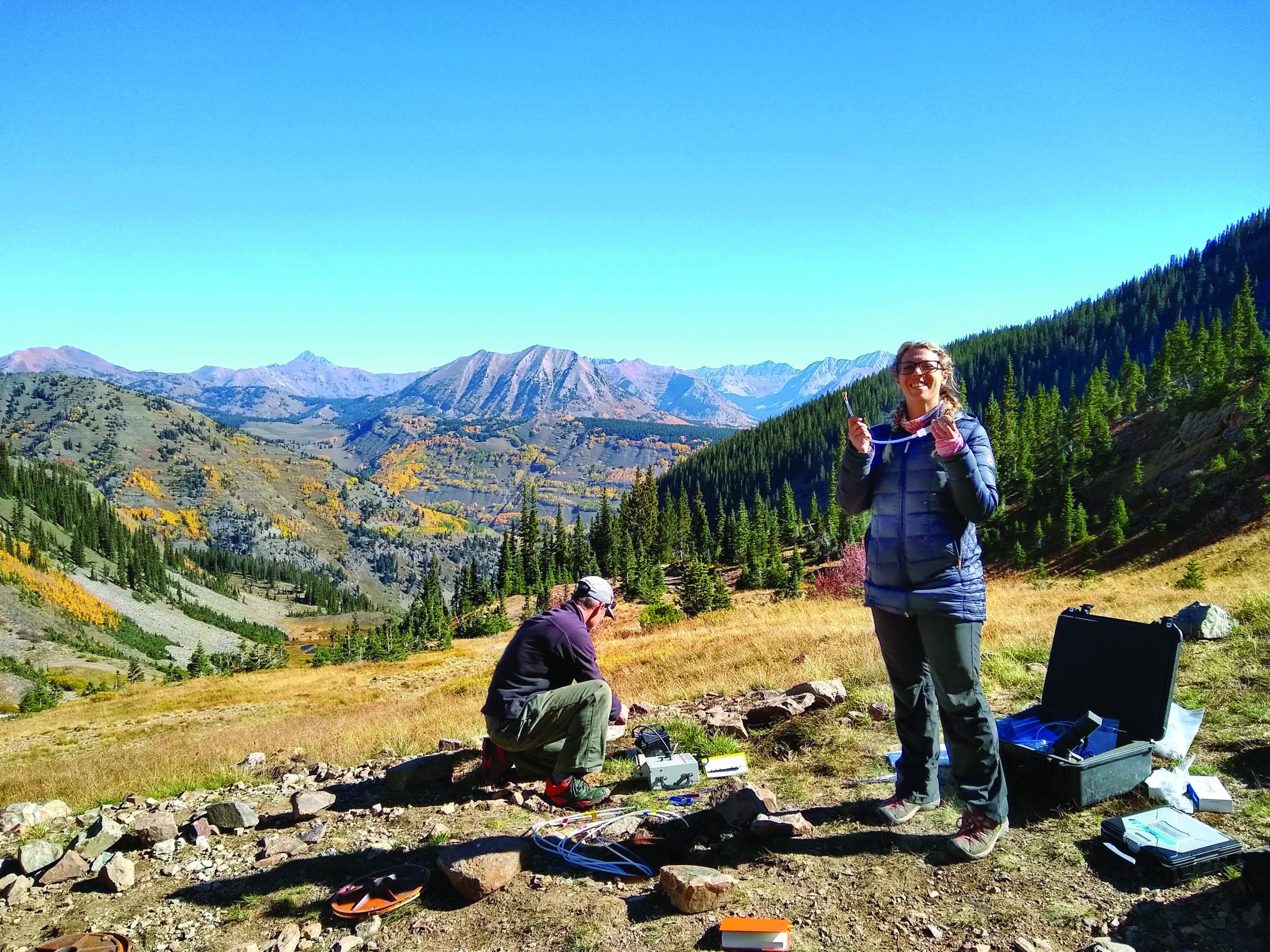 This approach means that the countrywide estimates presented in the study are the bare minimum. Rempe said she estimates that the actual extent of trees tapping into bedrock and the volumes accessed could be double what was reported.

At most of these sites, the rocks held significantly more water than soil — up to 10 times as much. To Susan Schwinning, a professor of plant ecology at Texas State University who was not involved with the research, the study is a huge leap in knowledge, proving what was once thought to be odd behavior to be essential.

“It’s taken 100 years to come from this anecdotal evidence — ‘oh, wow, tree roots can actually go that deep’ — to understanding that this is probably, in many places, an important part of defining ecosystem dynamics,” she said. “If you’re working in climate change research or earth system sciences, you will have to think seriously now about how to modify models.”

The future of the research is wide open. The study area was limited to the continental United States, but the researchers are confident the findings are applicable in other parts of the world.

McCormick spent nearly two years of her undergraduate work conducting the literature review for the paper, which led researchers to conclude that, in general, whenever trees can put roots down into bedrock, they do. The study cites 65 papers, but she pored over about 300 spanning more than a century, looking for any mentions of tree roots tapping bedrock. What she found was evidence of trees tapping bedrock from a wide assortment of publications, covering nearly every type of environment and documented on five continents.

“Most of the papers I have read were about something totally different like avalanches or something, and I’d be looking for that one sentence to see if they mention if a root was in a rock,” she said. “It was a lot of work.”

McCormick is going to pursue a Ph.D. and plans to continue the work in graduate school as she tries to emulate her mentor.

“My goal is to be a mini-Daniella someday,” she said. “I want to be a professor.”

Rempe wants to continue to take the work into the field in Texas, Colorado and California. This will probably provide some great opportunities for students to do fieldwork and, in some cases, not that far from campus. Rempe said that the monitoring program being set up at the White Family Outdoor Learning Center — a 267-acre Hill Country ranch donated by Leslie P. and Dianne White that the Jackson School is using as part of its Texas Observatory network — is a perfect spot for some of the research. Her group has already documented plants and trees drawing significant amounts of water from bedrock at the site and hopes to document how different Texas trees compete for this deep resource. Rempe has already tried tracking the water from rocks to trees by injecting isotopic tracers into the bedrock at a site in California and plans to do the same at the White Family Outdoor Learning Center soon. Her pilot experiment in California failed because her team underestimated how much water trees were using from bedrock, and the tracer was not strong enough. She was recently awarded funding from the National Science Foundation to try again with a stronger tracer label.

The idea is to start putting a finer point on how bedrock water and trees interact, and what that means for the wider environment.

“We’ve literally barely scratched the surface when it comes to understanding water storage,” she said. “As the West and Southwest are predicted to experience more prolonged drought, this deeper storage will be important to understand.”