During the Great Depression, some unemployed Texans were put to work as fossil hunters. The workers retrieved tens of thousands of specimens that have been studied in small bits and pieces while stored in the state collections of The University of Texas at Austin for the past 80 years.

Now, decades after they were first collected, a UT researcher has studied and identified an extensive collection of fossils from dig sites near Beeville, Texas, and found that the fauna make up a veritable “Texas Serengeti” – with specimens including elephant-like animals, rhinos, alligators, antelopes, camels, 12 types of horses and several species of carnivores. In total, the fossil trove contains nearly 4,000 specimens representing 50 animal species, all of which roamed the Texas Gulf Coast 11 million to 12 million years ago.

A paper describing these fossils, their collection history and geologic setting was published April 11 in the journal Palaeontologia Electronica.

“It’s the most representative collection of life from this time period of Earth history along the Texas Coastal Plain,” said Steven May, the research associate at the UT Jackson School of Geosciences who studied the fossils and authored the paper.

In addition to shedding light on the inhabitants of an ancient Texas ecosystem, the collection is also valuable because of its fossil firsts. They include a new genus of gomphothere, an extinct relative of elephants with a shovel-like lower jaw, and the oldest fossils of the American alligator and an extinct relative of modern dogs.

The fossils came into the university’s collection as part of the State-Wide Paleontologic-Mineralogic Survey that was funded by the Works Progress Administration (WPA), a federal agency that provided work to millions of Americans during the Great Depression. From 1939 to 1941, the agency partnered with the UT Bureau of Economic Geology, which supervised the work and organized field units for collecting fossils and minerals across the state. 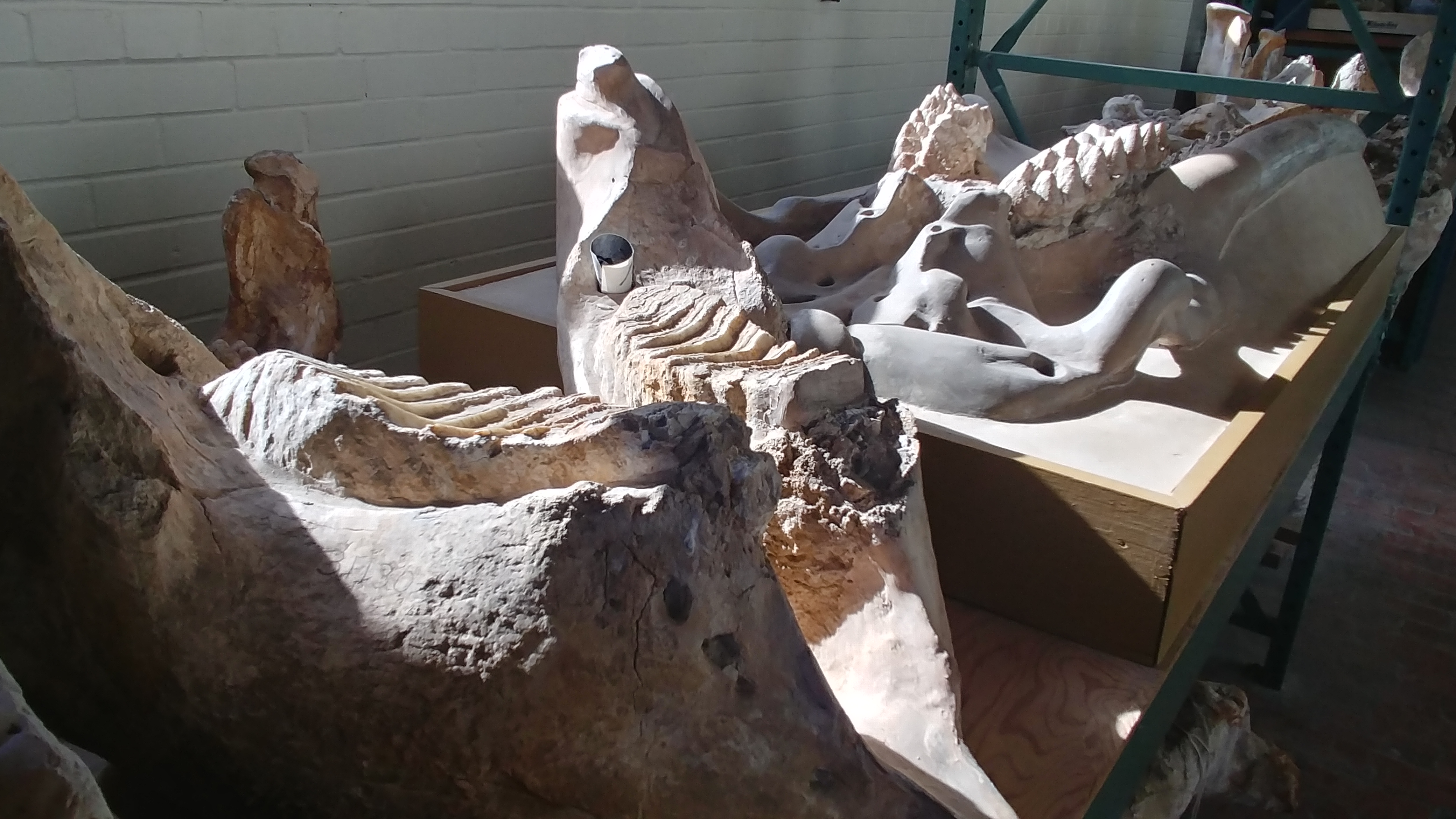 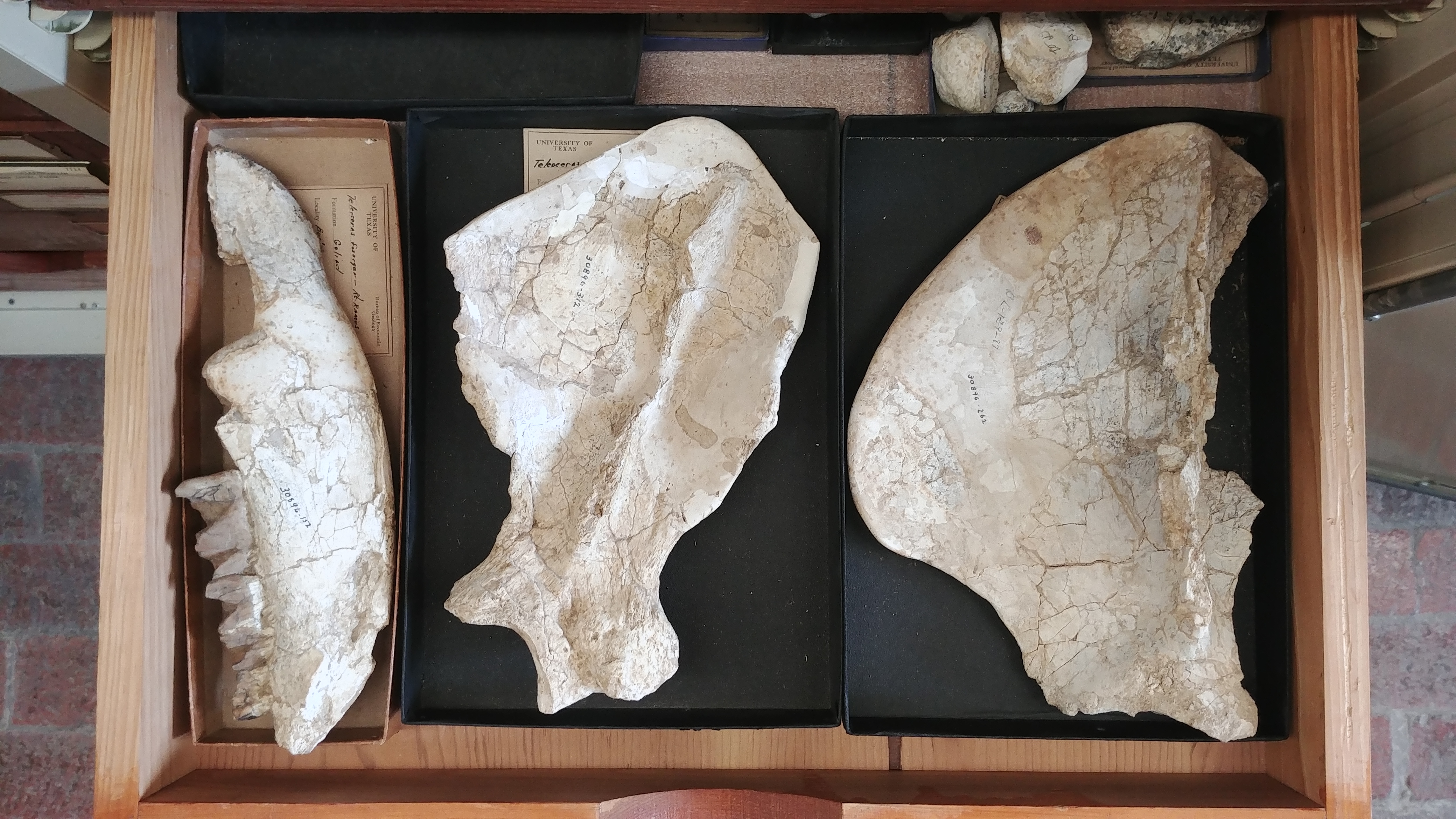 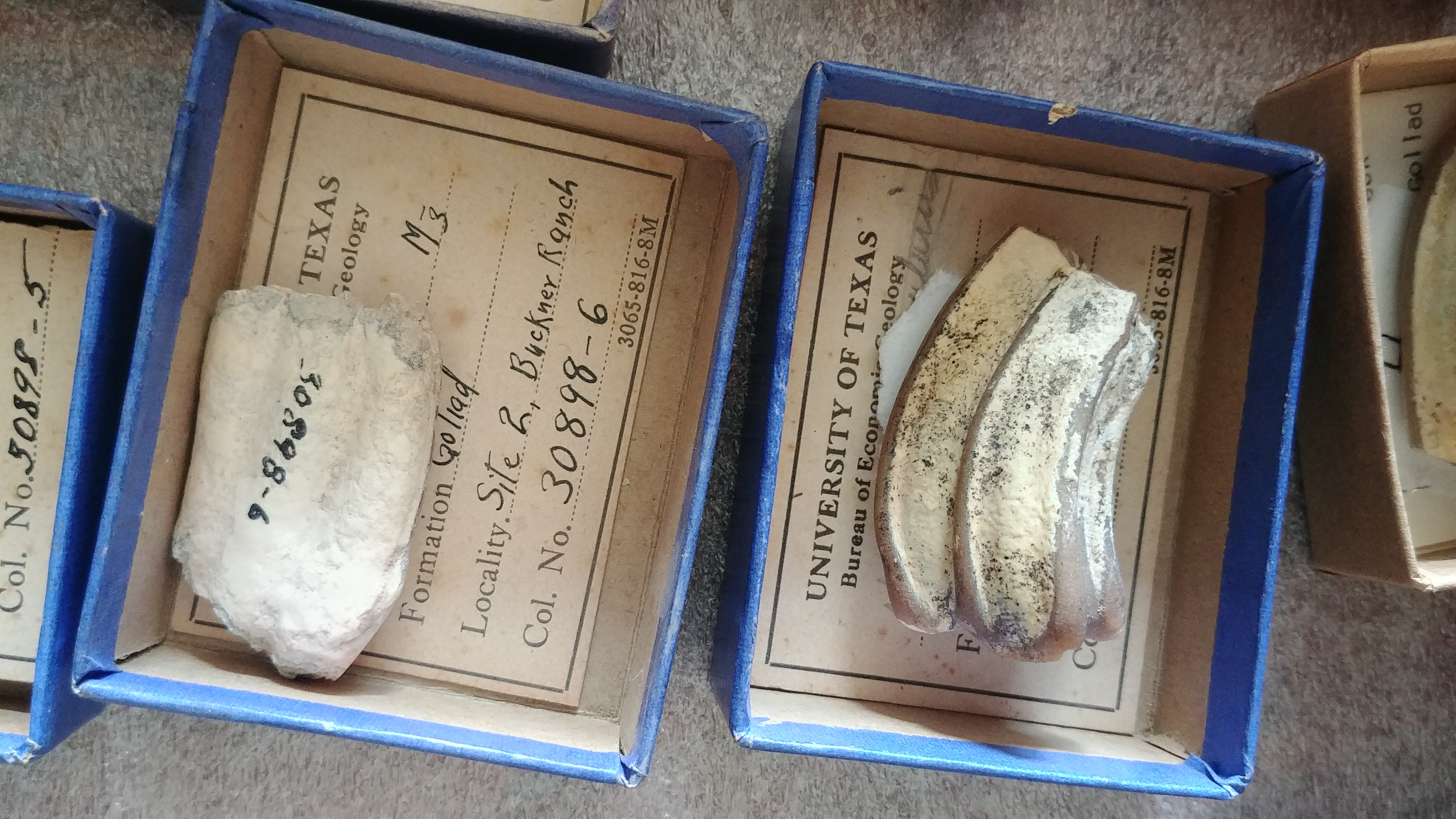 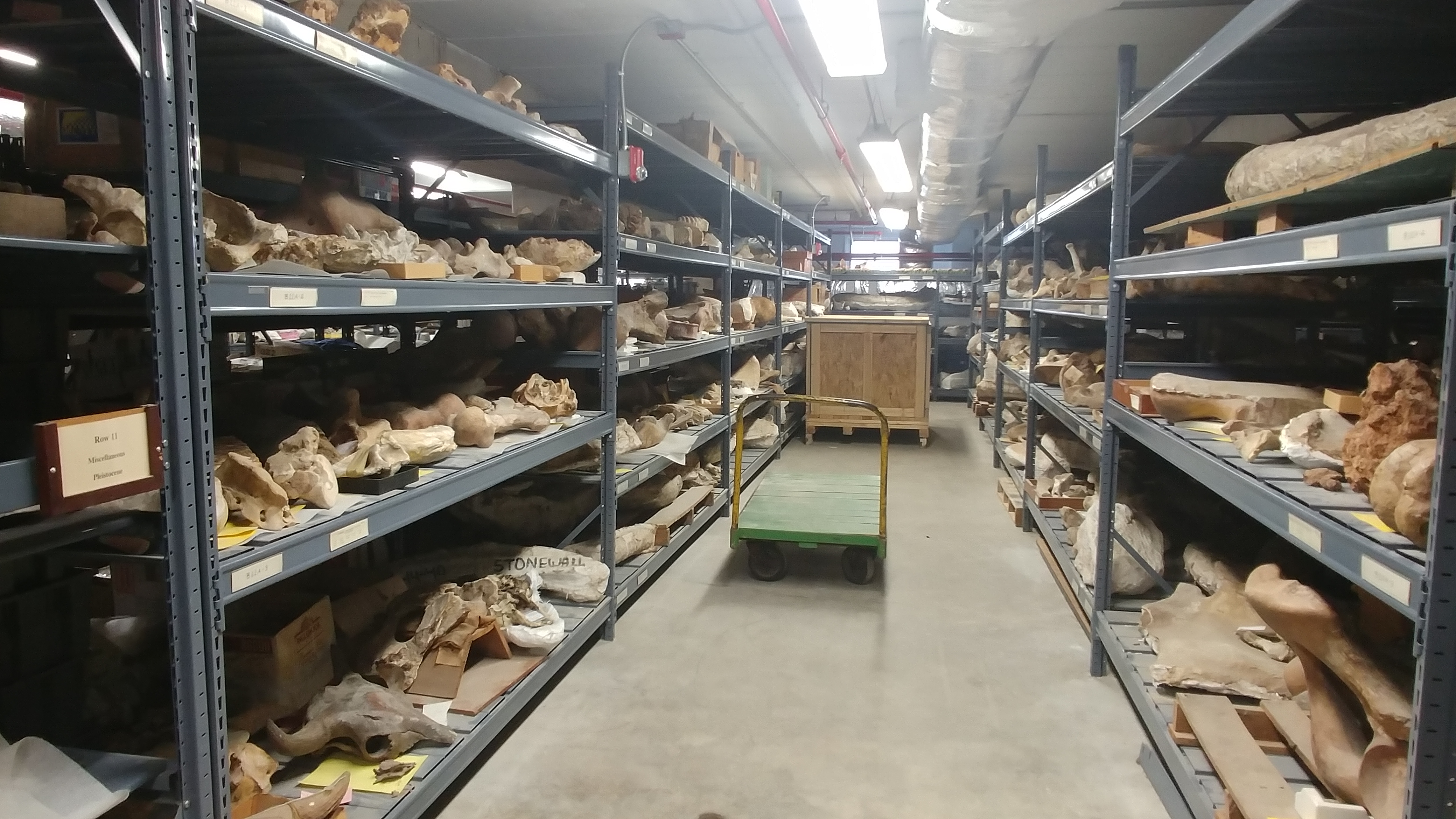 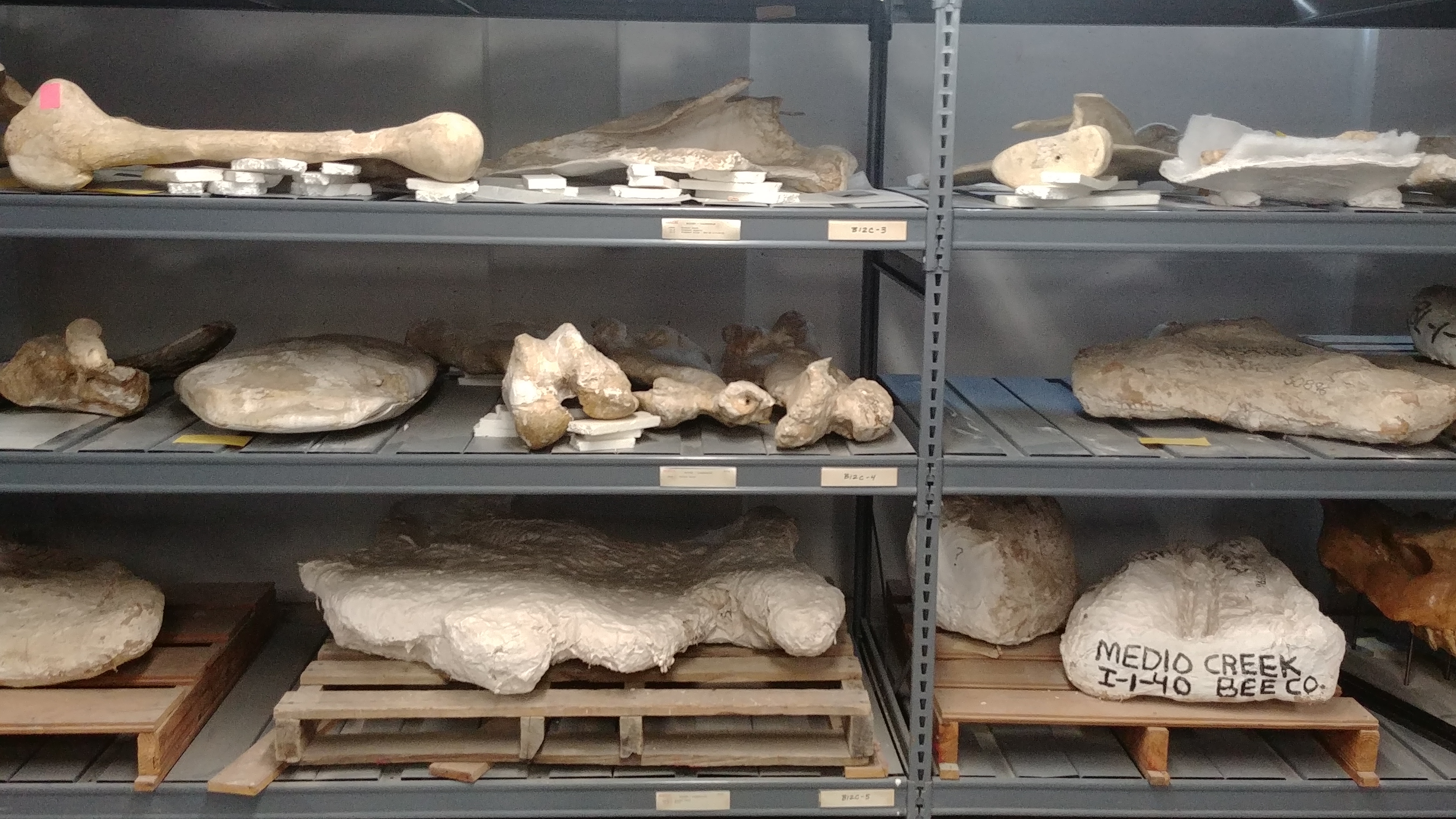 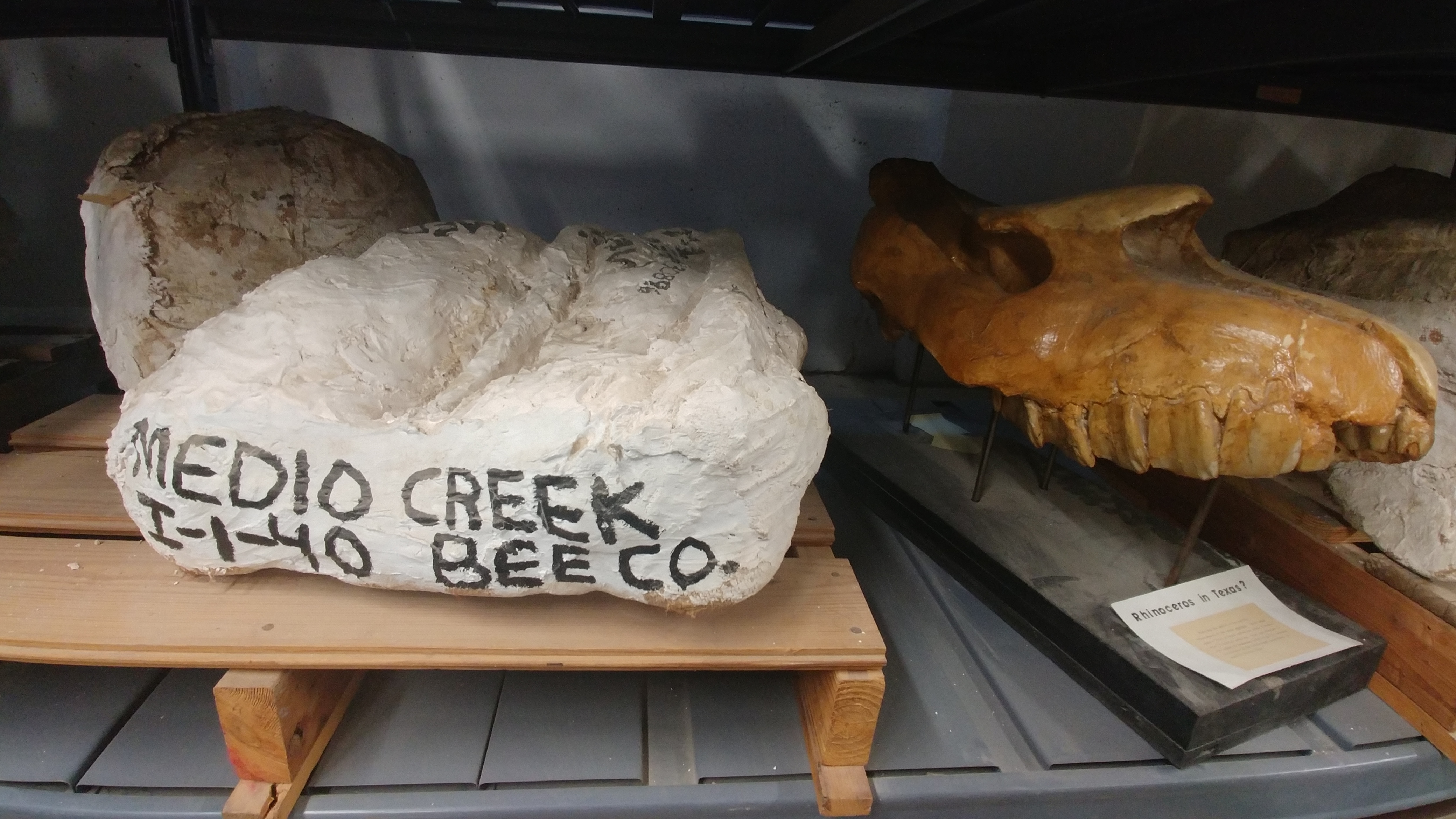 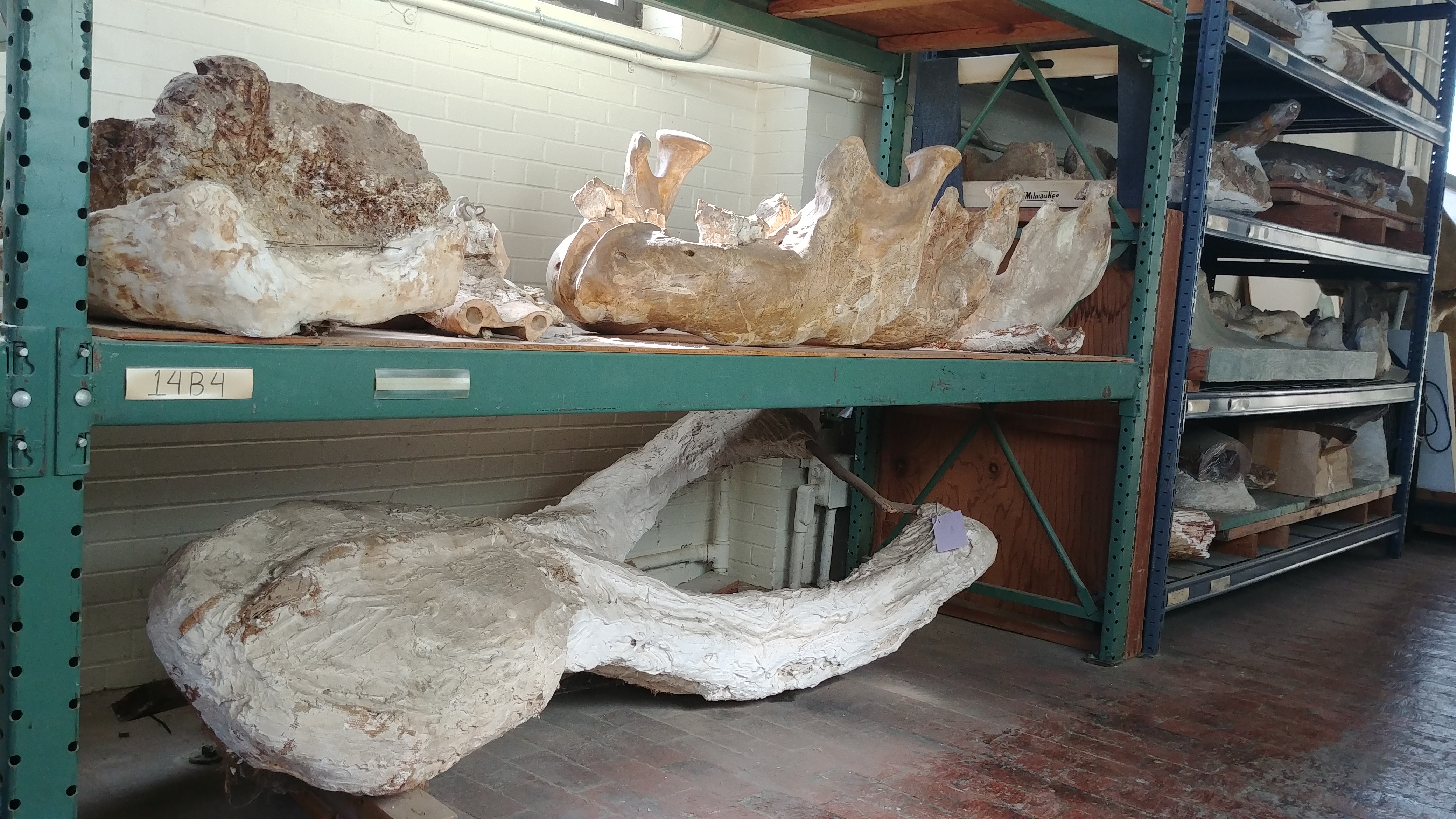 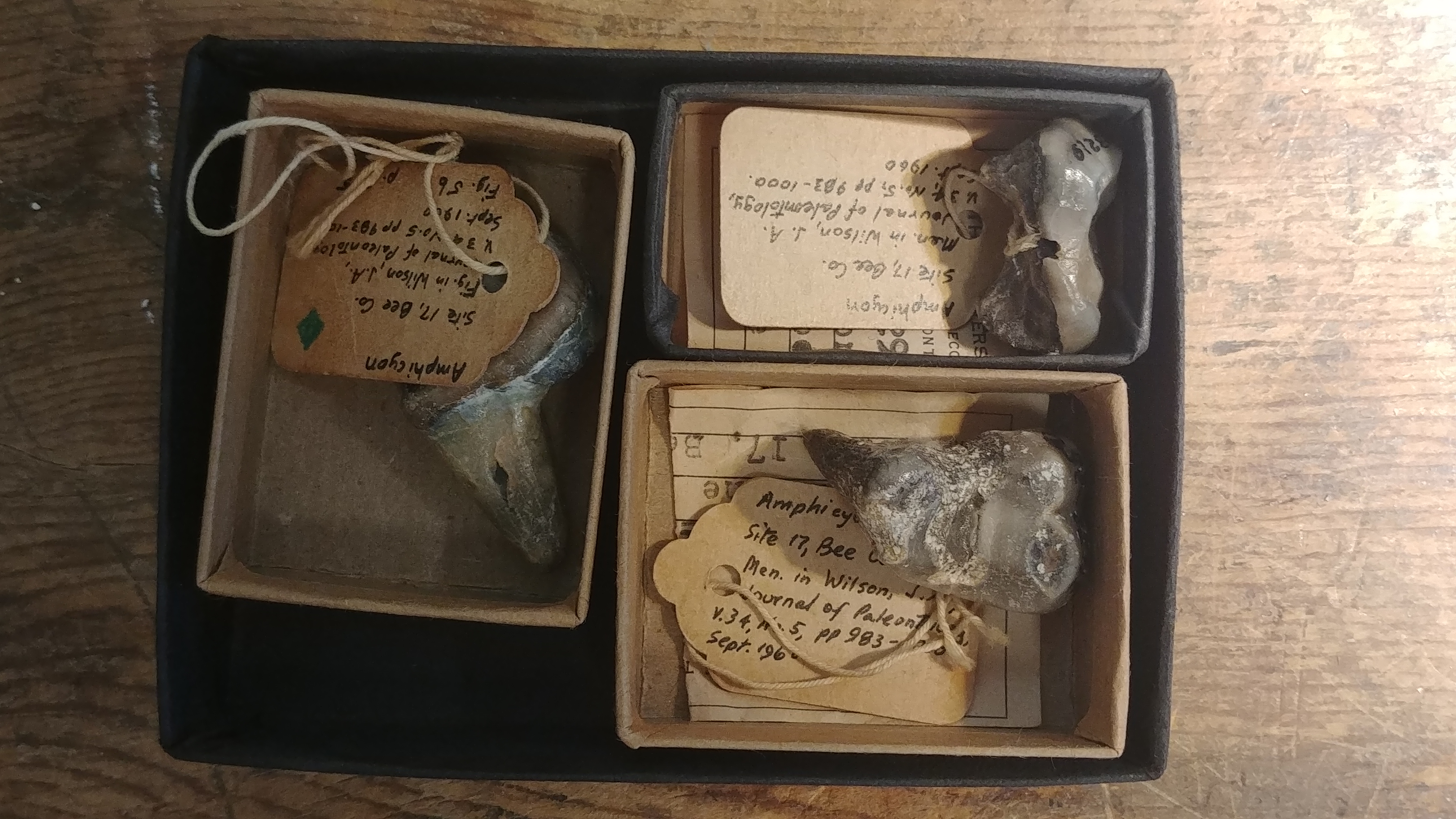 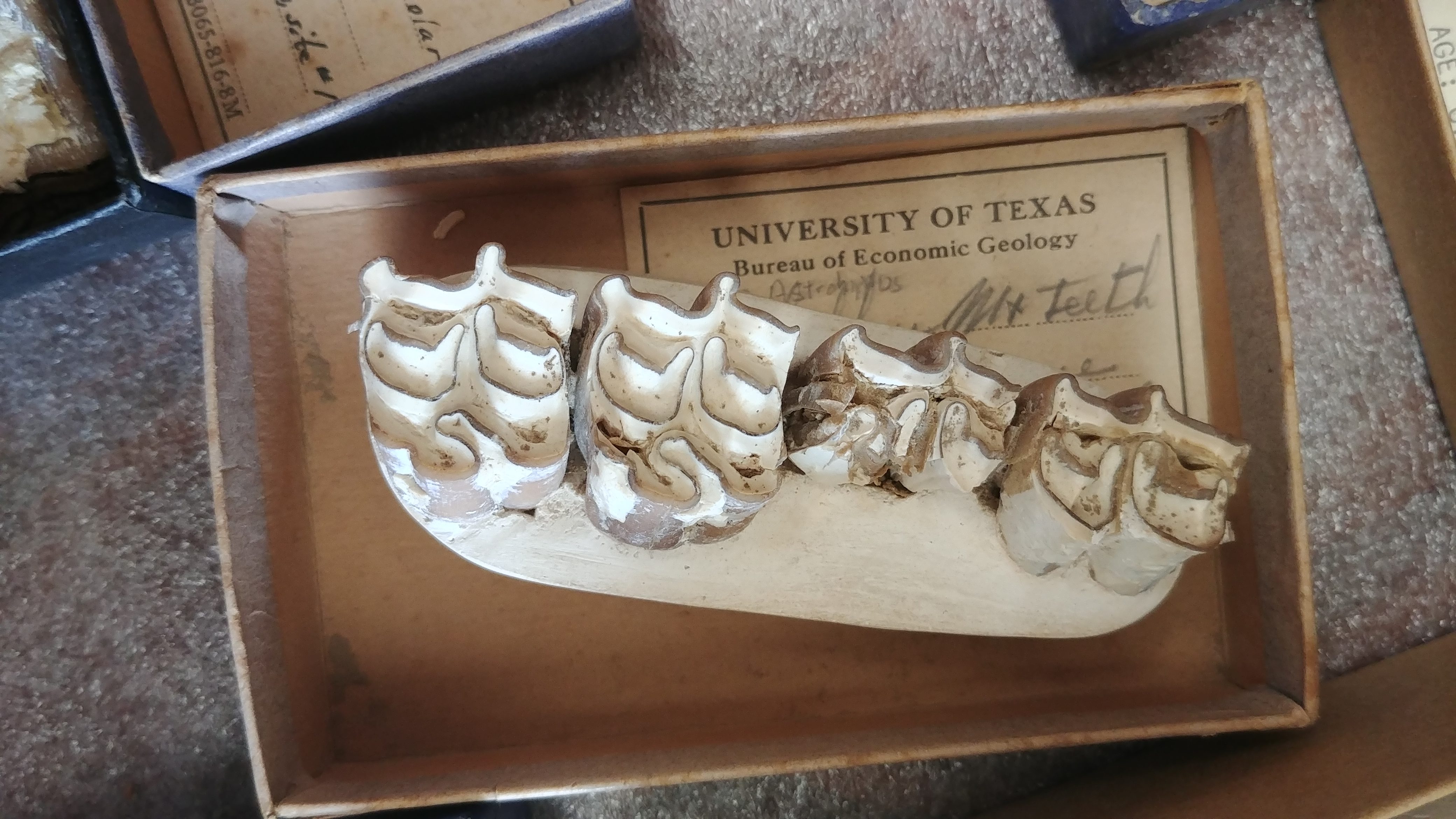 Fossils in the Jackson School Museum of Earth History's vertebrate paleontology collections. From left: Skull parts from elephant relatives; an extinct rhino jaw and shoulder blades; teeth from ancient horse species; a view of the collections basement; a wall of WPA-era fossils; A WPA-era fossil from Bee county in its field jacket beside a rhino skull; the skull of a shovel-jawed gomphothere (pictured on bottom) still wrapped in its field jacket; teeth from an extinct bear relative; a jaw from an extinct horse species.

Despite lasting only three years, the survey found and excavated thousands of fossils from across Texas including four dig sites in Bee and Live Oak counties, with the majority of their finds housed in what is now the Texas Vertebrate Paleontology Collections at the Jackson School Museum of Earth History. Over the years, a number of scientific papers have been published on select groups of WPA specimens. But May’s paper is the first to study the entire fauna.

This extensive collection of fossils is helping to fill in gaps about the state’s ancient environment, said Matthew Brown, the director of the museum’s vertebrate paleontology collections.

The emphasis on big mammals is due in large part to the collection practices of the fossil hunters, most of whom were not formally trained in paleontology. Large tusks, teeth and skulls were easier to spot – and more exciting to find – than bones left by small species.

“They collected the big, obvious stuff,” May said. “But that doesn’t fully represent the incredible diversity of the Miocene environment along the Texas Coastal Plain.”

In order to account for gaps in the collection, May tracked down the original dig sites so he could screen for tiny fossils such as rodent teeth. One of the sites was on a ranch near Beeville owned by John Blackburn. Using aerial photography and notes from the WPA program stored in the university’s archives, May and the research team were able to track down the exact spot of an original dig site.

“We’re thrilled to be a part of something that was started in 1939,” Blackburn said. “It’s been a privilege to work with UT and the team involved, and we hope that the project can help bring additional research opportunities.”

Scores of WPA-era fossils in the UT collections are still secured in plaster field jackets, waiting to be unpacked for future research projects. Lab managers Deborah Wagner and Kenneth Bader are supervising their preparation, which includes teaching UT students fossil prep skills so they can pick up where the WPA workers left off.

Wagner said that the advantage of unpacking fossils decades later is that they are able to apply modern research techniques that scientists from past eras wouldn’t have dreamed possible.

“We are able to preserve more detailed anatomy and answer questions that require higher resolution data,” she said.

May said that he plans to continue to study the fossils as more are prepared.