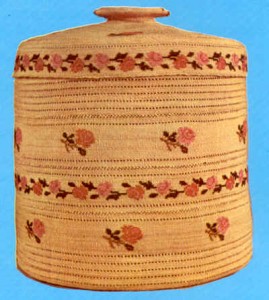 Glen Evans was an important part of the Texas Memorial Museum’s history in many ways. Not only did he provide many well-documented samples in all parts of the collections derived from his own field research, but he was also instrumental in obtaining other collections for the Museum.

His ability to observe closely, and be excited by, all forms of art and natural history objects led him to genuinely express that interest in such a way that the owners of many rare collections gave them to the Museum:

“The Aleut, who love on the foggy Aleutian Islands of southwestern Alaska, are justly famous for their brightly decorated and finely woven twined basketry.

Aleut basketry is made from sea grasses, principally wild barely and wild peas, that grow on the sand bars along the shore. The grasses are collected in the summer and stored in dry, rocky caves until winter, when most of the weaving is done. The grass blades are split with fingernails, into very fine strands, and these are the weaving elements that give Aleut basketry its delicate appearance. Some of the baskets have the texture of a fine grade linen cloth…Many designs on the baskets are copies of motifs introduced by the Russians before the United States purchased Alaska.” (Taken from pg 62-63, Museum Notes #11)

The TMM has acquired more baskets since then, but the Seashore component remains the most extensive portion of the collection.

Glen Evans was strongly connected to the Museum for 13 years.  Between 1941 and 1953 he was appointed as Assistant and later Associate Director of the Museum. During this time much of Glen’s efforts were directed towards the search for strategic war-related minerals, as well as the excavation of numerous archeological sites. Most of the specimens collected during his field work are now housed in the Museum and in the Texas Archeological Research Lab.