Structural diagenesis is the study of the relationships between deformation or deformational structures and chemical changes to sediments. Structural diagenesis supports research and student training on the increasingly important phenomena in sedimentary basins that are of great intrinsic and practical interest. The linked geochemistry and structure research program based at the Bureau of Economic Geology is a central part of the program. 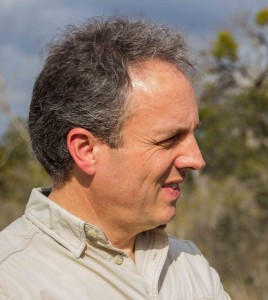 Dr. Peter Eichhubl is a leader in linked geochemistry and mechanics research within The University of Texas.

Eichhubl’s research combines the fields of fault and fracture mechanics and low-temperature geochemistry addressing deformation mechanisms of the upper crust, structural control of mass and heat transfer in sedimentary basins, effects of chemical mass transfer on the mechanical and hydraulic behavior of fractures and faults, and the chemical interaction between fluids and minerals.

Eichhubl’s research is of applied interest to groundwater management and the exploration and production of hydrocarbons.

Fundamental aspects of the research have implications for the seismic and aseismic deformation of the Earth’s upper crust and for the interaction of subsurface fluids with the atmosphere and biosphere.

Research combines the fields of fault and fracture mechanics and low-temperature geochemistry addressing deformation mechanisms of the upper crust, structural control of mass and heat transfer in sedimentary basins, effects of chemical mass transfer on mechanical and hydraulic behavior of fractures and faults, and chemical interaction between fluids and minerals.

The following papers outline some of Eichhubl’s current research interests: 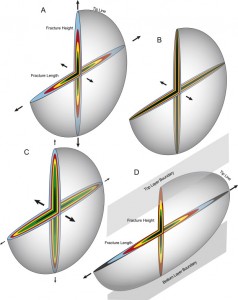 Eichhubl continues to be involved in work on deformation bands. 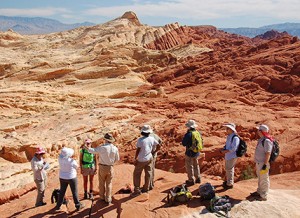 In 2014 Eichhubl led a structural diagenesis field symposium in Utah.

Dr. Eichhubl supervises graduate student research in mechanics and geochemistry in the Jackson School of Geosciences.

Geochemistry and Mechanics Research at BEG

The framework of fracture mechanics is essential to understand fracture pattern evolution but geochemistry plays an equally important role in understanding fracture processes in the subsurface.

A program goal is understanding mechanical and chemical processes and how they interact.

Chemical-mechanical interactions influencing fracture initiation, growth, and coalescence pose a first order control on the time and deformation rate dependent failure of rocks and the development of fracture networks. For example, in the subsurface subcritical fracture growth may lead to time-dependent or progressive failure. Mechanical effects occur almost simultaneously with deformation, while chemical effects occur over longer time scales. Understanding these coupled effects and what controls their spatial and temporal impacts will lead to new insights on the evolution of fractures over all time scales. These processes are relevant to natural and engineered systems, such as fault zone development, advanced recovery of hydrocarbons, storage of CO2 and waste fluids, ore forming processes, and managing geothermal reservoirs. 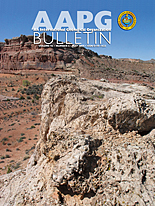 The aim is to further develop an understanding of fractures.

Eichhubl’s page on the JSG site

Information about the SEM CL Facility