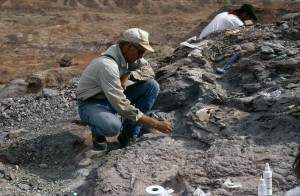 The Vertebrate Paleontology Collections have been built through active field research program for more than 125 years. Today, our program offers many opportunities for students to gain field experience. Thanks in large part to field work by our graduate students, nearly 500,000 specimens have been collected from Texas, the American Southwest, Mexico and other parts of the world.

The first significant field collections were made from 1890 to 1894 by Professor William F. Cummins for the Texas Geological Survey, which was then under the direction of Edwin T. Dumble.  The preeminent paleontologist E. D. Cope reported on these collections of Permian, Triassic and Cenozoic fossils from the northern part of the state.

Between 1939 and 1942, the Work Projects Administration (WPA) funded the collection of approximately 11,100 specimens in a huge regional effort directed by Dr. Elias H. Sellards. At that time Sellards was director of the Texas Memorial Museum and he managed an average of nine field crews at any given time that collected fossil vertebrates at different locations across Texas. Approximately $300,000 was invested in this effort. The WPA collection includes specimens from Permian and Triassic terrestrial sediments of North and Central Texas, from Tertiary terrestrial sediments of the Gulf Coastal Plain, from Tertiary terrestrial sediments of the Texas Panhandle, and from Pleistocene deposits throughout the state. 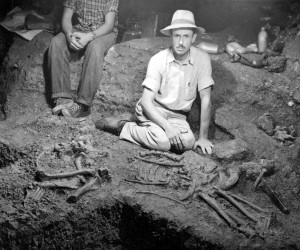 In his exploration of Friesenhahn Cave, Dr. Grayson E. Meade began a series of cave excavations in 1949 and 1951 that have produced some of the most significant fossils in our collections, including the complete skeletons of adult and juvenile scimitar-toothed cats.  Dr. Russell W. Graham (now Director, Earth and Mineral Sciences Museum, Penn State) wrote his dissertation on specimens he collected from this locality in 1973 and 1974.

Professor John (Jack) A. Wilson, winner of the 2000 Romer-Simpson medal, set a high standard for field research in West Texas and Mexico. Jack’s collections are the foundation of numerous Masters and Doctoral projects and among the most significant of our holdings. Many of Jack’s students remain highly active in field work in West Texas and Mexico.

One of our current research projects involves research in Early Jurassic sediments of the lands of the Navajo Nation, in collaboration with the Navajo Eco-Scouts program. In this project, UT graduate students have been involved in the discovery and excavation of new specimens and new species of extinct vertebrates, in one of the most beautiful and rugged regions of the world.

We are committed to an active field program throughout western North America, and to building premiere collections of fossil vertebrates from a wide range of Mesozoic and Cenozoic deposits.