Through visiting scientist appointments at The University of Texas, Bonnell and Lander collaborate with geoscientists and engineers from the Bureau of Economic Geology and the Departments of Petroleum and Geosystems Engineering and Geological Sciences in the Structural Diagenesis Initiative to explore the use of sandstone diagenetic modeling to predict the characteristics and evolution of fractures. Methods build on Bonnell and Lander’s expertise in sandstone diagenesis, petrophysics, basin modeling, computer simulation methods, and risk assessment. Linda Bonnell and Rob Lander are Geocosm’s principal scientists; information on their work on reservoir quality prediction can be found on the Geocosm page. 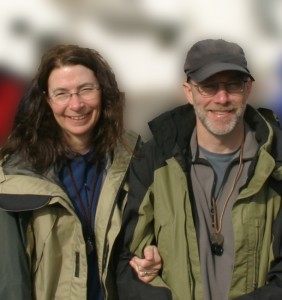 In Bonnell’s AAPG Distinguished Lecturer tour in 2003 and 2004 she discussed the state-of-the-art in reservoir quality prediction technology as well as research on the interaction of quartz cementation and fracturing that is being done in collaboration between Geocosm and Fracture Research and Application Consortium (FRAC) at The University of Texas at Austin. Linda has published a number of papers touching on various aspects of diagenesis, and co-authored a 2009 paper that was recognized as at Notable Contribution for that year to AAPG Bulletin. She currently is an Associate Editor of the AAPG Bulletin.

Lander works with diagenesis and petrophysical models and co-invented Geocosm’s Prism2D and Touchstone models and other software and has worked extensively with basin models and geochemical reaction-path models.  He also developed Geocosm’s COAN code for quantitative image analysis of grain coating characteristics.

Lander was the 2015 Haas-Pratt Distinguished Lecturer for AAPG. He presented Model the Rock! Using Diagenesis Simulation for Rock Property Prediction.

Lander has published numerous scientific papers. He co-edited a special issue of the AAPG Bulletin on reservoir quality prediction in sandstones, was a co-convener with Laubach of the AAPG Hedberg Conference Structural Diagenesis: Fundamental Advances and New Applications from a Holistic View of Mechanical and Chemical Processes, and gave a keynote talk on the state-of-the-art in sandstone diagenetic modeling at the SEPM Diamond Jubilee Symposium at the 2001 AAPG/SEPM meeting.

Lander and Bonnell won the prestigious Wallace E. Pratt Memorial Award for the best paper published in the AAPG Bulletin in 2010.

In 2004 Lander was awarded the prestigious DOE Basic Energy Sciences Best University Research Award at the US Department of Energy Symposium Flow and Transport: from Pore to Reservoir Scales for aspects of the collaborative work within the Structural Diagenesis Initiative.